When traveling, certain days can spur a sense of homesickness…birthdays, holidays, anniversaries. At the same time, days, weeks, or even entire months that may never have had much particular meaning can become anew as you learn about events that are special in other cultures.

In the South Pacific, that event was Heiva.

Mark and Helen’s departure just before the 4th of July weekend left us a bit lonely, so when Independence Day rolled around and we knew our friends and family were celebrating on the other side of the globe, we donned our stars ‘n stripes, cracked a “special beer” (a favorite we had schlepped all the way across the Pacific with us), and started to get excited about an event that was taking place just a dingy ride away.

We had bounced around the Society Islands for a month after our passage from Raivave…from Tahiti for repairs and our friends’ arrival to Moorea for the PPJ Party to Bora Bora, which is where we lucky ducks spent the final days of Heiva.

Chances are, you have heard of Heiva; I certainly hadn’t until we arrived in French Polynesia. Now you have, add it to your bucket list! What’s not to like about a weeks-long fête of music and activity in one of the most beautiful places in the world?! For two months over summer, the already colorful islands of French Polynesia explode in a festival of traditional dance and sport competitions, handicrafts, and food. Each island hosts its own Heiva festivities, but the largest events occur on Tahiti and Bora Bora.

We weren’t really sure what to expect when we dinghied ashore to enjoy Heiva festivities. As we wandered the dirt path that runs alongside the only road encircling Bora Bora, we were surprised to discover a pop-up village and arena built exclusively for that summer’s events! Restaurants made from palm fronds and other materials were among the competitions, with each being judged against the next on décor. We learned the village had also included a disco, which had sadly burned down several days prior…

For more than half a century in the 1800s, many aspects of Polynesian culture, including traditional dance were forbidden by shrewd, puritanical missionaries. Thankfully, those days are long past, and the people of French Polynesia are free to celebrate their vibrant, beautiful culture. Heiva is all about sharing culture with community, with younger generations and, fortunately for us, with tourists who are exploring the lovely islands of French Polynesia.

The night we attended Bora Bora’s Heiva, five large dance troops were competing, each representing a district from around the small island. Heiva dancers are not professionals; rather, they are local people who devote evenings and weekends months in advance of the festival to ensure their cultural dances continue to flourish. Each dance troop is responsible for designing and creating its own costumes, choreographing its dance routine, and producing the music for the performance. An immense amount of effort is required to get so many bodies to move in sync!

There were several different categories of dance presentation the night we attended. We watched the himene, in which a large choir danced the rhythmic aparima dance. Then, we watched several groups perform the hip-shaking ote’a, the dance most foreigners imagine when they think of Polynesian dance, which was accompanied by drums and percussion instruments. Each group involved dozens of dancers, the largest of which was crowded with upwards of a hundred men and women stamping and swaying across the dirt-floor arena beneath flood lights!

During the Himene, women wore loose-fitting red floral gowns and an immense crown of white flowers. Men wore a leafy wreath atop their heads, short-sleeved shirts, and a pareu around their waists made from the same fabric as the women’s dresses. The performers swayed and sung acapela. Their voices echoed into the night sky as the group circled around the chorus chief and swayed back and forth singing at the top of their lungs. Every so often, a soloist would rise above the other voices sending powerful, high-pitched calls across the choir. It was beautiful. 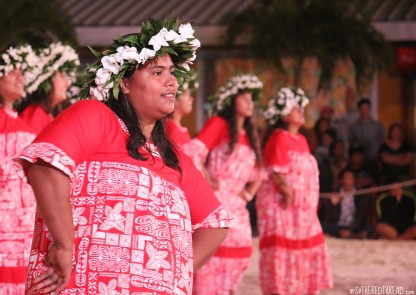 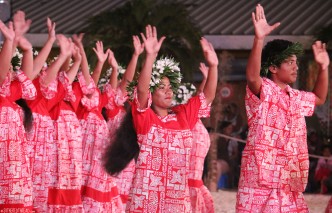 The swift, rhythmic ote’a is was mesmerizing a feast for the eyes that exploded with energetic playfulness and sensuality. Palm fronds shook on women’s hips and the bare knees of men gyrated at a dizzying pace. There were long shell necklaces, gloriously gawdy crowns of flowers, feather-clad wristlets, coconut bras and seashells, grass skirts woven of palm fronds, and tie-dyed pareus.

In addition to being a tribute to culture, the performances also struck me as a celebration of the human form more generally. In western culture, it is often only the bodies of young women and men that are celebrated. Although the majority of Heiva dancers were young adults, people of all shapes, sizes, and ages moved their bodies proudly. The lines of motherhood stretched across the bellies of some dancers and a few silver hairs glistened beneath the lights. Tattoos decorated the arms and chests and backs and bellies of dancers. Even children participated in one of the dances, which was cute as could be! Heiva was an entertaining experience and a visual and auditory feast of authentic Polynesian culture. 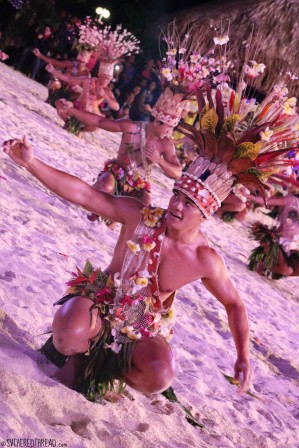 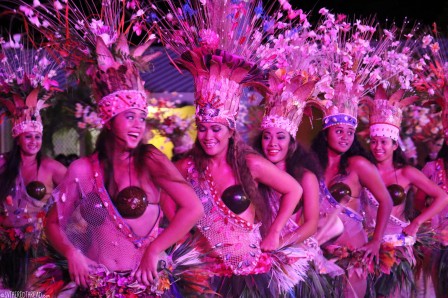 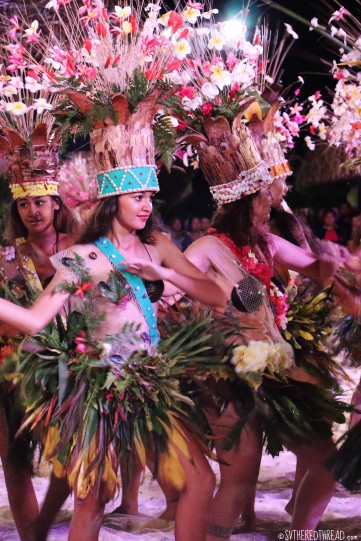 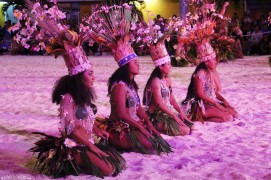 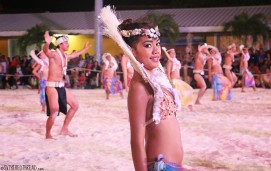 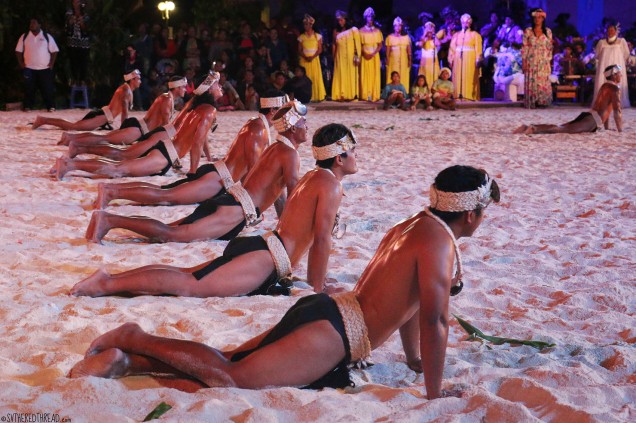 The photos I captured do not do the experience justice. Clearly, I need to up my game when it comes to low-light evening photography! I hope you enjoy, nonetheless!!

If you’re thinking of traveling to French Polynesia, consider planning your trip for July to coincide with Heiva! If you are a cruiser, it’s a happy coincidence that July is prime time to be in heart of the South Pacific!