Sometimes passages are to be settled into, like a long road trip; others are just about getting somewhere, like driving a car across town. This was the latter. We had bypassed several of the Society Islands during our passage from Moorea to Bora Bora during Mark and Helen’s visit, and although we knew we didn’t have time to see them all, we knew we’d regret not seeing a bit more. Thus, we were traveling backward, if you will, half-a-day southeast to Raitea and Taha’a, sister islands encircled by a shared coral reef.

Four knots of breeze was hardly enough to tickle the tiny hairs that stretched along my arm and certainly not enough to propel our 15-ton boat. The iron sail would have to do and, in any case, we needed to make water (something we can only do when running the engine or Honda 2000i generator) and the batteries were hungry for a hard charge. The swells were reasonably long but running at two meters, just enough to churn my stomach. I had clearly been spoiled by the tranquil waters of Bora Bora and felt worse than usual in the relatively benign conditions. I spent a while lying in the cockpit, somber and useless, albeit content.

Within a couple hours, my belly settled, the breeze freshened and I set about rigging up a new fishing line. It had been a few weeks since we’d hauled a fish aboard, and we were both [constantly] craving tuna tataki.

Raiatea: The Sacred Island
By the time we entered the reef pass, having had luckless fishing, thick gray clouds blanketed the sky, dimming the late afternoon light. Too many bommies left us feeling uneasy when we tried to anchor near Apooiti Bay, so we grabbed a mooring off Apooiti Marina instead.

The next morning, we rose early and motored around the northern arc of Raiatea to Uturoa, French Polynesia’s second-largest town. We snagged a mooring next to our pals on s/v Sarita. The price for a mooring varies substantially from place-to-place, and we were more than happy to pay the “6-pack of beer or Coca Cola per day” fare. 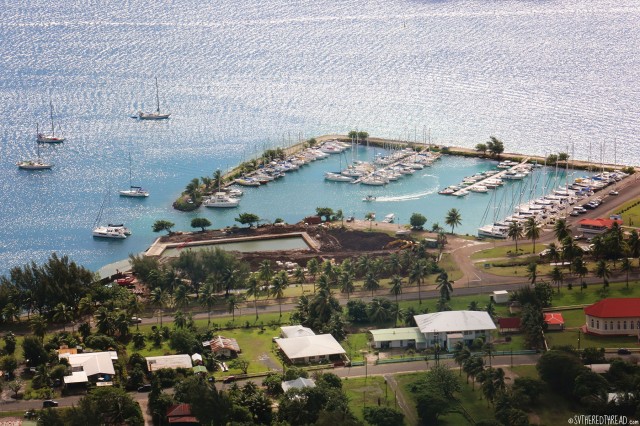 The crews of Sarita and Red Thread (the two vessels at the top of the mooring field) are happy neighbors with many board games to play and a few too many drinks to imbibe after dark! 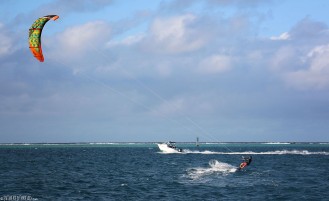 Ashore a fishing tournament was underway. A curtain of unicornfish, snapper, parrotfish and other beauties we didn’t recognize hung behind a shoulder-to-shoulder wall of men in boardshorts and flipflops. It was clear their attention was focused on the larger tournament catches, surely the likes of tuna, mahi mahi (dorado), and perhaps even billfish. 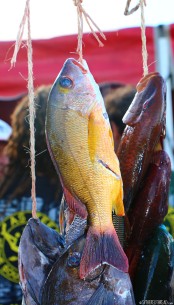 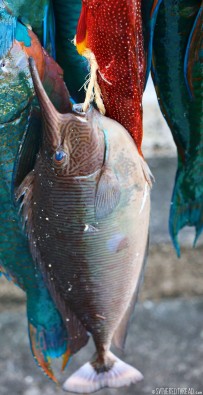 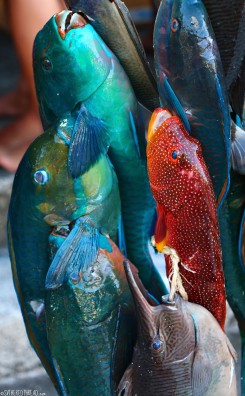 A little hike with banner views
Eager for a bit of exercise, we set out the next morning to climb Mount Tapioi, a 294-meter hill that stands unassumingly above Uturoa. The hike begins as a dirt track that is used by utility vehicles to service the red-and-white large antenna that decorates the summit like a birthday candle. If you’re unsure whether you’re headed the right direction, look for the candle. 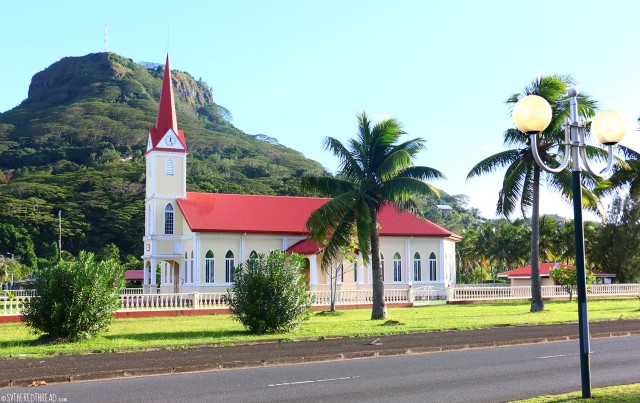 Note the “candle” atop Mount Tapio behind the church in Uturoa.

At just over 3 kilometers, summiting Tapioi only takes about an hour and requires a less-than-average level of fitness. For the meager energy and time investment, the payoff is as good as it gets. The views are breathtaking, arguably some of the best in all of French Polynesia, thanks to the island-clad seascape visible as you gaze toward three of the four points on the compass.

From the summit, Tapioi slopes downward across the outskirts of Uturoa and Raiatea’s airstrip. The sun shone like a torch on the reefs scattered across the lagoon, a reminder of how critical it is to navigate considerately. Raiatea’s little sister, Taha’a, squats contentedly due north, with bays that carve deep into her lush, round physique. To the east, the outline of the island of Huahine can be seen some 43 kilometers in the distance, etched above the horizon.

Most strikingly, however, is Bora Bora to the northeast. The volcanic peaks of Mount Pahia and Mount Otemanu clutched at tufts of cotton candy that floated above a summer sea so blue it could hardly be distinguished from the sky. Breathtaking. 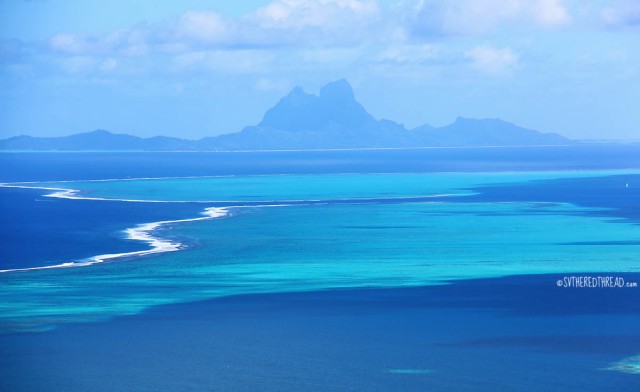 One of French Polynesia’s few wreck dives
In addition to being home to French Polynesia’s largest charter fleet, Raiatea’s lagoon is also final resting place of the S.S. Norby, a 50-meter 3-masted Danish Schooner that sunk in a storm in 1900. After discovering in Moorea that they are well-matched buddies, Neil was itching to dive again with Richard from s/v Sarita. I had never dove a wreck and made the [truthful] excuse that I felt rusty and, therefore, couldn’t be bothered to join. Besides, a couple hours on the boat alone sounded rather blissful. 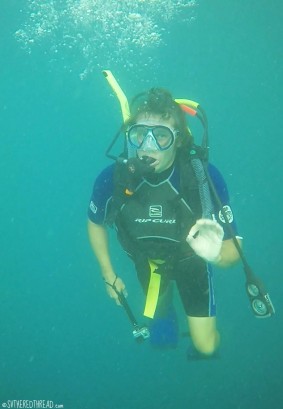 The two men loaded their gear into our dinghy and zipped off to find the dive site. Although our cruising guide suggested it would be fairly easy to find, the buoy was not easily found and, ultimately, they descended hoping they were in the right place.

More than a century in her watery grave, the S.S. Norby sits 29 meters below the surface. Visibility wasn’t ideal, but they found her. “Creepy” was the first word that came to mind for Neil to describe the wreck. The Norby rests on her side, and after more than one hundred years submerged, her topdecks have eroded away. This creates a spectacular hiding place, deep in the inky abyss that is her hull, for all manner of sea critters: huge lionfish, crabs, shrimp, snapper and more. Swimming before the blackness was spooky and Neil’s sixth sense felt as though something was lurking quietly watching him frog-kick by, wondering if he would be a tasty treat. Thankfully not, but wrecks can be an eerie experience even for the bravest souls.

Fa’aroa Bay
Raiatea stretches long and thin, 21 kilometers long from north-to-south and 12 kilometers at its widest point, and we were keen to explore more of the island’s natural beauty. The next morning greeted us ugly and overcast, which suited my mood. We motored 6 nautical miles south to Fa’aroa Bay, where the promise of dinghy exploration up the Fa’aroa river awaited. A couple boats were anchored in the bay, including an Australian catamaran named s/v Amarula, a unique vessel that looks like a delicious layer cake from a distance, whose crew includes two friendly humans and pair of charming pooches. They had enjoyed a lovely dinghy tour up the Fa’aroa River, which made us eager to explore the following day.

An 18- to 23-knot westerly made for a bumpy night of sleep, however, and the next morning we struggled to rustle up the ambition to head ashore. The winds had not abated when we at last hauled ourselves into the dinghy. There is apparently a dinghy path up the river, but as we began to traverse the rock-strewn water, we were in for a rotten treat and decided to abort the mission, which I later bemoaned in ink in the logbook:

We attempted to navigate up the river—French Polynesia’s only navigable river—and it was a disaster. We ran the dinghy aground, and I rowed furiously against current and 20-knot breeze until I tore a wound in my hand, while Neil held our outboard above the shallows (the tilt lock is broken). We had hoped to pick fruit up the river. We snapped at each other like a couple real assholes.

Alas, the Fa’aroa River may be navigable, but apparently not by us!!