September 1, 2012: 16 days to be dubbed our Engagement Sailcation

We rose with the sun and set out with the tides from Elliott Bay Marina that crisp autumn morning. Only one of us knew there was a ring stowed beneath the floorboards…. 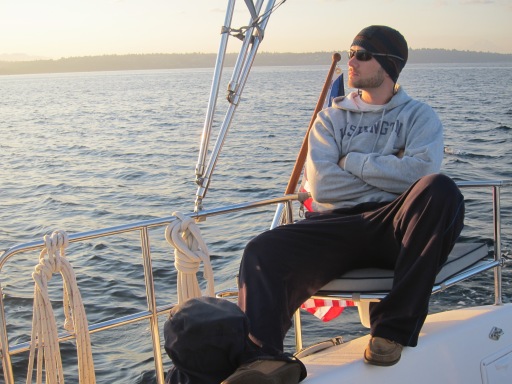 We traveled as far as Anacortes, WA, where we enjoyed an afternoon picnic with our good friends, the Maddox Family. 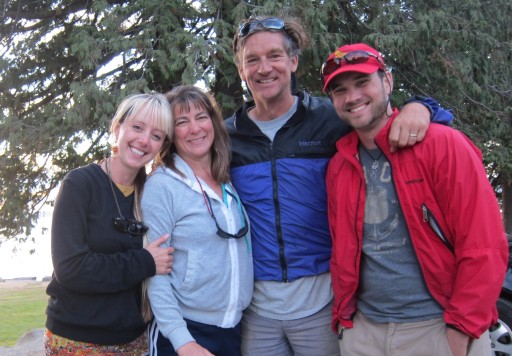 We arrived in beautiful Victoria, after sailing nearly the entire way from Anacortes! A spectacular day, complete with perfect wind. We cleared customs and docked for the night at the Wharf Street Floats. We were elated to raise our first courtesy flag and to fulfill a promise we’d made to each other before we ever purchased The Red Thread. We said that someday we’d sail into Victoria – and then we did! 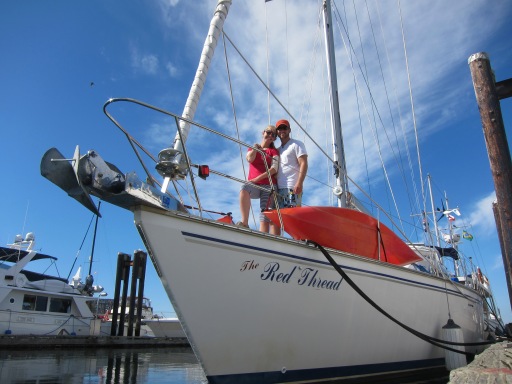 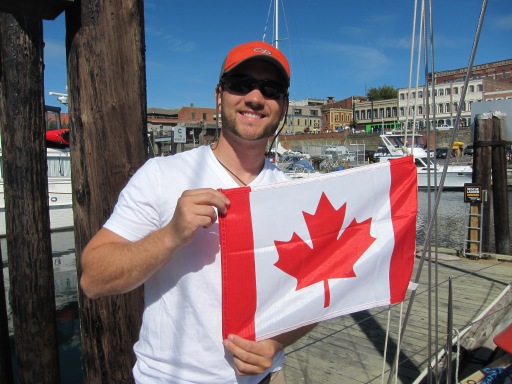 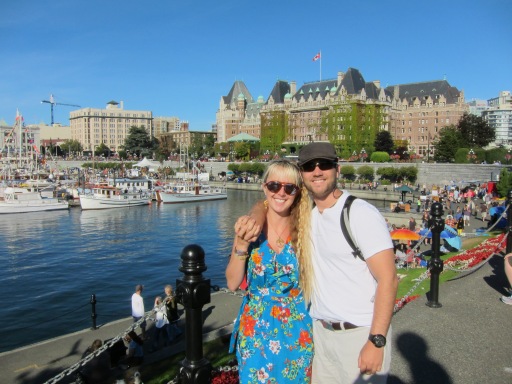 What a fantastic place! We anchored for the night and treated ourselves to dinner at The Treehouse Cafe, a one-of-a-kind restaurant that offers up live music under the canopy of a beautiful, sprawling tree. Upon returning well after dark to our dinghy, Miss Sassy Strings, we were frustrated to find her nearly completely deflated on one side! Deciding to trust the inflated side of our speedy outboard, we hurried back to The Red Thread! The only casualty from our dinghy ride back, Neil’s sunglasses, that fell overboard during a moment of stargazing! The next day, while underway, Neil found and patched the leak. Our little hot rod was back in business!

We tucked into quiet but crowded Degnen Bay as we rounded the southern tip of Gabriola Island. Most of the boats were empty and on mooring buoys. Initially it felt a bit like a ghost town of boats. We dropped our anchor and stern tied to one of the private docks, a kind offering by the only people in sight. Russell and Arabella became our friends that evening, and we enjoyed wine and sailboat stories with them late into the night.

The next morning, we set out across the Strait of Georgia. Whiskey Gulf, a missile testing range, was active, which meant that we had to take a longer route north before crossing the Strait. Seas were choppy, with 25-knot winds over the bow and waves stacking up to about 6 feet. Jessie spent a chunk of the crossing on the verge of paying homage to King Neptune. Needless to say, a tasty boat breakfasts like the ones we’d enjoyed during the preceding days was not to be had. Stale rolls would have to do!

September 6, 2012: Nearing the crown jewel our our journey!

After a night tucked away in Green Bay, a lovely anchorage just off Agamemnon Channel, we set out for the crown jewel of our voyage, Princess Louisa Inlet. The Sunshine Coast lived up to its nickname that morning. We saw few boats as we made our way north past Egmont BC toward Jervis Inlet. 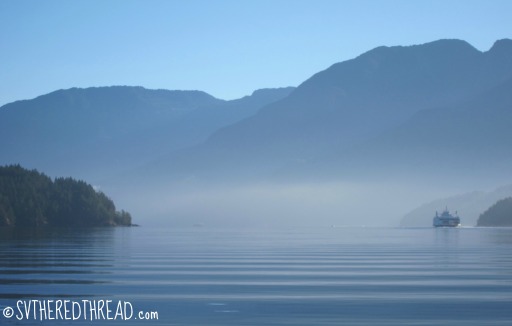 Touted as being one of the most beautiful fjords in the world, there was certainly not a shortage of spectacular views as we neared Princess Louisa Inlet. Little did I know that Neil had a diamond burning a hole in his pocket, as he casually scouted Malibu Rapids and the entrance to the Inlet.

The 30+ miles up Jervis Inlet were a treat. Although the lack of wind mean that we could not sail, we reveled in Mother Nature’s gift of sunshine and nearly 80 degrees (Fahrenheit). We took to referring to the Inlet as our Canadian Caribbean, and we found ourselves swooning at the sheer beauty that seemed to grow richer with every mile. After passing through Malibu Rapids, we had arrived. We had made it to Princess Louisa. The music of rushing water echoed throughout the fjord as we neared Chatterbox Falls and tied up at the small, nearly empty dock. Incredible; nothing short of incredible.

…and then late that night, tucked together in our hammock over the bow, Neil proposed.

Waking up engaged was a magical feeling! In a place so remote that it is only accessible by boat or seaplane, cell phone service was a modern-day amenity that we lacked. Ironically, it felt liberating to revel in our new commitment privately. Well, almost privately. We excitedly shared our news with the few boaters who, like us, had made Chatterbox Falls their home for a few days. Mostly, we relished our news together. We wandered the trails, lounged in our engagement hammock, and talked about our dreams for the future.

After several days without cell service, we crept back toward civilization and were overjoyed to share our BIG news with our loved ones! The outpouring of love and support we received from all corners of the US added to our high, leaving us in a perpetual state of happiness.

Pender Harbour is stunning, with one little crook and cranny to explore after the next! We anchored off and watched the sun slip away from our day. A subtle breeze shifted to a heavy winds late into the night, and we decided to let out more scope. As we tried to release more chain, we realized the windlass wasn’t working. Troubleshooting quickly led us to the culprit: our batteries were not charging properly, and we didn’t have sufficient power to operate our windlass! We realized we either had a problem with our alternator or regulator, a problem we weren’t going to be able to resolve that night. We manually released more chain and spent the remaining hours before dawn night restless, waking up frequently to check on things.

We accepted that fixing our boat would not be feasible right away, so we made the most of the time we had left in Canada. We docked, plugged into shore power, and kayaked and explored much of the next afternoon, with plans to repair The Red Thread at our first port in the US.

After leaving Pender Harbour, we hooked up to a mooring buoy in Montague Harbour on Galiano Island. We dinghied to shore hoping to catch the “Pub Bus” to the Hummingbird Pub. Seeing that we missed it, even after trying to make chase after the bus, we hitchhiked with a local man the 4-5 miles to the Pub. After some expensive and rather mediocre food, we hopped the Pub Bus back to the dock. It was the most amusing, frightening, and psychadelic bus ride we’ve ever had, as the driver spun glow sticks around his ankles (yes, while driving) and banged on cowbells and tambourines, all to a 70s acid rock soundtrack! This is an adventure not to be missed…but also not for the faint of heart!!

Poet’s Cove on South Pender Island is a magical little place. Included in the cost of guest moorage is full access to all of the luxuries of the resort, including a heated swimming pool and hot tub. We felt like we were in high heaven to be able to relax in the sunshine poolside! We also enjoyed going on a brief hike to an old church and exploring the wooded area.

The days were long and the sunsets incredible…

From South Pender Island, we made our way to Friday Harbor on San Juan Island, where we cleared customs and spent the final night of our voyage. The next day was devoted repairing The Red Thread, with the help of our good friend, Glenn. From there, we made our final push home, where new jobs and the rest of the “real” world awaited us.

Click here to learn more about the places we visited!

On a beautiful afternoon in mid-January, we sailed through the d'Entrecasteaux Channel (Tasmania) beneath the shade of our jib. We had 15 to 18 knots of breeze behind us and made 5.5 knots, even though the tide was against us.
This baby boy will never remember a time when a woman was not in the Whitehouse. #rejoice
After a lovely sail back into Hobart a few days ago, it's time to get to work. It's going to be an odd week seeing Red Thread without a mast...we are motoring up the Derwent River to haulout, drop and inspect the mast, replace the rigging, antifoul the bottom, complete some gel coat repairs, wax the hull, and a dozen other jobs.
"PANTS OFF! PANTS OFF!" he shouted as we got to the beach. It didn't matter that the water was frigid or the air temperature in the mid-60s, he wanted to run free.
How good it felt to start off 2021 afloat and in nature. We rang in the new year quietly, with wee Sawyer asleep in the aft cabin and a gorgeous bottle of @bennettsonbellarine bubbly in our glasses. The tiny community ashore lit off a few fireworks and there was phosphorescence in the water. Pure, simple magic.
After a year spent mostly locked down and within a 5-km radius of our apartment in suburban Melbourne, with several months in which we were only able to go outdoors for an hour a day, I feel exceptionally grateful to be soaring into 2021 with my little family in a stunning corner of Tasmania. Our being here is the result of the sacrifices of thousands who did what it took to stop the spread of COVID-19 in Victoria, so we could freely travel here now. And "here" is so, so special. The sea and sky stretch in every direction and we could not feel more free.