The race from Papeete to Moorea was set to kick off at 10 am. Within a couple hours, dozens of boats participating in the Tahiti-Moorea Sailing Rendezvous would descend on Cook’s Bay. We figured our best chance at getting a good spot in the anchorage was to hightail it earlier than the rest of the fleet. After all, Red Thread is a very seaworthy vessel, but she’s not known for being quick! The only races she’s won were part of the summer Downtown Sailing Series at Elliott Bay Marina, where the “winners” were drawn from a raffle of course completers. Those were proper beer can races, where competitiveness was gauged on which boat seemed to be having the most fun. Go figure, we’d managed to win…twice!

We were also itching to leave Tahiti, pure and simple. Our dock lines were loose just after 9 o’clock.

We set off 30 minutes ahead of the signal horn in air so light, we didn’t even bother to hoist our sails. We hummed our way across the 15-nm stretch of water, grateful to be restarting our voyage with Red Thread in a better state than when we finished our last passage. We had tackled some important repairs in Papeete.

Before we knew it, we were gliding into Cook’s Bay on the northeastern side of Moorea, the breeze just perking up. Mark was perched on the combings, awestricken by serrated spires that tower 3,000 feet above the sea. We entered one of two bays that slice into the island’s northern coast, a space once occupied by peaks that would have balanced those that etch the island’s southern skyline—walls of volcanic crust—long collapsed into the sea or blown off in a violent detonation.

Today, Moorea is shaped like a heart, and perhaps fittingly so. She is the rough midpoint between the Americas and Australia—truly in the heart of Polynesia. 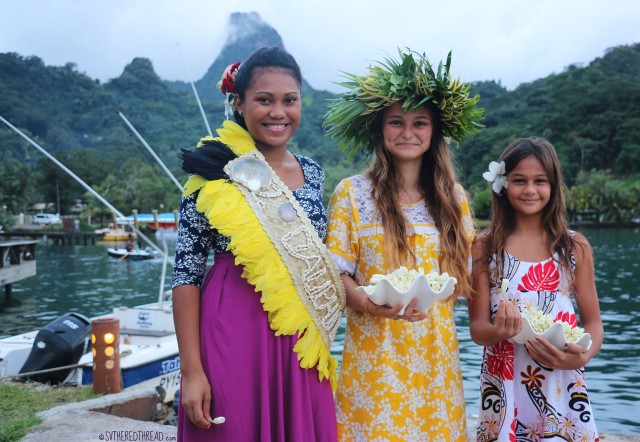 Pacific “puddle” jump?
The Tahiti-Moorea Sailing Rendezvous is the grand finale of the Pacific Puddle Jump, a loosely organized rally that offers a host of benefits to sailors, including bond exemption in French Polynesia (very helpful for the pocketbook!!), optional SSB safety check-ins during passages, and support for the organization of a fleet radio net. The annual 3-day rendezvous celebrates the safe passage of sailors across the largest body of water on earth, the Pacific. Our route was too far afield to take advantage of the nets. We were only able to connect once after departing the Galapagos.

Although many thousands of miles still remained before any of us could technically say we had traversed the Pacific, making landfall in Tahiti meant we had all completed our longest open-ocean passages of the crossing.

All roads lead to Tahiti
Most boats sailed from Mexico or Panama to the Marquesas, the northeasternmost group of islands in French Polynesia. We were outliers, opting instead to sail south from the Galapagos to Rapa Nui (Easter Island) and then on to the southern islands of French Polynesia, where cruisers roam less frequently. The traditional route requires a single, 3- to 4-week passage, whereas ours required two, 2-week passages in the more southerly latitudes where downwind passage is not a given, as we learned firsthand. For us, the party was a celebration of our accomplishment and of the achievements of our voyaging comrades! It also represented our convergence with the more well-trodden route—dubbed “The Coconut Milk Run.” 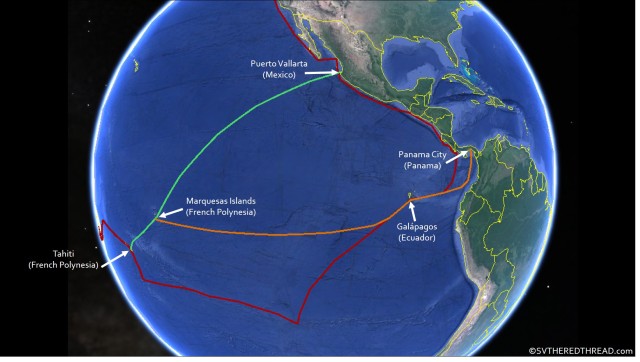 The typical west-bound routes are shown in green and orange; our route is in red.

Une fête polynésienne
The Tahiti-Moorea Sailing Rendezvous is coordinated by Tahiti Tourisme and Latitude 38, the California-based sailing magazine that was the mastermind of the catchy phrase “Pacific Puddle Jump” some decades ago. Over three days, sailors shared stories over chilled Hinanos—the tasty local beer—and enjoyed meals beneath the shade of palm fronds, accompanied by the rhythms of live music. For some cruisers, the party was the first time they’d met face-to-face with sailors whose voices they had heard on the radio for weeks or even months leading up to the rendezvous; for others, it was a reunion among friends who had departed the same port in the Americas. 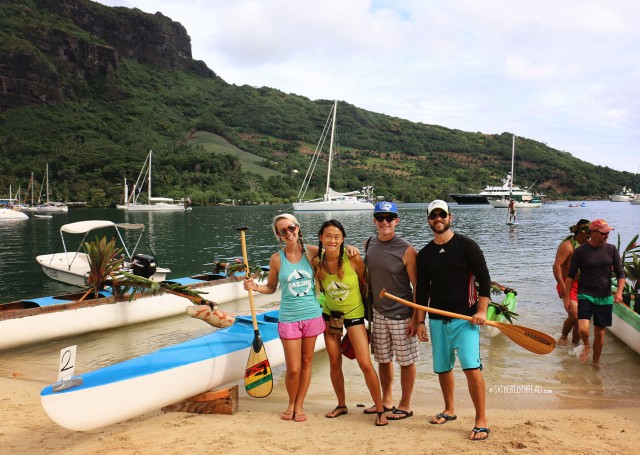 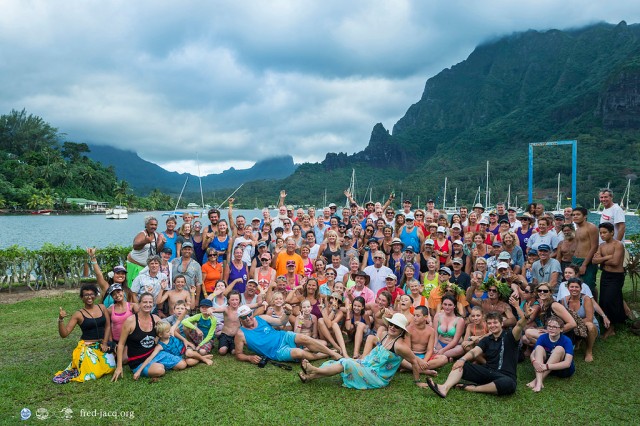 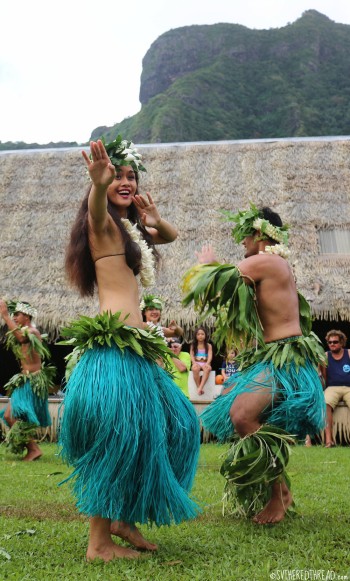 Each morning, we awoke to freshly baked baguettes delivered to the boat, a lovely complement to our steamy coffee. Laughter echoed across the bay from dawn to dusk. Children and adults alike experienced the fun of traditional activities that have been integral to Polynesian culture for centuries!

As the sun began to arc across the daylight sky, we puddle jumpers dinghied ashore and immersed ourselves in activities to test our skills at va’a (i.e., outrigger canoe) racing, coconut husking, stone lifting, and Tahitian dance.

When the daily afternoon drizzle subsided and the sun set, masthead anchor lights of our fleet were joined by twinkling stars. Over dinner, we were entertained by a troop of male and female dancers who twirled flaming batons and performed otea, vigorously shaking their hips to the feisty beats of island drums. Firelight danced on the bodies of the performers, sweat glistening on their chests and bellies.

Ooh, it would be an impossible task to determine whether it is the men or women of Polynesia who exude greater sex appeal!! 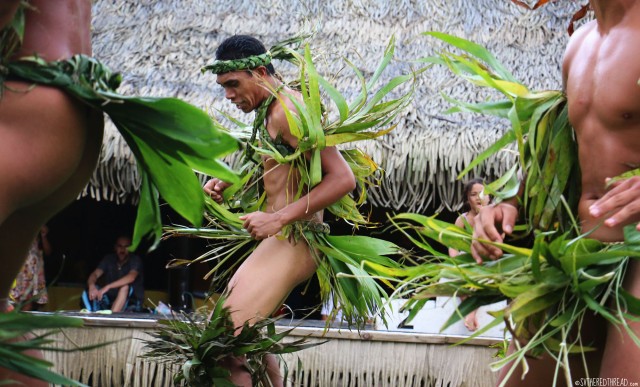 Let the games begin!
We learned that although tiny, Helen is exceptionally strong; that Neil is a natural coconut husker; that Jessie’s hips might have Polynesian potential, but only if we had another season to spend in French Polynesia; and that Mark may have a future performing ukulele covers in the tropics. We named our four-person va’a team “Legion of Boom” in honor of the Seattle Seahawks. True to their legacy, we performed best in the latter half of our race, making an impressive comeback but missing out on a trip to the semifinals by a mere second! If only we’d been able to rev up that “strong engine” (as our local va’a cap’n described Neil + Mark’s combined manpower) just a tad sooner! 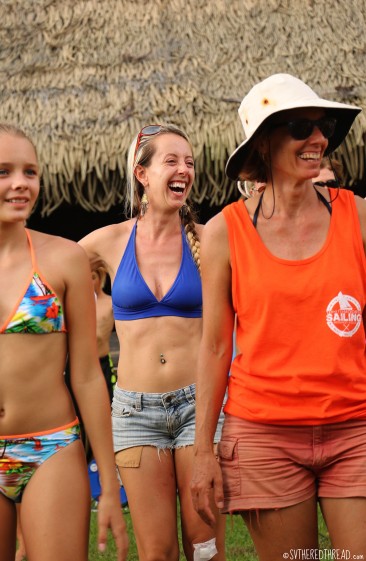 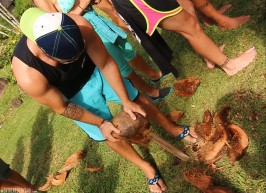 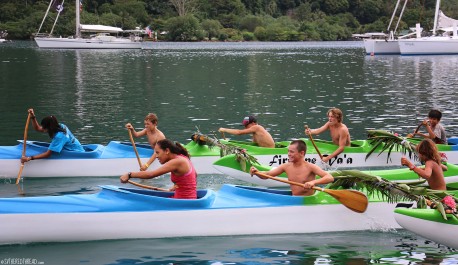 Comradery
We made friends with David Isom, the Australian Captain of s/v Eliana, who kindly handed over his boat card as I rambled anxiously hopefully about our aspirations to get jobs somewhere in Oz in just a few months’ time. We also connected again with Brian aboard s/v Prince Diamond, who had the misfortune of being bitten by a local dog amidst the festivities. Even a dog bite couldn’t damper the spirit of the event, though! It was an unforgettable celebration.

The pictures below will communicate the enthusiasm and beauty of the experience more than my words possibly could. Mauru’ uru (thank you) to everyone who coordinated this absolutely fantastic gathering! 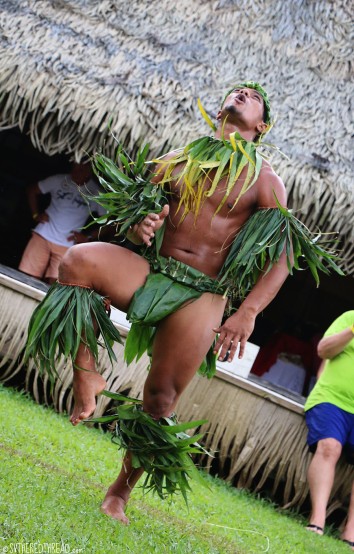 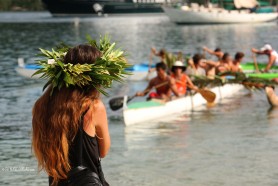 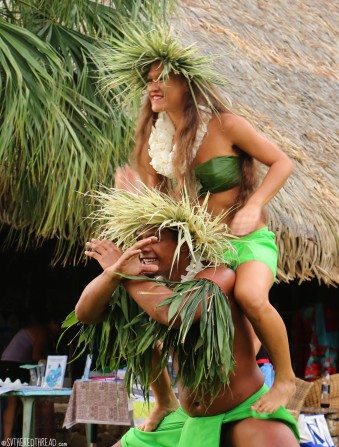 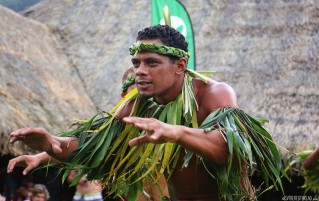 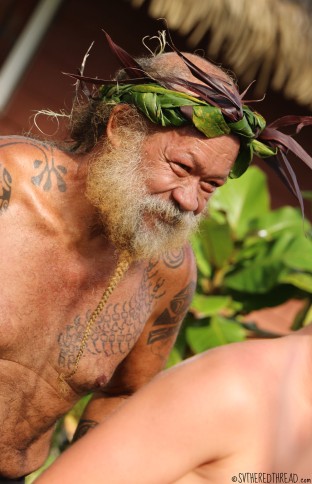 Prologue
In the months following the rally, a recap of various vessels’ experiences crossing the Pacific were published in Latitude 38. You might enjoy reading some of those short tales here. The magazine’s recap of the Tahiti-Moorea Sailing Rendezvous can be read here.

4 thoughts on “Partying with puddle jumpers”