Our sojourn in Suwarrow did not start as we expected. Tired from our passage from French Polynesia, we set our anchor, keen to get some rest but knowing the first order of business was to clear into the country. Rangers Harry and Pae, a friendly father-son duo dressed smartly in uniforms, tethered their tin dinghy to our stern and climbed aboard.

The price to clear into the Cook Islands is quite expensive. Fortunately, since Suwarrow is a national park and would be our only stop in the island country, we were given a concession and only had to pay the park entrance fee of $50USD. However, a new requirement required cruisers to send notice of their impending arrival before departing their prior port. We had submitted the required document upon departing Bora Bora, but the rangers had yet to receive it, despite our having sent it nearly two weeks prior. They levied an extra fine of $20USD each, and we kicked ourselves for having not taken a screenshot to prove we had indeed followed protocol. Much to our disappointment, they also informed us that exploring the surrounding motus was forbidden, and we weren’t allowed to scuba dive.

Scubadiving was one of the major reasons we chose to voyage five days at sea to get there! There was no explanation as to why such a benign sport would be banned. We were frustrated by the bureaucracy and news of the new restrictions, but what could we do? The beauty of the place and the sheer sense of relief of having our anchor down was enough for the moment. 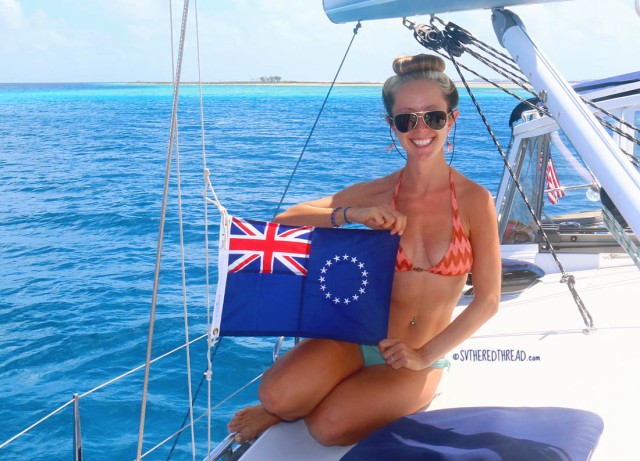 “Tom was the soul of Suvarov.”1
Suwarrow (sometimes spelled Suvarov) is an atoll in the Northern Cook Islands that was named for the ship of a Russian explorer, Mikhail Lazarev, who visited the atoll in 1814. Just shy of 11 miles (17 kilometers) at its widest point and dotted with more than a dozen motu (tiny islands), it has a rather storied history. Shipwrecks and treasure, ghosts and hermits, and birds, birds, birds. Spanish pieces of eight and Mexican silver were allegedly discovered in the 1800s, likely the remnants of a shipwreck. There is nothing like lore of buried treasure to spark the imagination!

Evidence suggests that Suwarrow was inhabited intermittently by ancient Polynesians, but a permanent settlement has never been established, owing at least in part to Suwarrow’s vulnerability to cyclones and low-lying topography. To survive a cyclone that pummeled the atoll, a visitor in the early 1900s supposedly tied himself to the largest tree on the Anchorage Island to avoid being blown away! There is nowhere to hide on an atoll that is scarcely 3 meters above sea level!

The most permanent inhabitant in the last few hundred years was a man named Tom Neale, whose twentieth-century memoir An Island to Oneself incited curiosity around the globe.

During three intervals, each longer than the last, the New Zealander spent 16 of his 75 years in seclusion on Suwarrow between 1952 and 1977. Tom fished, gardened, and lived a simple, difficult but ostensibly contented life with few recurrent visitors, including Bernard Moitessier, one of the most acclaimed sailors of the twentieth century. He hand-built a jetty that was all but destroyed by a storm soon after and constructed a small house that, with some renovations, contains a small library and continues to welcome the few dozen visiting yachties that call on the atoll each year.

“I chose to live in the Pacific islands because life there moves at the sort of pace which you feel God must have had in mind originally when He made the sun to keep us warm and provided the fruits of the earth for the taking.”
–Tom Neale

What makes Suwarrow so special?
Suwarrow was declared the Cook Islands’ very first national park in 1978 in recognition of its immense biodiversity, particularly seabirds, for whom the atoll is an important nesting site. Some 9% and 3% of the world’s lesser frigatebirds and red-trailed tropicbirds, respectively, nest in relative solitude, thanks to the atoll’s remoteness and limited human intrusion. Other seabirds nest there, too, including brown booby, masked booby, white tern, long-tailed cuckoo, bristle-thighed curlew, herons, pacific plovers, and wandering tattlers, among others.

Unfortunately, feral rats—stowaways aboard visiting ships—have been a menace, pillaging the local flora and eggs of nesting birds. In the last decade, several efforts have been made to eradicate the rats, with some success. It was due in part to those efforts that we were forbidden from exploring the motus, lest we compromise the eradication efforts or be affected by the poison being used to exterminate the rats. It was hard to blame the Cook Islands for doing their best to protect Suwarrow, which softened our frustration about the restrictions. We were only visitors in this place, after all.

Population: 2
Today, Suwarrow is home to two people but only for six months of the year. Each May, two rangers are dropped off with enough supplies to sustain them until the beginning of cyclone season in November when they are retrieved and returned home to one of the more populous ports several hundred miles away. In the 6-month interim, the rangers only human contact is that of the passing yachties, like us.

Harry had spent prior seasons caretaking at Suwarrow with his wife, but this was Pae’s first experience. Pae, a chef and musician, had an interlude in his work that enabled him to spend six months alongside his father. Neil and I both know the ache of no longer having that option; his father died just after we set sail in 2015 and mine died in 2003. I think we both felt pangs of envy and respect that Pae was able to travel into near-isolation to spend six months with his father; an unconventional decision that would allow precious time together that is not often possible between parents and children after kids are grown. 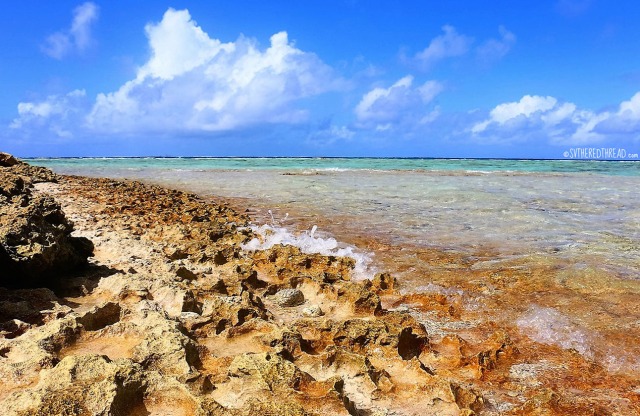 Treasures on Tom’s Island
Still bristling over the news that we would be limited to exploring only Anchorage Island, we dinghied ashore keen to stretch our sea-weary legs and have a look around. Our lap around the circumference of Suwarrow’s largest island would have taken less than an hour had we not stopped to admire the many treasures we discovered along the way. 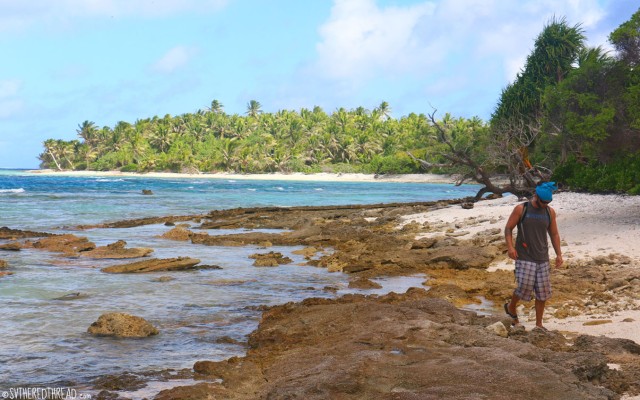 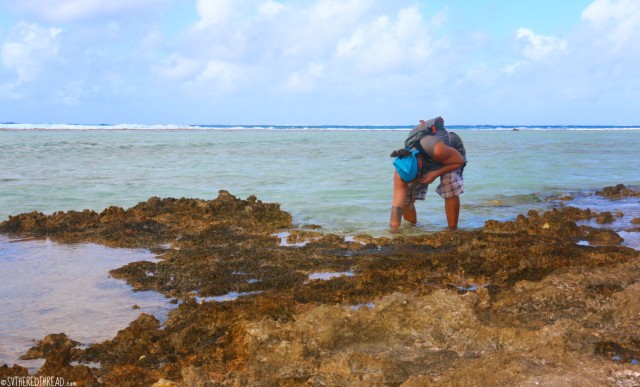 Suwarrow is teeming with sharks of many species: tigers, makos, blacktips, whitetips, gray reefs…others, undoubtedly. In lapping water so shallow it would have hardly tickled our knees, blacktip and whitetip reef sharks darted and danced. It was an oddity to see sharks in such shallow water, and we weren’t quite sure whether we should be enchanted or unnerved…or both.

Beneath clay-colored shelves of coral, ghost crabs and hid from our gaze and hermit crabs lumbered about, halting their business only when our shadows startled them or they felt the vibration of our approaching footsteps. Little orange crabs perched on the coral mesas that poked above the water, camouflaged until they leapt between the stone panes on their pointy legs. They bore a striking resemblance to Sally lightfoot crabs found only in the Galápagos.

And above us, a flock of Suwarrow’s precious birds—snowy white terns—glided on the warm tropical breeze.

Perhaps we would find charm at Suwarrow after all… 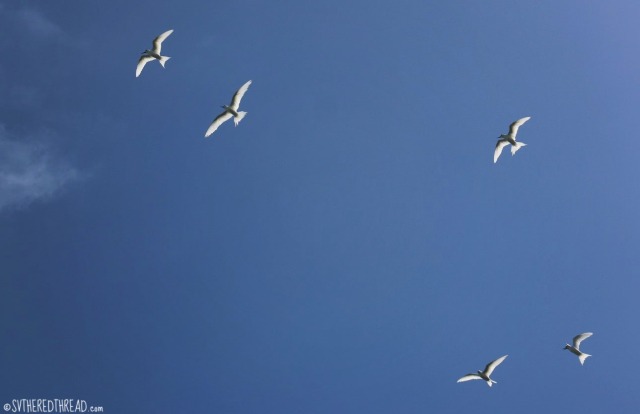 8 thoughts on “Suwarrow: An island almost to ourselves”

It is hard to believe that it has been 7 years today since we sailed away from the most beautiful city in the US. In Seattle, we planted a garden of wild, beautiful dreams...🌱
The best Daddy. Sawyer has the absolute best Daddy.
"As the animal ascended from the darkness and its shape took form, I all but panicked at its sheer grandeur. My breath tangled in my ribs and left me gasping. The calf dove to mama, and then up again, and then again down."
Ten years ago this weekend, I planted my barefeet onto the deck of a sailboat for the very first time. Less than a week after our first date over an eggs benny breakfast on Capital Hill, Neil invited me and [bravely] three girlfriends to go sailing on Lake Washington. Afloat beneath a fiery sunset at the foot of Mount Ranier, we fell in love hard and fast aboard a Catalina 22.
Yet another lockdown in Melbourne has us aching to be out of the city and back on the water...
“Wrinkles should merely indicate where the smiles have been.” –Mark Twain