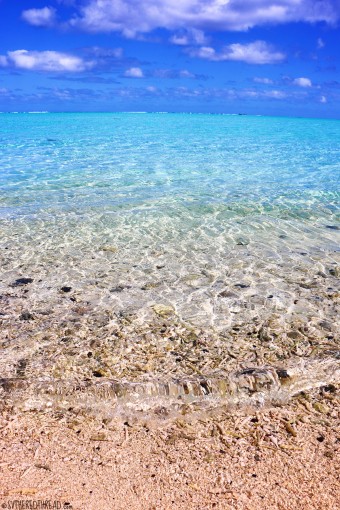 Anchor down, dinghy up, sunscreen on, off we go!

Arriving midmorning in Bora Bora after our bumpy passage from Moorea meant we had the better part of the day ahead of us. Neil and I were sleepy, but there was no time to waste. Mark and Helen only had three days remaining, and we were hellbent on making the most of every moment.

We sped south around the island and beached Miss Sassy at Plage Matira, a cove fringed with palms and not too many tourists. We spent the afternoon basking in the sun, remarking over and over again that Bora Bora’s waters really are as brilliant as travel brochures would have you believe. 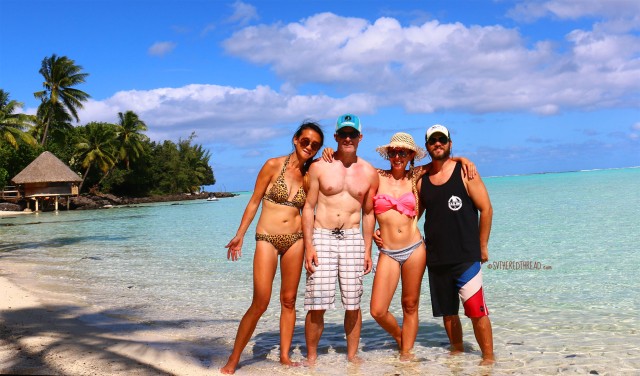 The afternoon stretched long and after we were sufficiently baked on the sand, we piled back in the dinghy and continued around the bottom of the island. We’d read about a shallow snorkel spot near Hotel Sofitel and wanted to give it a go. The winds had risen from a zephyr to solid southeasterly breeze; the ever-reliable trades. A light chop skipped across the reef-encircled lagoon, making for a bouncy ride. The bommies were easy to spot, their dark silhouettes contrasting dramatically with the aquamarine water and white sand.

Mark and Helen tugged on their snorkels and splashed over board, as Neil and I set our small anchor. So clear was the lagoon that hundreds of small tropical fish were visible, even from above the water in the dinghy! Scissor-tail sergeants and butterfly fish mingled with a menagerie of other small dark fish we could not name. The coral were lackluster, but the sea life plentiful, and the teal and violet lips of giant clams puckered as we swam near. 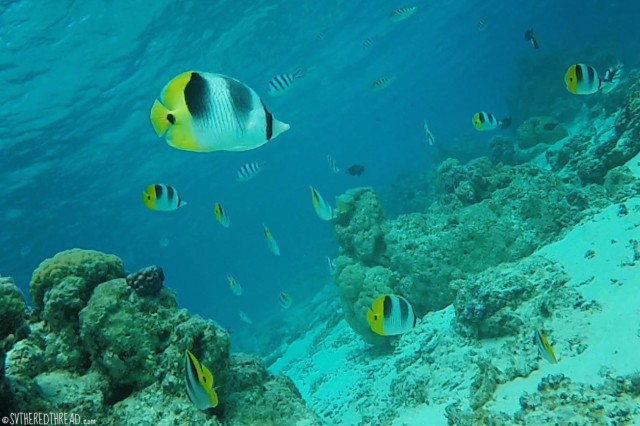 As we began to make our way back, the breeze caught the brim of my handwoven hat made on Raivavae, an early birthday gift from Neil. We decelerated and spun the Miss Sassy around. The hat itself was an easy retrieval, but the two-meter long string of tiny pink shells that sits loosely around the crown was gone. Damn! Neil dove into the water and some 10-feet down, there they were, lying delicately on the seafloor. Whew! Apparently there are some lessons I’m not particularly keen to learn…the next day I was speeding about the bay in the same hat, albeit much more mindful of how securely it was positioned on my melon!

Epicurean: A person devoted to sensual enjoyment, especially that derived from fine food and drink.

A tropical feast
Upon return to Red Thread, we took turns rushing through freshwater showers on the swimstep and tugged on fresh clothes. We’d been fortunate to secure an early reservation for dinner at the infamous Bloody Mary’s. Although its name harkens to a tomato juice-based cocktail ubiquitous at brunch cafes across the US, Bloody Mary’s is actually a gastronome’s paradise! 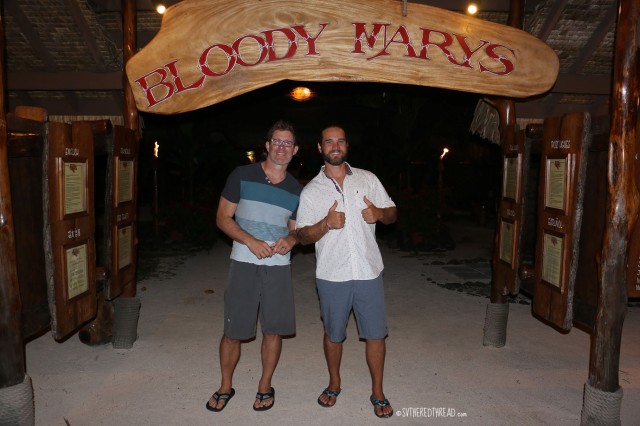 Soft candlelight danced beneath a tall thatched roof and cast shadows over a couple dozen tables surrounded by heavy benches and dark wooden stools. A pale sand floor and tropical flora completed the ambiance. Our first stop was the bar, obviously. The next stop was the essentially the butcher’s counter, where we were to select our meal from a palette of King Neptune’s finest fare: parrotfish, white albacore, blue marlin, wahoo, ahi tuna, mahi mahi, broadbill swordfish, and lobster. Of course, beef and chicken options were available, but it seemed almost criminal to turn down fresh, locally caught fish at a world class island restaurant for proteins from the barnyard! In true epicurean fashion, we chose four different fish, prepared in four different ways, to ensure we could share bites and offer our taste buds as much pleasure as possible. The only South Pacific meal that held a candle to Bloody Mary’s was the homemade feast at Chez Linda in the Australs. If you visit Bora Bora, do not miss this experience…the splurge is well worth it! 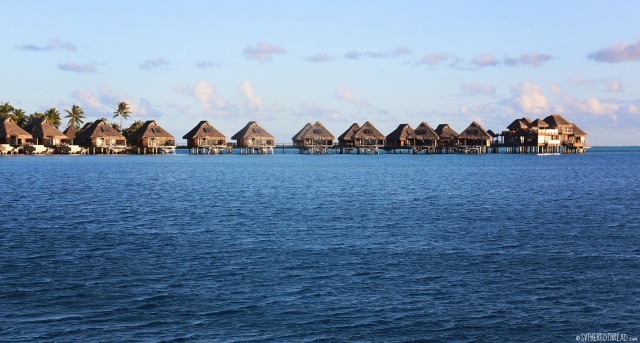 New day, new anchorage
We awoke early to relocate the boat to the western side of Motu To’opua, home to the picturesque [and very expensive Conrad Bora Bora Nui (Hilton)], a chain of over-water bungalows that hovers above the water. The anchorage is a peaceful spot snug between motu and the reef.

Anchorage waypoint off Motu To’opua: To be added.

We snorkeled the southern side of the motu then “attempted’ to saddle up at the Hilton’s fancy bar. Perhaps we looked a bit ramshackle, as our request to spend money at the bar was declined. C’est la vie! We settled for a spot down the beach on the sand”bar” (about 50 meters past the hotel dumpsters), where we could relax over a warm Hinano, and I could admire Helen’s watercoloring skills.

Swimming with gentle giants
July 2nd was Mark and Helen’s final day, and we hoped we might have the good fortune of sneaking in one last thrill. Cruising guides suggested that sometimes manta rays could be observed feeding at nearby bommies in early morning. The day was quiet and the water was still, as the sun crept above the horizon and eight eyeballs scanned the water hopefully. When we spied mammoth shadows gliding beneath Miss Sassy, there wasn’t a single other boat in sight—not a tourist boat, nor dinghy. Manta rays are elegant gentle giants that are said to be the spirit protectors of humans. I’d become so fascinated with them that I’d even had one tattooed on my arm, ironically enough, before I’d even seen one up close! We slipped into the water, hearts racing, already mesmerized by the creatures beneath us. 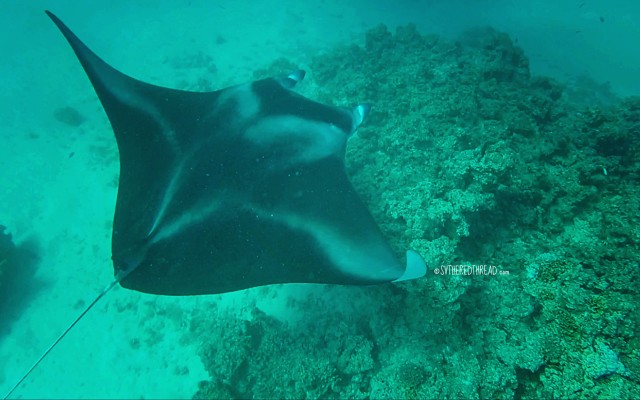 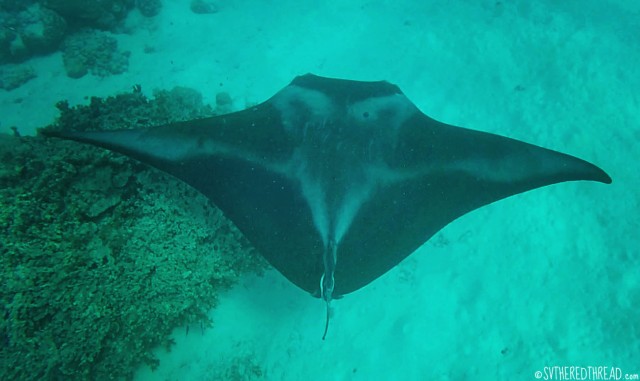 There are two species of mantas, reef manta rays and their larger cousin, the oceanic manta ray. Based on their size and diffuse coloring on their wings, we believe we saw the former, though Bora Bora is one of the few places in the world where both reside. With wings spanning upwards of five meters (these were two to three), reef mantas are a sight to behold. I can hardly fathom what swimming with their 5.5- to 9-meter cousins would be like!! Mantas soar effortlessly through the water, agile and nonchalant, living their 40 to 50 years in relative peace with few natural predators. Mantas have dark elegant wings brushed with abstract white patterns, predominantly white bellies with unique arrays of dark spots. What appear to be silvery horns are actually cephalic fins that unfurl during foraging to direct water into their mouths, where they filter the water through their gills to extract plankton and fish larvae, similar to baleen whales. At one point, the four of us circled around, holding hands with our snorkels pointed toward the sky and our collective gaze to the creatures pirouetting below. It was a beautiful moment.

…and then the tour boats arrived and deposited their day’s catch into our peaceful paradise. That was our cue to depart. We’d had our time, and it was only fair that we clear out for others to experience the magic.

We spent our final afternoon on Motu Tapu. Sometimes private vessels host tourist parties on the motu, but not today. The tiny island was all ours! We beachcombed. Sipped warm beer. Paddleboarded. Explored the shoreline. Waded into the water. A very hard day indeed. We soaked up as much bliss as we possibly could, knowing that our time with friends was winding to close. 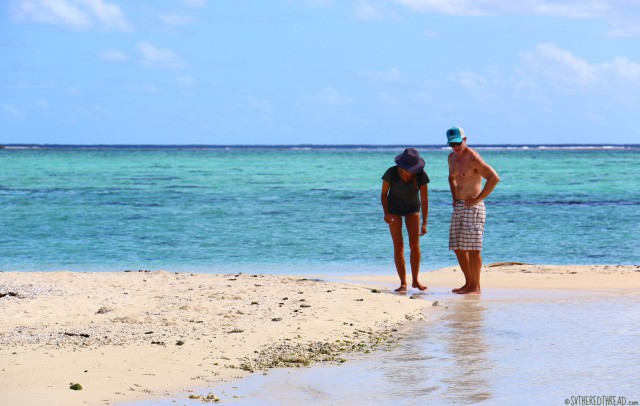 So, is Bora Bora really all it’s cracked up to be?
Yes, a resounding YES.

Time to say g’bye
No matter the leisure, we all knew the inevitable was coming. Mark and Helen had a flight to catch. Mid-afternoon, we made our way reluctantly back to Red Thread, weighed anchor, and motored toward the airport on Motu Mute at the north end of the reef. We could have taken our friends to Vaitape, the main town, and put them aboard a speedboat, but we opted to steal every last moment with them and instead motored as close to the airport as we dared, dropped anchor, and piled into the dinghy.

Mark and Helen’s luggage was much lighter than when they arrived, as they’d brought with them an entire checked bag of boat parts! Whizzing up to the airport drop-off in Miss Sassy was an amusing end to a most memorable visit. Tears were shed, as usual, as we wondered when we would be reunited again…

The coolness of dusk and the rush of wind over my face dried my tears as we sped back toward Red Thread. We weighed anchor and our now crew of two made haste in the dimming light to find a more comfortable place to spend the night.­­

Anchorages and snorkel spots we visited around Bora Bora are indicated by symbols accordingly, including the manta ray symbol. Red dots indicate where we were able to navigate Red Thread; gray dots indicate where we took our dinghy either due to shallow water or because it was a short jaunt and more convenient.

6 thoughts on “Is Bora Bora really all it’s cracked up to be?”

Sailing Solo in Search of an Endless Sunrise