We awoke in a state of near-giddiness on the 5th of May. In less than 24 hours, Mark and Helen, two of our dearest friends would have their flip flop-clad feet on Costa Rican soil. We weighed anchor, and began the final push to our rendezvous point in Puntarenas, a gritty commercial port in the Golfo de Nicoya. We anticipated that we’d motor a good chunk of the 20-nautical-mile stretch, and we did just that. Thankfully, as we cruised north, a shift in the breeze enabled us to hoist our sails and poke along at an unhurried pace the final hours.

Heavy rains a couple nights earlier had littered the waters of the Golfo with biological and manmade litter. We avoided large floating branches, passed seabirds being ferried on a hunk of buoyant wood, and scowled at a plastic lawn chair. We hadn’t been so alert to dead heads (i.e., partially submerged trees whose true mass is often obscured beneath the water’s surface) since departing the Puget Sound, where evergreen forests inhabit the shorelines and sacrifice their dead to the sea.

Puntarenas is situated on a narrow, several-mile long peninsula that juts westward from mainland Costa Rica. Strong currents and shifting depths characterize the inner waters. Anchoring within the channel is not advised, so we hailed the Costa Rica Yacht Club to request a berth on one of their floating docks. A pilot in a bright yellow panga raced out to meet us. We furled our sails and motored swiftly with the flooding tide passed decrepit fishing trawlers who begged for tender-loving care and half-sunk sailboats who had been truly forsaken. 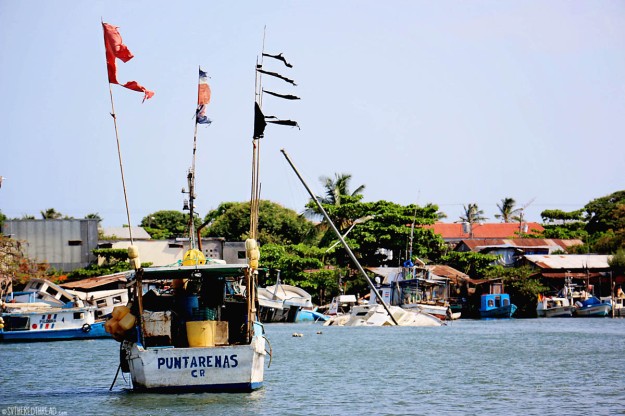 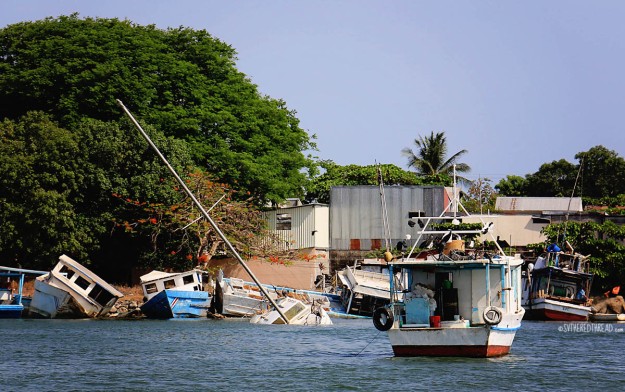 After several unsuccessful attempts to tie up to the floating dock in the swift, swirling current, we secured The Red Thread at last, thanks to the help of two Yacht Club employees. We weren’t quite sure how much we could trust our big boat to be tethered to the small dock in strong current, but she stayed put and for only $25 for the night, we couldn’t complain. Because crocodiles inhabit the waters, the Yacht Club offers a free taxi service to bring cruisers ashore. We know our stay in Puntarenas would be a quick one, and we were happy to leave Miss Sassy tied down on the bow. We presented our zarpe nacional, passports, and USCG documentation to the Yacht Club and flung ourselves into the pool. Fresh water dips are exciting when so much time is spent in saltwater! We awoke the next morning and scrubbed the boat in preparation for our friends’ arrival.

Mark and Helen had taken a redeye flight from Seattle to San Jose, and they hopped a shuttle bound for the coast immediately. At 9 am, their van rolled into Puntarenas, and thanks to our DeLorme inReach, we were able to notify them of our whereabouts. We hadn’t seen them since we’d returned to Seattle after Neil’s dad died and after seven months apart, tears fell and hugs were long and tight.

We unloaded their two tiny pieces of luggage and a larger bag filled to the brim with boat parts they had schlepped from the US. The latter made the morning feel like and Christmas. New oars and joker valves and racor fuel filter parts and an engine starter motor, oh my! Soon after, we caught a bus into bustling Puntarenas to provision. Late in the afternoon, we pulled away from the little dock, excited to share with them our cruising life. The combination of an acute surge in heat relative to the Pacific Northwest and jetlag struck our friends, and they passed out in the cockpit as we motored toward the first of several island stops we’d enjoy during their nine-day trip.

A creepy little island
Isla San Lucas anchorage waypoint: 09°56’.89 N 084°54’.32 W
Some 90 minutes later, we set our anchor in the dusk light in a protected cove at Isla San Lucas. The anchorage was calm and peaceful; hardly a wake could be heard lapping at our hull. Together we enjoyed our first of many fine meals aboard. We grilled hearty barbeque chicken and corn on the cob, a dinner more akin to one you might enjoy in the deep in the southern states of the US, rather than Latin America!

When morning came, we all rose early. The heat dissuades even the deepest of sleepers to slumber too late. We brewed a pot of coffee, cooked up our infamous “boat breakfast”, and set out to explore! 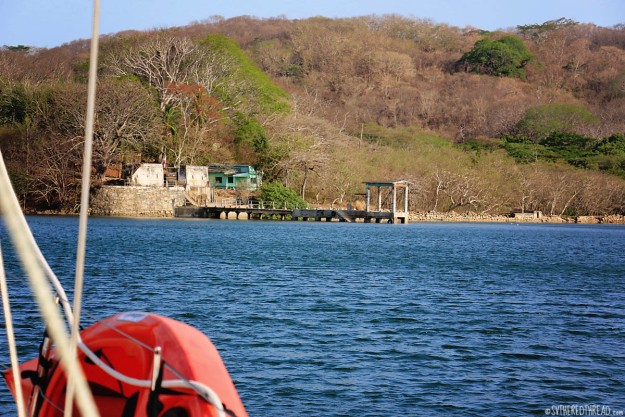 Isla San Lucas is home to a decaying prison that was established by dictator Tomás Miguel Guardia Gutiérrez in the mid-1800s. Costa Rica’s most heinous criminals were imprisoned there between the late 1800s and early 1990s, and reports of torture were notorious. From the anchorage, the structure looked almost charming. A Costa Rican flag welcomed us, and we found a few men working on miscellaneous projects. They attempted to charge us $10USD per person to explore the otherwise deserted island, but we declined. We hadn’t brought any cash ashore, and the legitimacy of the alleged fee was questionable at best. The men accepted our refusal. Nonetheless, we opted not to venture into the bowels of the prison, especially after noticing a few sinister-looking relics strewn about the path leading to the main building. The most disturbing was a disfigured, naked doll dangling from a noose in an old telephone booth [cue horror movie sounds…]. 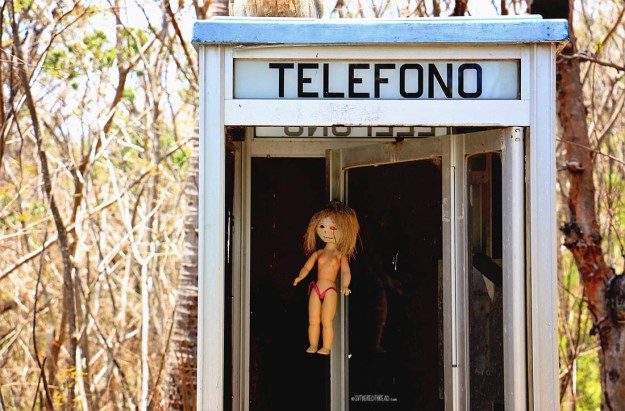 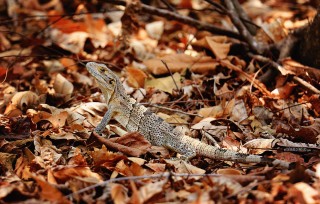 We walked a couple miles, stretching our legs on the trails. I was tormented by biting bugs, and we saw a few proud-looking lizards. The broiling heat and humidity made our skin drip, yet the flora of the island was remarkably arid. We reached the eastern shore of the island and discovered a rocky beach, where a troop of howler monkeys swung from the trees. They were not particularly amused by our presence, and the dominant male was very vocal and demanded we leave. When they started “pooing” towards our general vicinity (i.e., above our heads), we relented and hiked out. Well played monkeys, well played. 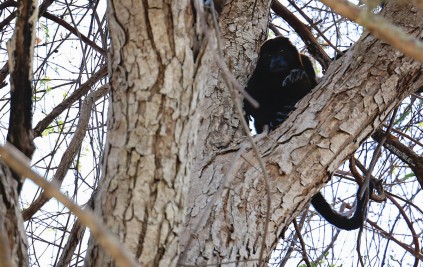 Little Jesus + the Cedars
Jesusita y los Cedros anchorage waypoint: 09°50’.44 N 084°53’.10 W
That afternoon, we motored into a southerly breeze toward Jesusita y los Cedros, a pair of even smaller islands, less than nine nautical miles away. Along the way, a series of tiny islets guarded by tall, lanky cacti made for interesting afternoon treat for our eyes. In contrast to nearby Isla San Lucas and the islets, the vegetation on Jesusita y los Cedros was more verdant and a few palm trees dotted the shoreline. By the way, if someone out there is in the market for a band name, we’re sure the islands names, which translate to Little Jesus + the Cedars, would be a mega hit!

We set our hook deep in the cove between the two islands. All the swing room we could want was ours. We were, once again, the only vessel in sight. The next morning, we launched Miss Sassy and took a dinghy tour around the islands, beers in hand. Vultures pecked at a cadaver, and we spied a small floating boathouse, where several boats were tethered, even a sailboat. There was a person swaying in a hammock, however, we didn’t notice him until we looked back at our photos. We toured near a second floating house we’d noticed on our way into the anchorage. In front of it were numerous large, blue floats. On the house was a sign that read “Granja Marina” or marine farm. We weren’t sure what to make of the place, and there was no one to whom we could direct questions. Perhaps they were raising fish or even lobsters? 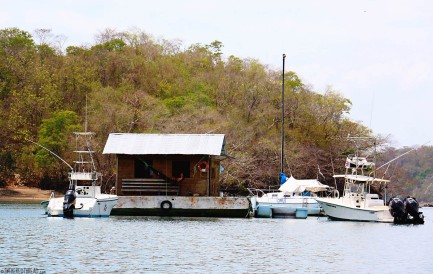 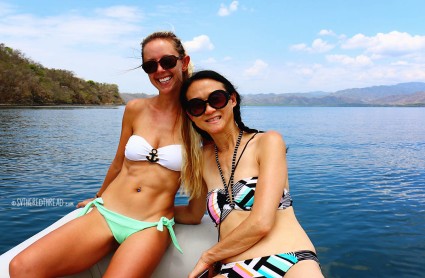 Our stay at Islas Jesusita y los Cedros was brief but pleasant. Although more verdant than the creepy prison island, its waters, too, were dark, and we couldn’t be lured to swim. We had been told by Erlin on s/v Ventured, whom we’d met in Bahia Panama in February, that the Tortugas would satiate our craving for water play. We got underway once again…ISLA TORTUGAS, here we come!

11 thoughts on “A few days in the Golfo de Nicoya, CR”

Sailing Solo in Search of an Endless Sunrise