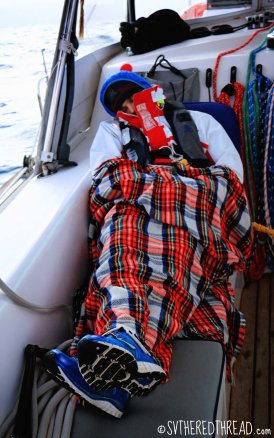 After two days in Avalon, we began planning our next passage. We enjoyed our time in Avalon so much we had considered staying longer. Unfortunately, I had developed a mysterious rash all over my body, except for my face, and I was pretty distressed by the physical experience of the rash and its dreadful appearance. We speculated that it may have been related to the Pacific bonito we caught, a hypothesis that was later ruled out. After consulting with our friend, a sailing dermatologist in Seattle, we decided to head toward San Diego. The rash was growing progressively worse, and he encouraged us to go to seek medical attention to be certain no complications were developing.

Thunderstorms at sea
From Avalon, we began the trek to San Diego at 5 pm on the evening of November 20th. At around 2 am, the seas built and the winds became erratic as a thunderstorm passed over us. We hove-to, reefed our mainsail, and Neil hailed the US Coast Guard on our VHF radio to inquire about weather, as we had not noticed thunderstorms forecast during our weather and route planning. We were noticing flashes of light that were concerning for lightning, a boater’s nemesis. Several minutes later, we were hailed by a US Customs aircraft who suggested that the flashes of light we had seen may have been from their aircraft’s strobe. They offered a flyover to confirm and reassured us that they had seen no lightning in the area. WOW, there we were sailing through a storm on the ocean, while speaking to an airplane via a radio! The bashing seas and gusty, fitful winds were taxing our autopilot system. Neil hand-steered until conditions became more consistent. Fairly rough seas continued through the early morning, but so did solid wind. We sailed right up until we reached the entrance to the long channel into San Diego Bay.

Groceries and the doctors
We dropped our sails and through large rolling swells, we motored the remaining distance to La Playa Cove a pond-like anchorage in the town of Point Loma. We dropped our hook at 8:15 am. We hadn’t done any provisioning in 10 days, so after a couple hours rest, we inflated Miss Sassy Strings (aka our dinghy) and made a run for groceries. To cap off an exhausting 24 hours, we then caught a taxi to the emergency department, as an appointment at a community clinic wouldn’t be an option during the weekend. An undetermined virus was ultimately concluded to be the likely cause of my rash. I felt a wave of relief that the issue was not more complicated; at the same time, I was still spotted, itchy, and sleep-deprived. Not to mention, that we are uninsured and were now anticipating an emergency department bill. Back to the boat we went…

The following day, my college girlfriend, Niki, drove down from North Hollywood for a day of relaxation, margaritas, and astrology readings. She also delivered the dozen packages we’d shipped to her as we’d sailed down the coast…wahoo! It was like Christmas coming early! Among the most exciting were fish and seabirds identification books, oarlocks, and a silicone basting brush (thanks, Mom). That day, her visit was more therapeutic than the prednisone I had been prescribed! She was just what the doctor ordered for my spotted, discouraged self! Niki is one of the kindest and most eccentric people I know, qualities which made me adore her immediately when we met during college over 12 years ago. We gabbed on the bow, and Neil swung in the sky chair, much to the amusement of passing boats whose hoops, hollers, and beer handoffs made for damn good entertainment.

That Sunday, we caught the Seahawks game at The Harbortown Pub, a fantastic local sports bar. Our spirits were high after we whooped the Arizona Cardinals and after the game, we met up with Tristan and Monique, another one of my college buddies and his fiancé. They generously treated us to delicious Thai food and invited us to spend the Thanksgiving holiday at his mom’s house the following week. 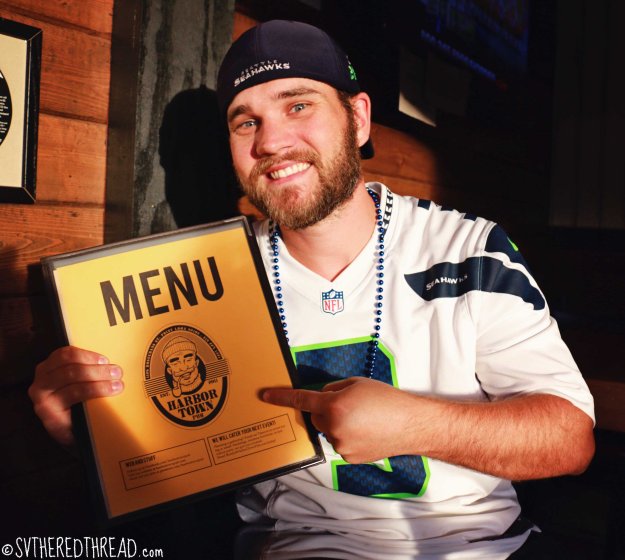 Anchorage hoppin’
La Playa Cove is a weekend anchorage only, so come Monday morning, we pulled the hook and motored deeper into San Diego Bay. The strong military presence in the city is undeniable as we passed multiple aircraft carriers and helicopters flew overhead. We cruised under the Coronado Bridge and into the posh neighborhood of Coronado. We dropped the hook next to the golf course in Glorietta Bay, with a view of the Hotel del Coronado. There, we met Nate, Natalie, and their little boy, Sully, a family heading to Mexico whose blog we’ve been following for some time. We enjoyed sundowners aboard their boat, s/v Astraea and chatted about many things related to cruising preparations. We also connected with Karina and Gary on s/v Sea Rover II, a boat out of Vancouver, BC, and completed some boat projects. After three nights in that area, we headed back to La Playa Cove to capitalize on an extra day in the anchorage offered because of the Thanksgiving holiday.

Gobble till ya wobble
It was unseasonably hot in San Diego on Thanksgiving Day. After baking a blackberry peach pie and funeral potatoes, a Utah delight, the boat was sweltering. We dinghied our baked good and a bottle of wine to shore, where Tristan picked us up in a sporty little convertible, the perfect vehicle for a toasty SoCal day. He took us to visit Ocean Beach and Del Mar and then it was off to Ramona where we enjoyed an incredible meal prepared by his mom. We both missed our parents and siblings that day, but we were sincerely thankful for the opportunity to share the holiday with someone else’s family. Of course, it goes without saying that we were thankful to watch the Seahawks absolutely spank the 49ers in the Thanksgiving Day primetime football game.

Adios America
After a last-minute sail repair, it was time to finally say goodbye to a lovely city and to our home country. We had spent 14 days in San Diego and, with the exception one, we had slept all of our nights at anchor. During our time in San Diego, we spent time with old friends and made some new ones. In addition to meeting sailboats Astraea and Sea Rover II, we finally reconnected with our friends on s/v Namaste. We also met three other southbound sailboats: Tom and Annie on s/v Tappan Zee (USA); and Tanya, Scott, and Josh on s/v Kialoa (Canada). We loved San Diego for the unique character in the different neighborhoods we visited and for the expansive marine communities that dotted the bay. During our only night in a marina a lost dog jumped aboard and attempted to adopt us. Needless to say, San Diego charmed us and will rank high on our list of possibilities for where we will consider living when we return to the US in a few years. 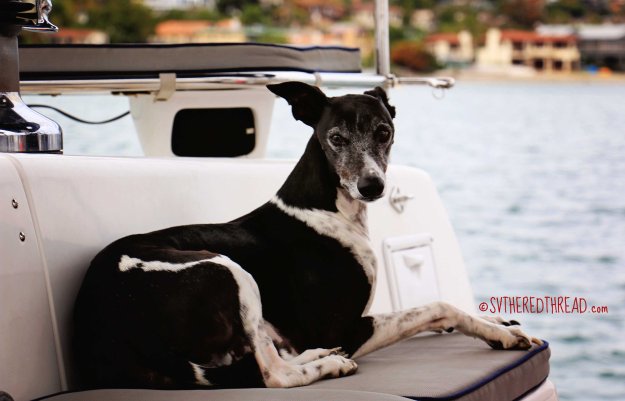 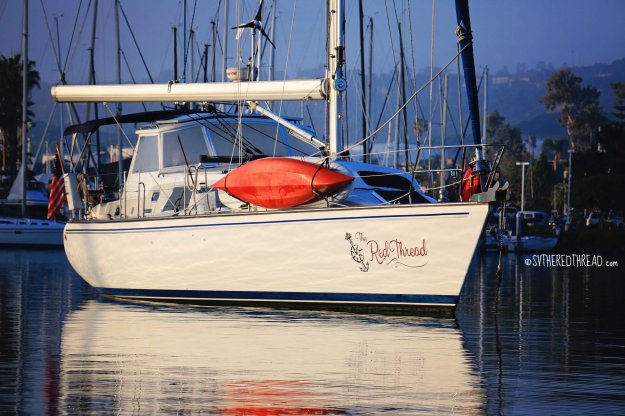 Passage perks
Point of departure: Avalon, Santa Catalina Island, CA – 11/20/14
Point of arrival: San Diego, CA – 11/21/14
Distance traveled: 85 nautical miles
Total time: 15.25 hours
Engine roaring: 4 hours
Sails soaring: 11.25 hours
Average speed: 5.6 knots
Max speed: 7.2 knots
Jessie’s musings: The main thing that stands out to me was the anxiety I felt related to mysterious rash I had developed. I was extremely uncomfortable in my own skin and was stressed that the reason for the reaction was unclear. Moreover, the cost of healthcare in America is outrageous, and I felt worried about the costs that we would incur by going to the doctor as newly uninsured citizens. Beyond that calamity, I recall being thrilled that the winds were cooperating such that we could sail, sail sail! Even when winds and seas grow large and nerves are unsettled, I trust that The Red Thread can handle it all, which helps free up my mind to enjoy the adventure of it all.
Neil’s reflections: If it isn’t the Santa Ana winds, it’s a crazy thunderstorm! Though we sailed for nearly all of this trip, with a double-reefed main and jib, the thunderstorms were at times powerful and a little frightening. We got some help from a US Customs airplane that hailed us and offered to circle a four-mile radius over us to make sure we were clear of lightning. Coming into San Diego Channel is no joke in heavy rolling seas with crab pots everywhere, but seeing that city skyline felt like a real accomplishment. We’ve now sailed the entire west coast of the contiguous United States.

To cap off our voyage down the coast of the United States, here is some footage of our travels!