Just an hour ferry ride from the glitzy streets of Hollywood, Catalina Island is a favorite vacation spot for the glamorous and not-so-glamorous (ahem, grubby cruisers like us) alike. The island has an interesting history and a sexy reputation. For three decades, the Chicago Cubs traveled to Catalina for spring training, and Norma Jean called the island home before she became the famous sultry starlet, Marilyn Monroe. Santa Catalina Island was a place for the famous to be seen! There are two main towns on Santa Catalina, Avalon and the lesser visited, but second busiest, Two Harbors. 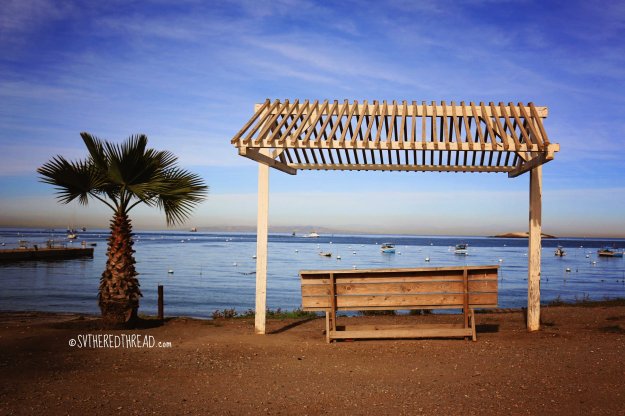 Two Harbors
Aptly named, the little town of Two Harbors straddles a quarter-mile strip of land between Isthmus Cove and Catalina Harbor (or “Cat” as the locals say) on the western portion of the Island. Our nighttime arrival to Cat Harbor had come at the end of a long, unexpectedly challenging day. We awoke surrounded by desert cliffs, with palm trees and scrub brush sharing real estate on the hills. Together, Isthmus Cove and Cat Harbor provide moorings for nearly 400 boats, but on a quiet day in the offseason, there were few boats scattered amid the many floating balls. The harbor was calm and brown pelicans soared and dove masterfully into the water.

The pebble beaches along Isthmus Cove were beautiful, and I could’ve spent hours sitting on the shore studying tiny, colorful shell remnants. The town was sleepy but charming, and we spent the afternoon poking around in the scuba shop and the general store (the only shops in town), and walking some of the paths along the water’s edge. We arrived back at The Red Thread with just enough time before sunset to untangle her anchor chain from a cluster of lobster pots that had unfortunately wound around it, to weigh our hook, and to reset (for the third time in less than 24 hours).

Fish frenzy
The next morning, we set our sights on Avalon. We departed soon after daybreak, eager to catch the little bit of wind that was forecast for the day. We hoisted the sails and got two hooks in the water as soon as we left the harbor. Within less than 10 minutes of dropping the lines, we were pulling them BOTH back aboard! Neil glanced back at the very moment a fish hit the lure on our starboard side! We pulled the handline aboard amidst cheers for our second catch of the voyage! Almost immediately, we pulled in catch number three! Having been raised in a farm-to-table family, I still believe that there are few things that can make you feel like master of the universe in the way that capturing your own dinner can. We are subsistence fishermen only, so our fishing ended that day almost as quickly as it had begun. Our fish identification skills are sorely lacking, so we were thankful to get cellular service long enough to the google photos of local fish. We’d snagged a duo of 14-inch pacific bonito*! The pair would make for a tasty dinner, maybe even two!

*After this posting, we discovered that we had caught a striped bonito (aka Mexican bonito), not a Pacific bonito. Live and learn! 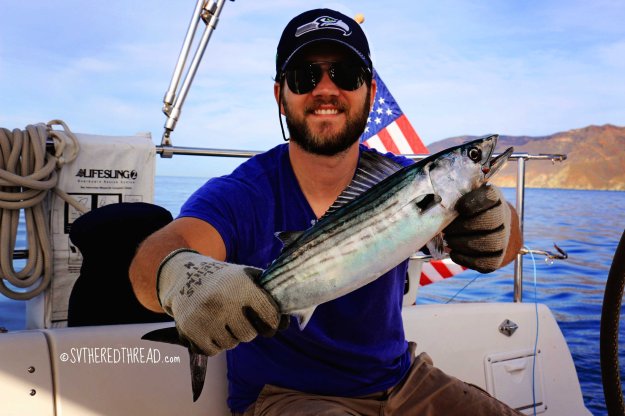 We spent the next couple of hours practicing heaving-to, reefing, and other safety maneuvers in steady breeze, before the winds subsided, we decided to motor. Then, we decided to do a little sails-ercise (i.e., boat exercise) to pass the time. Out came the resistance bands and yoga poses. We looked ridiculous, I’m sure, but we weren’t bored! Before we knew it, the Avalon panorama came into view…

Meeting our mooring
The mooring ball fields that allow hundreds of boats to visit Santa Catalina Island during the peak of summer wait lonely during the offseason, bobbing about with nowhere to go. It’s a brilliant system, really, but foreign for we mariners from the Pacific Northwest. Each mooring is numbered, so that boats can be easily directed to the mooring they’ve been assigned. The system consists of a floating mooring ball, a pick-up pole, and two heavy-duty weights. The pick-up pole is lifted from the water so that the rope that extends between the weights can be retrieved. A loop at either end is attached to the bow and stern cleats of the vessel. This enables boats to tether their vessels securely while they enjoy an island that would otherwise be difficult to visit, given the limited anchorage options and vulnerability to unpleasant weather. Additionally, in the peak season it allows this small harbor to be packed with boats like a can of sardines. We caught our mooring on our first try but had a hell of a time getting the loops over our cleats. We must’ve looked like a couple of greenhorns because harbor patrol buzzed over to inform us that left in the current state, the lead weight would likely begin to chafe against our hull. Not to mention that if there was even a smidgeon of wind, there would likely be too much pressure to free the lines from our cleats without giving ourselves a hernia, both factors associated with the size of our boat and height of our freeboard in relation to the length of line between the mooring weights. We modified our mooring by threading dock lines through the loops to alleviate some of the pressure and to give us the option of simply releasing our lines in the event we needed to make a quick escape. 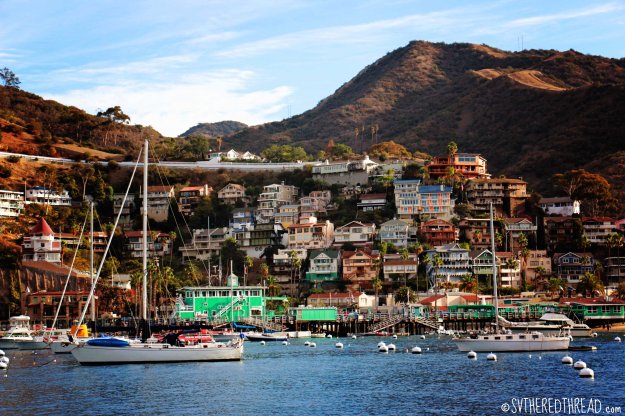 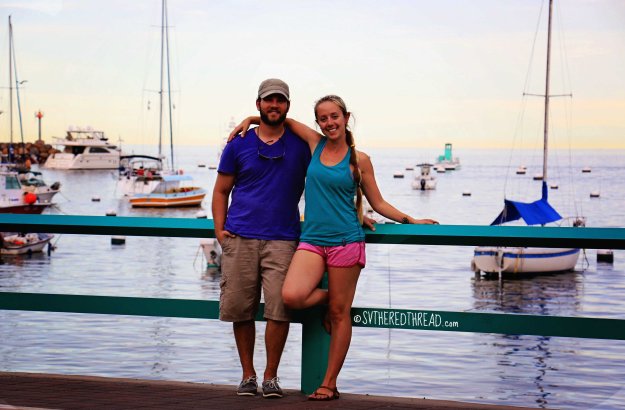 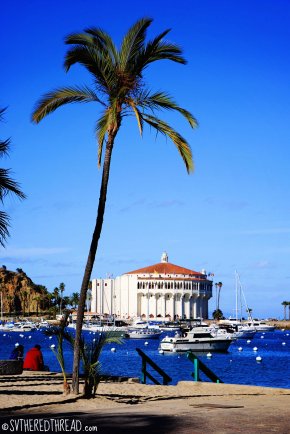 Avalon town
Avalon is sight to see from the water! Colorful homes are stacked as if on shelves along the hillsides, and a well-groomed waterfront lines the rim of the harbor. The panorama reminded Neil and I of scenes from northern Italy, where we’d both backpacked during our early 20s, long before we ever met each other. We imagined Avalon would be chaotic in the peak of summer or when cruise ships unloaded hundreds of daytime visitors, but we experienced neither and found the town to be stunning and peaceful. The Casino is a regal building that stands iconic on the west end of the harbor. We were excited to learn there was a Casino in town, especially Neil who was giddy about the possibility to throwing down a (very) few dollars at the craps table. Alas, it was not to be. It turns out the casino is theater and museum. I repeat, the casino is not a casino! I wonder how many visitors have traveled to Avalon excited to gamble, only to realize their error upon arrival. That misleading little detail aside, we loved exploring Avalon!

Passage perks
Point of departure: Catalina Harbor, Santa Catalina Island, CA – 11/18/14
Point of arrival: Avalon, Santa Catalina Island, CA – 11/18/14
Distance traveled: 25 nautical miles
Total time: 5.5 hours
Engine roaring: 4 hours
Sails soaring: 1.5 hours
Average speed: 4.5 knots
Max speed: 6.8 knots
Jessie’s musings: The pacific bonito we caught were beautiful creatures! Elegant black stripes line a blue, silvery belly and attractive dorsal fins run prominently along their spine. Pacific bonitos are among the strongest fighting fish relative to their size, and ours proved themselves strong and agile as we pulled them aboard The Red Thread. That night, baked with butter and lemon, I liked them all the more! A delicious meal prepared by Chef Neil.
Neil’s reflections: Though Cat Harbor is very quiet, it is a charming little respite – and well protected from Santa Anna winds! Avalon was truly spectacular with pastel colored buildings, crystal clear water brimming with bright orange Garibaldi fish, and beautiful hills surrounding the harbor. Though we didn’t get to sail much of the day passage from Cat Harbor to Avalon, it was extremely pleasant, and a dinner of fresh baked Bonito was incredible.

5 thoughts on “From remote to ritzy: Two Harbors and Avalon, Santa Catalina Island”

© s/v The Red Thread, 2019. Unauthorized use and/or duplication of any blog entries or photos without express and written permission from this blog’s owners is strictly prohibited. Excerpts and links may be used, provided that full credit is given to svtheredthread.com, with appropriate direction to the original content. Thank you!

sailing solo in search of an endless sunrise

Sail with the Flo

The adventures of a British couple, sailing around the world

I must go down to the sea again ...
Any Travelling Heart