We were reeling from a few hectic days of preparation, as we set off from Seattle for an extended weekend, a getaway for which plans had materialized quickly and unexpectedly. Thankful for long summer days, we departed Elliott Bay Marina at 6 pm, bound for the heralded cruising grounds of the San Juan Islands. Weather permitting, we agreed that this would be our first true overnight passage, yet another exercise to ready us for our upcoming departure. 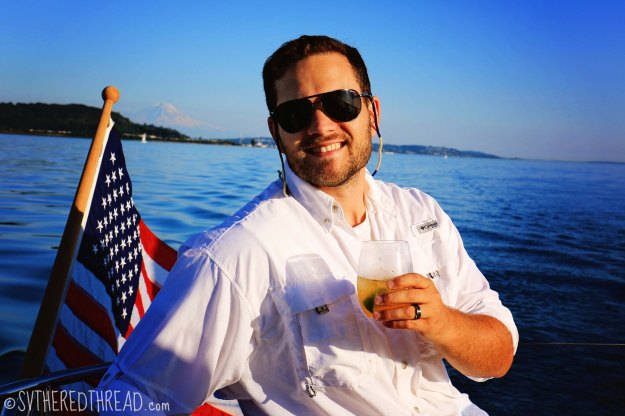 After dinner and a lovely sunset in Admiralty Inlet, Neil took the first watch as we motored against a flooding tide and a light northerly wind on our nose. I tucked in down below to sleep for an hour or two on the main salon starboard cushions. An evening gale warning was in effect for the Strait of Juan de Fuca, with winds expected to be 25-35 knots (i.e., 29-40 mph). As projected, winds subsided around midnight, and we chose to press forward, rather than spending the night in Port Townsend. Renowned for heavy blankets of fog and sometimes harrowing conditions, the Strait stretches over 100 miles from the Pacific Ocean to the interior waters of the Puget Sound. I was on watch when we reached the Strait just after midnight. The night sky was a beautiful and dizzying mosaic of stars. 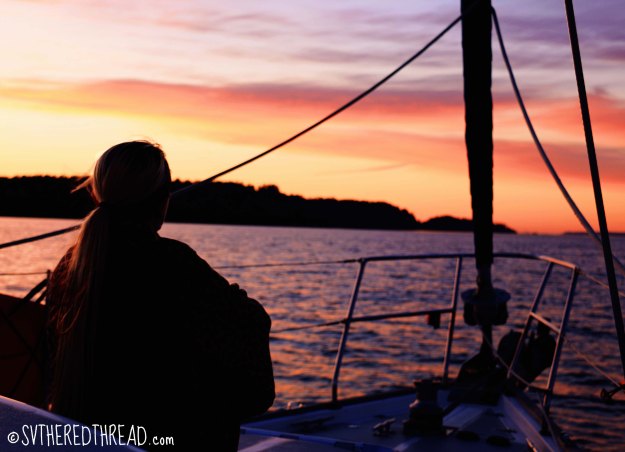 Like clockwork, the northerly breeze that had funneled down Admiralty Inlet during the first several hours of our passage shifted to a westerly and piped up. I woke Neil, and we readied the sails. Conservative, we chose to sail under a reefed jib alone, as winds rapidly climbed to 28 knots. As the winds increased, so too did the feeling of wooziness in the pit of my stomach. Unlike some newbie cruisers who have no problem keeping their cookies down (ahem, Ellen), from 1:30 to 3:30 am, I went three miserable rounds paying homage (i.e., puking my guts out) to King Neptune over the side of the boat, a personal record. Apparently, the ole bear demands more than just rum.

Neil’s intuition as a sailor and seemingly innate ability to understand The Red Thread are traits rivaled only by his iron belly. Neil’s queasiest moments were those in which he had to suffer through the sound of my retching overboard. I was thankful that he was alert and pumping with adrenaline, such that I could try to sleep off some of my sickness after the wind eased to a consistent 16 to 20 knots. Laying below, I was transported to 2011, when I traveled alone for a month in India and spent a number of nights aboard a crowded train. The clamoring rhythm of sails, pulleys, and sheets (i.e., ropes) echoes through the hull of a sailboat underway, bearing a striking resemblance to the sound of a heavy train on steel tracks. 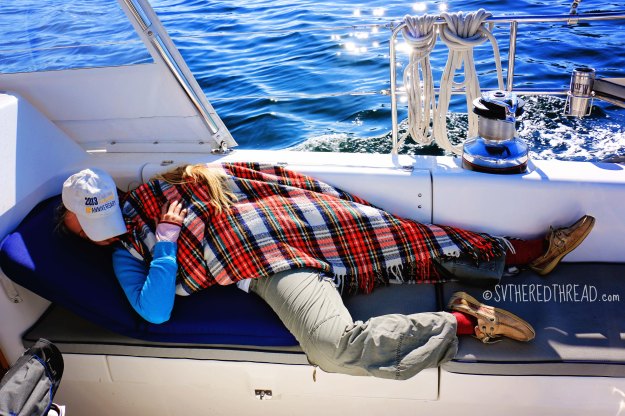 I joined Neil again in the cockpit just before 5 am, as color began to flood the sky of a new day. We had watched the moon rise at dusk and saw it depart from view long before dawn arrived. The wind had subsided to the low teens, and he had hoisted the main sail while I was below. As sick as I had been and as exhausted as we both felt by the time we reached the southern tip of San Juan Island, we were also rather triumphant. We had done it – together, we had completed our first of many night passages. Eventually, the wind fizzled entirely, and we fired up the engine to travel the few remaining miles to Roche Harbor. We set our anchor firmly in the muddy seafloor, launched our outboard, and Miss Sassy Strings took us into town.

Passage perks
Port of departure: Elliott Bay Marina, Seattle, WA – 08/05/14
Port of arrival: Roche Harbor, WA on San Juan Island – 08/06/14
Distance traveled: 72 nautical miles
Total time: 16 hours
Engine roaring: 8 hours
Sails soaring: 8 hours
Neil’s reflections: The starry sky was ablaze with light, with streaks of shooting stars sporadic and wonderfully unexpected. The westerly swell, reaching 5 feet at times, crashed around us with bright neon green phosphorescence. While alone on watch I had a joyful moment listening to my favorite stand-up comedy station on Pandora laughing into the beautiful night. This was an incredible, albeit exhausting, experience.
Jessie’s musings: Our crossing was a win for us, another big step toward being ready to embark on our big voyage. In all of the beauty we saw and as proud as we felt, our first night sail also highlighted one of my greatest fears about our upcoming voyage. I worry that I will find myself horrendously seasick on every passage. Seasickness is miserable and can be debilitating, but it also causes me to be a less competent sailing partner and places a greater burden on Neil to manage the boat. I suppose appreciating our fears is also part of getting ready…

14 thoughts on “Night sailing beneath a million stars”

Leave a Reply to s/v The Red Thread Cancel reply

"They were pedestals crowned with villages of table, staghorn, brain and other corals, garlanded in fans and sea grasses—ornate living cities teeming with hundreds of blue, pearl, and black-and-white striped fish the size of coins. Larger black and yellow fish circled the larger bommies, poking their round faces through windows in the structures and darting as we neared. Every surface was coated in sea life." ▪︎ New BLOG link in bio ☝️ Title: Mighty claws and pointy teeth: Getting acquainted with Suwarrow's wildlife ▪︎ #suwarrow #perfectreef #cookislands #southpacific #atoll #coralatoll #coral #islandtime #sailinglife #sailthetropics #snorkel #scubadiving #womenwhodive #cressi #marinelife #fish #tropicalfish #travelblogger #sailingblog #svtheredthread
Flashback to that one time in the middle of the Pacific when we dipped into a trough and a wave swamped the bow while I was working on who knows what...and my PFD delpoyed. Good thing we always carry spare cartridges! Also, although photos freeze moments, they also flatten waves...you'd never know we were bashing into 2-meter seas (which we had been doing for more than a week at this point)! ▪︎ #pacificocean #bluewatersailing #oceanvoyage #lifeatsea #womenwhosail #bigblue #pfd #lifejacket #tethered #safetyfirst #saltyaf #sailing #undersail #funnymoments #catalinamorgan440 #svtheredthread
Joy. Play. Comradery. Sunshine. Sea. Dolphins are the embodiment of some of life's grandest delights! ▪︎ #newsouthwales #australia #australiananimals #pacificocean #dolphin #commondolphin #dolphinsofinstagram #toothedwhale #cetacean #sealife #marinelife #lifeisforliving #joiedevivre #jump #splash #surroundmewithwater #sunshinestateofmind #playtime #sailing #svtheredthread
Summer sailing in the southern hemisphere just days before the summer solstice...bring your foulies! ▪︎ #bassstrait #southernocean #tasmania #australia #sailing #yachting #boatlife #monohull #ridethewaves #foulweathergear #hellyhansen #henrilloyd #ilovethisman #focused #catalinamorgan440 #catalinayachts #svtheredthread
Flinders Island astern. Being weather-bound for 6 days at Flinders Island was an unexpected highlight of our month of sailing. What a special place...mountains, beaches, local botanical gin, good food, and nice people. One day we will return...and next time we will have a rock lobster pot aboard! • #flindersisland #tasmania #discovertasmania #sailing #sailboat #monohull #fullsail #summersailing #sailingfamily #sailingphotography #chooseyourownadventure #lovinglife #lifeafloat #sailingstagram #waterworld #bringmethathorizon #catalinamorgan440 #svtheredthread
The last month of adventuring from Melbourne to Hobart have been just what we needed to reconnect with our love of sailing and of Red Thread. For the first time since we arrived in Australia in 2016, we have found secluded coves where we were the only boat, we've watched sunsets and sunrises, we've made new memories with friends aboard, and we've foraged for our dinner. We also introduced baby Sawyer to bluewater sailing and built a bit of confidence in our ability to parent afloat. It's been wonderful, and Tasmania has proven to be as charming as we'd hoped. We feel incredibly fortunate that we've been able to start exploring these waters and that we will continue to make this place our escape from the big city for the next few years...we return to Melbourne tomorrow. ▪︎ #quarantinebay #barnesbay #brunyisland #tasmania #sailingfamily #adventurefamily #raiseawildchild #familyafloat #kidsonboats #boatbaby #makingmemories #fillupyourcup #seaside #ourhappyplace #ergobaby #babywearing #escapethecity #womenwhosail #womenwhosailaustralia #catalinamorgan440 #svtheredthread

© s/v The Red Thread, 2019. Unauthorized use and/or duplication of any blog entries or photos without express and written permission from this blog’s owners is strictly prohibited. Excerpts and links may be used, provided that full credit is given to svtheredthread.com, with appropriate direction to the original content. Thank you!

sailing solo in search of an endless sunrise

Sail with the Flo

The adventures of a British couple, sailing around the world

I must go down to the sea again ...
Any Travelling Heart