We hoped the overcast morning sky would clear as the day warmed, but even if it didn’t, we would not be deterred by a bit of drear today! We had a field trip planned – we were off to visit the pearl farm we’d learned about during one of our long walks on Mangareva. Coffee chugged and breakfast gobbled, we dinghied to the wharf to meet up with Mike and Gill (s/v Romano; British), Sven and Lisa (s/v Randivåg; Swedish), and Mariel and Ari (s/v Adijewah; Dutch), all of whom we met initially during the Easter BBQ on Easter Island.

Together, we hitchhiked our way to Pension Maroi on the other side of the island, where Marie greeted us with fresh-squeezed lime juice. A small speedboat awaited. Michel and Marie had been rather surprised when we knocked on their door, stumbling through a few sentences in French, to ask if we might visit their pearl farm. Theirs is not a touristed operation!

The boat zipped through the lagoon we’d marveled at during our summit of Mount Mokoto, the driver knowing the channels between the reefs like the back of his hand. We tied up at one of the stilted houses in the heart of Mangareva’s pearl farming lagoon. Michel and his son greeted us, while a small team of others continued to work. There were no bells and whistles, just an authentic pearl farm run by a kind man who was happy to teach us about his life’s work. 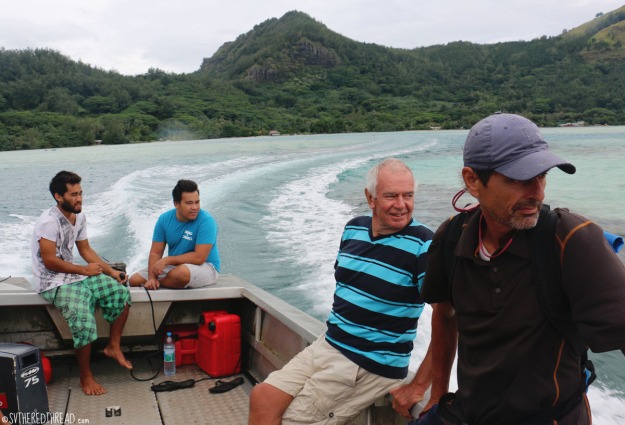 Michel started his farm in the 1980s, with a single panel of oysters and an outrigger canoe. He nurtured his oysters lovingly and in three decades transformed his modest startup into a thriving business that employs several of his family members and others in the community.

French Polynesia is famous the world over for producing the finest black pearls in the world. Although also known as “Tahitian pearls”, the nickname is a bit of a misnomer, since most are cultivated in the Gambiers or Tuamotus. Interestingly, black pearls aren’t actually black. They come in a range of colors, from sleek silver to deep emerald to elegant aubergine. Some have a rosy twinge, others a golden hue.

For as sexy as pearl farming sounds,
we quickly discovered that it is a far more complex process than we imagined.

Pearl farmers suspend ropes in the water column to collect the spat and grow their herd, if you will. When the baby oysters’ shells are an inch or so across, they are given a small piercing from which they are suspended on garlands and placed 8 to 10 meters beneath the water surface, where they to continue to develop. Over the course of 2 to 3 years, the young oysters are routinely cleaned and cared for until they are 3 to 4 inches in diameter and reach maturity.

The pearls in the Gambiers and most parts of the world are cultured. That means that when an oyster reaches maturity, it is seeded (also called grafting or nucleating) with a freshwater pearl called a nucleus. The nuclei used in French Polynesia’s black-lipped oysters are creamy white and are harvested from none other than Mississippi mussels. Yes, M-I-S-S-I-S-S-I-P-P-I. We learned that is the case for most pearls in the world! 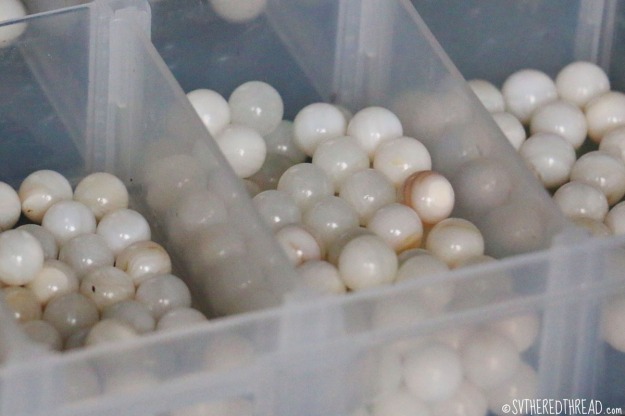 Seeding is a multistep process. First, a wedge is forced between the lips of the oyster to open the shell slightly. The oyster is then passed to the skilled hands of a grafter, who secures it in a clamp and uses a speculum to pry the lips a bit further apart (sounds uncomfortably like a pap smear, right?). Next is the actual implantation of the nucleus. The grafter utilizes precision tools to skillfully place the nucleus into the gonad of the oyster. The speculum is then removed and the oyster is tethered to a panel and returned to the sea. 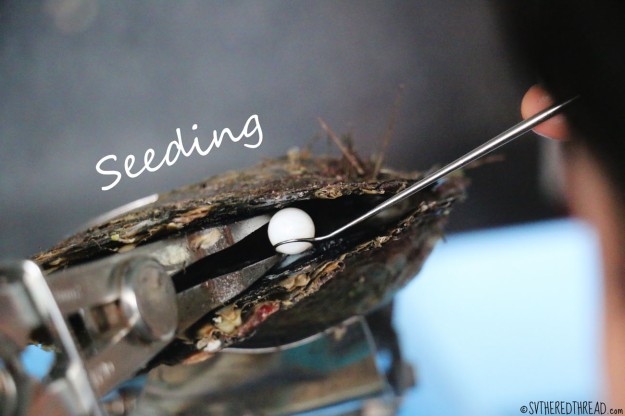 Right away, the oyster begins coating the pale Mississippi pearl with nacre, the substance that gives the pearl its iridescent sheen and color. The production of nacre is essentially an immune response to protect the oyster against irritation associated with the foreign entity.

Michel and Marie’s farm is thriving…
each grafter seeded 1,000+ pearls the day we visited!

For 18 to 24 months, the oyster adds layer upon layer of nacre, creating the rich colors that have become famous around the globe. The colors are determined by the mother of pearl or the beautiful hues that line the inner walls of each black-lipped oyster’s shell. During the incubation period, the farmer monitors numerous environmental factors, such as salinity and temperature, which can impact the quality of the developing pearls. The panels of oysters are routinely lifted from the sea and power-washed to ensure they are free from harmful organisms. 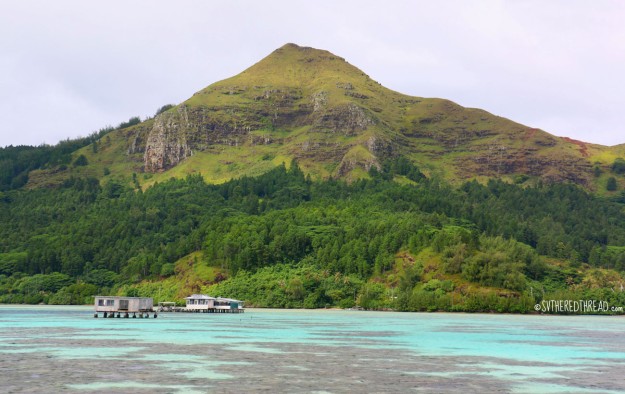 When the time comes to harvest black pearls, the precious gemstone is extracted from the oyster by a grafter, who reseeds the oyster if it is still healthy. Not all oysters will have produced a black pearl at the end of the incubation time, and most pearls will not be top-shelf quality. Only a 1-2% will fetch the most prestigious “AAA” rating. Given their popularity around the world, however, finding inexpensive pearls is not easy beyond the streets of Tahiti, the epicenter of black pearl trading.

Oysters that are no longer viable are opened and cleaned. I asked to try my hand at shucking one of the expired oysters, which was a slimy but interesting process! The adductor muscle is eaten and the shell is exported for use in crafts and jewelry. Michel invited each of us to eat a raw adductor muscle, which was actually quite tasty! The texture was a bit chewy and the flavor mildy salted but rich. Preparing ceviche with adductors is a local delicacy, which we’re certain would be absolutely delicious!

Bits and bobbles
The biggest surprise of our visit was when Michel invited each of us to select an oyster—any oyster—and to take home whatever treasure it contained. The eight of us selected our shells and watched eagerly as the grafter gently extracted the precious pearl inside.

Neil doesn’t fancy wearing pearls (go figure), but since we were each gifted one, we thought immediately of our dear moms back in the United States.

That said, I was delighted when in response to my incessant questions about the process, Michel placed a third pearl in my hand. The gem was a dark green beauty that I spotted among a montage of charmingly misshapen baroque pearls that lay cradled in a mother-of-pearl shell. I decided to save that one as a keepsake for myself. When we eventually reached Tahiti, we had our precious pearls set in three pendants. Two for our moms and one for me.

The price of a great pearl
The black pearl industry has brought immense wealth to the small archipelago, which inevitably has pros and cons. The wealth in the Gambiers is evident in the people’s dietary choices. Obscenely priced processed and packaged foods (e.g., chips, Coca Cola) from abroad are imported monthly on supply ships, and some of  the younger locals no longer eat the luscious pamplemousse and hearty breadfruit that lay spoiling beneath the shade of the trees. That aside, the economic income has likely been positive. We would argue that, most importantly, the pearl industry provides ample reasons for the islanders to continue to protect their precious lagoon.

The experience of visiting Michel’s pearl farm cost a mere 500 XPF ($5 USD), and with his generous gift of a one-of-a-kind pearl, the experience cost him more than it cost us! We enjoyed an intimate experience on a little-visited farm that made us appreciate why pearls—black pearls, in particular—are so highly prized. The visit made us look differently upon the gems we later gawked at in the window displays of jewelry stores in bustling Papeete (Tahiti).

Each pearl is a one-of-a-kind treasure, the result of years of nurturance and ingenuity, by humans and oysters alike. The experience was without question the highlight of our time in the Gambiers.

Thank you, Michel and Marie. 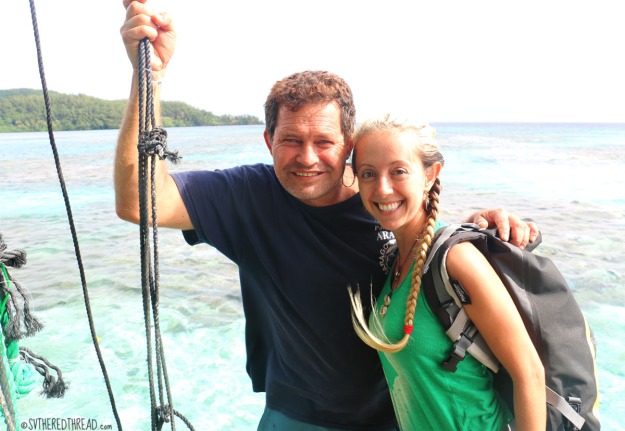 Pearls of knowledge: Facts vs. fibs