The breeze awoke with the colors of sunrise, as we hoisted our sails at dawn on January 24th. I sipped my coffee and wrapped my arms around Neil, overcome with a sense gratitude to be sailing once more after so many months away from our sailing life.

It was a balmy morning along the Costa Rican coast, and we intended to cruise from Quepos to Bahia Drake some 60 nautical miles south. As the morning progressed, however, it became clear that the direction and force of the breeze were not going cooperate. We were determined to keep old iron guts quiet and travel by the wind alone, so we opted to let go of our goal to reach Bahia Drake. We didn’t need to be there for any reason that particular day, so why force it? The Red Thread pointed her bow instead toward the small nook of Dominicalita.

Dominicalita’s dolphins
Our detour offered an unexpected delight. As we neared the anchorage off Dominicalita, a pod of the most enormous common bottlenose dolphins we’ve ever seen joined our bow wake! Their strong, streamlined bodies glided through the lazy sea beneath the blushing hues of sunset. Our finned friends escorted us deep into quiet bay, their breath spewing rhythmically alongside the hull, intermingling with the babble of our bow wake.

Two sailboats were already anchored in the small indent in the coast. Alcione, who we’d met a few days earlier, and Klickitat, whom we’d befriend a few days later. We later learned that Dominicalita’s dolphins had ushered each of them to anchor as well – clearly a well-organized welcome committee!

The anchorage at Dominicalita is tucked behind an arcing rock outcropping that is visible at low tide and serves as a sort of natural breakwater to buffer the nook from ocean swell. Unfortunately, all charm in the anchorage had dissolved by midnight as we rolled heavily through one of our more horrendous nights of sleep. The natural breakwater was not so effective in blocking the west-southwest swell. At dawn we weighed anchor and got underway before the sun peaked over the mountaintops.

Bound for Bahia Drake
For the second day in a row, we enjoyed a lovely, if not lackadaisical, sail. Our pace was slow, but the sun was bright and The Red Thread was performing well in the light air. As the sun sank low in the western sky, we neared the long, sweeping expanse of sand that stretches below the village at Bahia Drake. We fired up the engine just in time to drop our hook. The Captain [and bartender] stirred up two tropical cocktails, so vibrant it was as if the sunset had been poured directly into our glasses! We climbed atop the cabin and watched the colors in the sky [and our glasses] disappear.

One of the most alluring aspects of visiting Bahia Drake was its proximity to Isla del Caño, a lone island 15 miles off the coast, that is touted as having the some of the best diving in Pacific Costa Rica. During our six-month stint in the US, when work became stressful or our nomadic existence felt overwhelming, Neil would search the internet for dive photos from Isla del Caño to reaffirm why we were working so hard to resume cruising. We had hoped to sail to the island ourselves, but because it is a biological reserve, an expensive permit was required and our visit would have been limited to just a few hours anyway. As such, finding a dive outfit who would take us there was a top priority us when we ventured ashore. 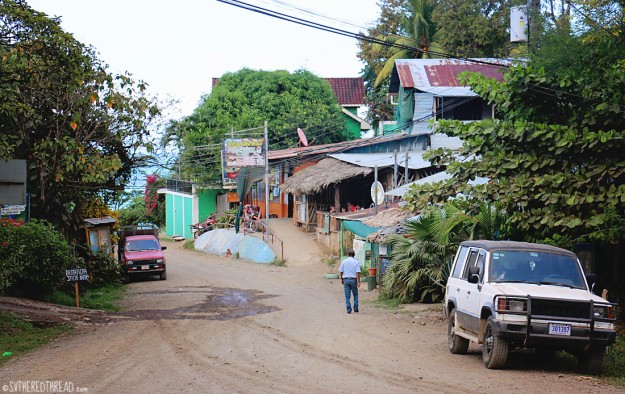 In the village, we found a small café where we sat on chunky log stools, ordered an obscenely large sweet pastry, and researched online the most reputable dive outfit in the dirt-road-rural, but moderately touristed town. Osa Divers was the clear winner.

Nestled in the trees behind the beach south of town, we found Link and his cousin lounging on the porch of a red a-frame house. A faded sign advertising the business was posted a hundred feet away, but it was clear that formal advertising wasn’t critical to the success of Osa Divers. Rave reviews about Link’s skills as a dive master were well-documented on travel forums, likely absolving him of the need to advertise formally. All he needed to do was wait for eager divers to wander to his front door. He offered us a discount since we have all of our own gear, and we scheduled dives for the next morning. He even offered to retrieve us from the boat, thereby sparing us the hassle of schlepping our dive equipment into the dinghy and up the beach.

Under the sea
By 8 o’clock the next morning, we were speeding west aboard a full panga toward Isla del Caño. Neil, a skilled and confident diver, was soaring with enthusiasm, eager to don his BCD and plunge downward. I, on the other hand, was practicing deep breathing. Diving still pushes me well-beyond my comfort zone, and I tend to spend most of my time worrying about my gear and trying to silence unhelpful thoughts in the otherwise peaceful undersea world.

Link was an excellent dive master, and his tranquilo demeanor helped calm my nerves. We dove two sites near what is known as “The Jardin.” Thousands of small pearlescent fish danced within arms’ length, while snappers, parrotfish, jacks, tangs, needlefish, and dozens of other colorful species went about their lives, hardly bothered by our presence. White-tipped reef sharks napped on the seafloor; stingrays swept the sand with their delicate wings; and dozens of garden eels’ arched their snake-like bodies upward, like little “s” curves waving in the sand. The vividness of the underwater world earned Isla del Caño accolades as the best diving we’ve ever done! Check out our video:

A few days in the bay
It felt almost surreal that after seeing only a handful of boats along this stretch of coastline last season, there were, at one point, four cruising boats in a Bahia Drake alone! Some were northbound, others south. Most tarried briefly, some not even going ashore before setting again to sea. We and the Klickitats stayed the longest, enjoying the simplicity of a small village, with pretty jungle scenery and a handful of open-air restaurants that served cold beer. One night, we had the pleasure of enjoying drinks and conversation with Link from Osa Divers on another, I standup paddle boarded around the bay at sunset, while Neil relaxed with a book in the cockpit. 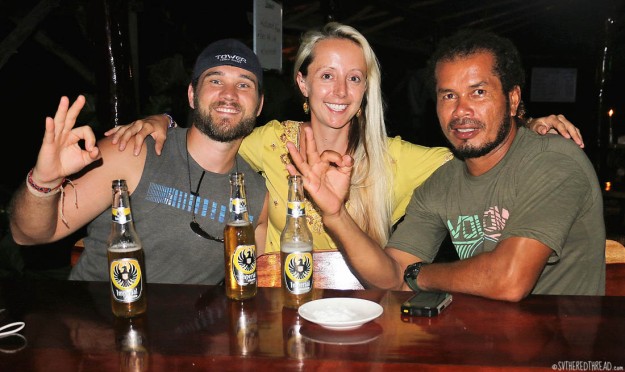 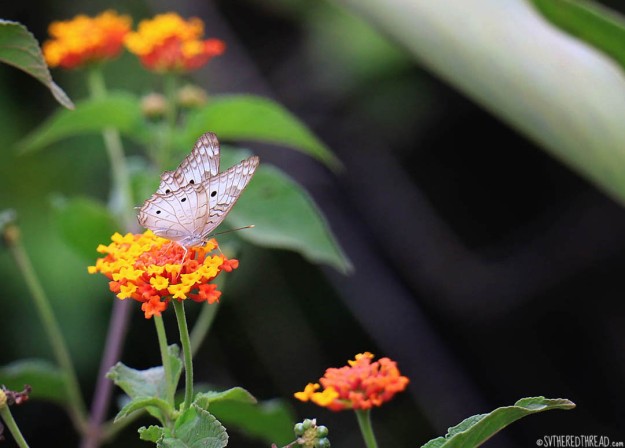 Estuary dinghy tour
During our final afternoon in Bahia Drake, we boarded our dinghy, along with Katy and Bill from s/v Klickitat and cruised up the nearby estuary during the final hour of the flooding tide. The estuary extended roughly a kilometer into the jungle. As we rounded the final bend wherein the water appeared deep enough for our little rafts and outboards, the delicate songs of the estuary were disrupted by the caterwaul of howler monkeys high in the trees. The Klickitats tossed a small anchor overboard, and we rafted our dinghies together to enjoy a concert by some of nature’s most powerful vocalists. There was a family on either side of the estuary, and we weren’t sure whether their howling was because they did not like us or they did not like each other! Either way, several plops of monkey poo rained from the canopy, fortunately missing our dinghies! We relaxed and let the beginnings of the ebb to propel us back to the bay, using our oars to negotiate the rocks and eddies. The midday sun beat down upon us as we emerged from the shade of the canopy and exited the mouth of the estuary. High spirits abounded; we had just enjoyed an impressive private jungle performance. 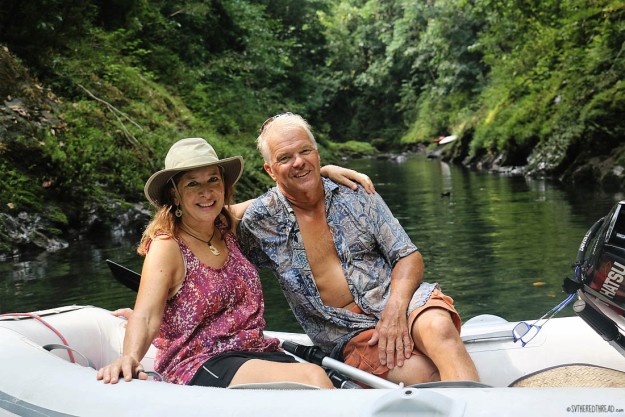 On January 31st, we weighed anchor at dawn bound for our final port in Costa Rica, the location where we’d make our final preparations to begin our Pacific crossing and pick up a third crew member!

Cruising commentary
Dominicalita had the potential to be charming under the right conditions, though even if the swell isn’t ideal, the dolphins alone may be worth a visit for some! The other boats who were there when we arrived found a bar/restaurant that was showing American NFL playoff games, which could be a draw for the cruising sports enthusiast. In our opinion, Bahia Drake is a must-see if you sail this stretch of coast. The large anchorage offers excellent holding; can be entered at night if need be; is the gateway for Isla del Caño; and is a lovely intermediary between bustling Quepos and Golfito, where clearance procedures may be completed. Maria’s Place, just up from the beach, has good WIFI, and if you’re interested in exploring Corcovado Parque Nacional, it is a nice place to venture off the boat to do so.
Dominicalita anchorage waypoint: 09°13’.665N 083°50’.683W
Bahia Drake anchorage waypoint: 08°41’.88N 083°40’.112W

Passage perks
Point of departure: Quepos, Costa Rica – 01/24/16
Point of arrival: Bahia Drake, Costa Rica – 01/25/16 (one-night stop in Dominicalita)
Distance traveled: 89 nautical miles
Total time: 23 hours
Engine roaring: 3 hours
Sails soaring: 20 hours
Average speed: 3.9 knots
Jessie’s musings: The thing that stands out to me most about this passage was the sense of serenity I felt…and the enormous dolphins we saw when we arrived at Dominicalita! Those two lovely days eased us back into sailing together in a most gentle way, enabling us to brush the dust off our skills under idyllic conditions. Light but consistent breeze, endless sunshine, and uncomplicated anchorages…
Neil’s reflections: The two most notable things for me were the odd route we wound up taking to Dominicalita (check our DeLorme inReach map) and that, for the first time ever, we were able to get fresh air into the cockpit by snapping up our center dodger window. Call us fools, but did not even realize this was possible. Remember we started off with this boat in the upper latitudes, where air flow like this is not really necessary.

11 thoughts on “Back in the groove: Sailing and scuba in Central Costa Rica + Ep. 10 VIDEO”