On May 13th, we weighed anchor at 2:50 am, hoping to reach our final port of call in the mid-afternoon. Our exodus from Bahia Ballena greeted us with good winds. Our guests awoke. The sunrise was a wildly stunning kaleidoscope of oranges and reds and yellows that rivaled any dawn we’d logged in our memories.

In addition to a spectacular sunrise, King Neptune offered us the largest sierra we’d ever caught! A truly beautiful fish…and dinner.

Later in the morning, when the day had heated up and the winds calmed down, the Gods of the skies, too, shared with us a surprise. A delicate little yellow bird appeared and dove right into our cabin, where it began flying about wildly and crashing into the cabin windows, uncertain as to how it should make its escape! Neil snuck up on the little creature and caught it, gently cupping it in his hands. We named him Jesusita the Breakfast Bird. He stayed with us, perched on Neil’s finger or the helm for nearly an hour, before he flitted off into the blue. Jesusita left us about the time the wind subsided. We fired up the iron sail and motored on toward our destination, where Mark and Helen would end their trip with us.

Decisions, decisions, decisions
We had made a major decision just days before Mark and Helen arrived, one we had only shared with our moms until we spilled our news with our visitors. We would be returning to Seattle in June. Just weeks separated us from the life we had built aboard our boat and the city we’d left behind the prior September. The decision not to cross the ocean this year had been a difficult one to make, but we both felt really good about our choice. The what to do instead had been an ongoing topic of conversation and debate.

We had ruled out finding work in Central America, as our Spanish is woefully inadequate and wages are low. After two months of research and reaching out to our network, we’d also decided against pursuing crew positions on mega yachts, as such work would require more upfront investment (i.e., obtaining pricey credentials, flying to the Caribbean to seek jobs without any guarantee of securing work). Seattle was a safer, and likely more lucrative, bet. Returning to the States also guaranteed us more time with the people we love most in the world. Granted, neither of us had a job lined up and we didn’t know where we’d live, but a hope that everything would work out kept our spirits buoyed. The biggest decision we now had to make was where to leave our beloved home.

From the time we departed Chiapas, Mexico, we began entertaining possibilities and had identified three. We didn’t anticipate that a fourth option would present itself when we arrived in Quepos…

Bienvenidos a Quepos
Our initial introduction to Quepos was a bit nauseating. Seas in the anchorage beyond the breakwater of Marina Pez Vela rolled and bucked. Mark and Helen would only be with us for two more nights. Rather than suffer through unruly nights at anchor, the four of us decided to tuck into the marina, where we’d be able to easily hop on and off the boat and could enjoy a reprieve from the heat. As soon as we docked, we cranked up our reverse cycle air conditioning system and cracked a cold beer.

Back in the lap of luxury, proper showers were in order for all of us. We bathe exclusively off the back of the boat when not in a marina (which is most of the time), and as much as we adore that activity, indoor bathing feels quite novel when we get to do it. Cleaned up, we cooked up a bit of our sierra, and then wound down the evening with a walk into town. We quickly developed a liking for the marina and the town. The following day, we fell in love with the region in general. 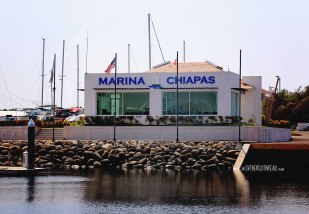 Cruising commentary: Options for long-term moorage in Central America
Marina Chiapas (Chiapas, Mexico): A lovely, modern facility run by Ernesto and Memo, who are fantastic. The climate is dry, which is good, and they offer dry-docking. It is also the most cost-effective option between southern Mexico and Panama, charging only a few hundred dollars per month.

Puesta del Sol (Asseradores, Nicaragua): Puesta del Sol, too, is lovely. Although it is three hours from the nearest international airport and grocery stores and other services are limited in close proximity, it is a charming venue, with an infinity pool and a friendly owner. Remaining in a wet slip is the only option for storage, which is the rule rather than the exception along the Pacific Central American coast. We ruled out that option as there were several electrical surges when we stayed there, and we worried about how such surges might affect our boat (and our level of worry when we were thousands of miles away). That said, there were several sailboats that were moored there long-term when we visited in April. Puesta del Sol was the second least expensive option. 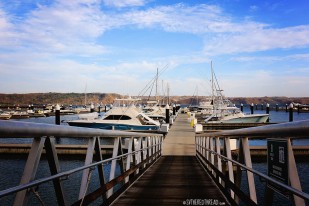 Marina Papagayo (Bahia Culebra, Costa Rica): Marina Papagayo is a truly state-of-the-art facility operated by Dan, whose commitment to running a top-of-the-line marina was apparent immediately. Our meeting with him when we re-entered Costa Rica left us with confidence we could trust him to care for our home. A wet slip is the only option at Marina Papagayo and costs are quite steep, though Dan was willing to offer us a far better deal to stay for an extended time than the typical daily rate. We knew the money would guarantee us safekeeping of our home. Liberia, less than an hour away, has an international airport, which would make our departure and return simple.

Marina Pez Vela (Quepos, Costa Rica): Marina Pez Vela is also a very new marina, with prices comparable to Marina Papagayo for long-term moorage. It is unique among the others in that it has a boatyard on site and is situated within walking distance of a town for easy provisioning. A wet slip is the only option, and the area receives more rain, both of which were drawbacks. We liked the Harbormaster, Carter Takacs, and the facility was lively with fishing boats and activity. The area felt safe, and the marina has excellent security. There was also a great deal of work being done to expand the facility, including the addition of several restaurants. In general, the area quickly became among our favorites of our voyage. The landscape looks like a Costa Rican postcard. The nearest airport is in San Jose, a 3- to 4-hour bus ride away, which would pose challenges (but not insurmountable ones).

OUR DECISION
We ultimately chose MARINA PEZ VELA for three reasons. First, the Harbormaster, Carter, worked with us to get us a slightly better rate than Marina Papagayo was able to offer. Secondly, it has a reputable boatyard. We knew that when we came back, we’d need to haul out to paint the bottom of The Red Thread and to address a few repairs. Being able to take care of anticipated maintenance tasks (and any that emerged after six months of being without ongoing love and attention) would be a valuable convenience.

Finally, we were already in Quepos. Marina Papagayo was nearly 200 nautical miles north. Puesta del Sol and Marina Chiapas were 300 and 650 nautical miles away, respectively. At best, two days would be needed to get to one of our other options. At worst, well over a week. We didn’t know whether we could rely on winds, and motoring hundreds of miles had absolutely no appeal to us. In addition to sizable passages north to return to either of the two latter options, a projected January return would put us smack in the middle of the time of the year when Papagayo winds are generally worst. Given that we intended to resume a journey south, it was very possible that we could be held up for extended periods due to weather. After all, we knew one boat who had been stuck at anchor in Bahia Santa Elena under the seige of 60-knot winds for over a week. We were a bit nervous about potentially hitting 50-knot winds again ourselves. Finally, if we stayed put, we would have time to enjoy another inland excursion, this time to Panama, and to focus intently on decommissioning the boat upon our return.

Passage perks
Point of departure: Bahia Ballena, Costa Rica – 05/13/15
Point of arrival: Quepos, Costa Rica – 05/13/15
Distance traveled: 58 nautical miles
Total time: 12.25 hours
Engine roaring: 6 hours
Sails soaring: 6.25 hours
Average speed: 4.7 knots
Jessie’s musings: We didn’t expect our passage from Bahia Ballena to Quepos to be our last of the season. We thought we’d be sailing north again, likely to Marina Papagayo. Sometimes birds, generally seagulls, are said to appear when land is near. Perhaps little Jesusita was an omen or sorts that we were about to be landlubbers again; that our freshman cruising season was winding to a close. Catching a sierra, perhaps my favorite fish, and sharing the sunset and serenity with our dearest friends was priceless.
Neil’s reflections: I have never seen a sunrise like the one we experienced on our passage to Quepos. As we weighed anchor that morning in the dark, we could look to the west and see the last remnants of the nightly squalls with their big thunderhead clouds blotting out the stars and the flashes of lightning. The darkness gave way to a beautiful day, which turned out to be the final passage of our journey, unbeknownst to us at the time. Of course, only the best of company contributed to a spectacular calm passage.

8 thoughts on “Expect the unexpected: Our final passage and The Red Thread’s new marina”