For us, a true joy of traveling is the way our life becomes entwined with people we meet along the way. Tim and Emma, a couple of backpacking Brits, were an exceptionally delightful find and the nearest we’ve experienced to picking up hitchhikers on the high seas!

I recently shared my account of the overnight passage they completed with us from Puerto Barillas, El Salvador to Puesta del Sol, Nicaragua in the post titled, “A vommer, a barracuda, y la bienvenida a Nicaragua.” Now it’s time to hear their sides of the story. Read on [imagining your favorite British accents] and enjoy their amusing recollections…

While I was in Utila a lazing in a hammock with a beer, I got a message from a guy I had met a few weeks earlier saying, “Come to El Salvador I’ve got us a ride on a boat to Nicaragua.” Yeah, yeah, I thought, sure you do. Fast forward two weeks and we stepped sweating (seriously sweating) off the bus after a fraught conversation in broken Spanish and arrived by luck rather than skill in the exact place we were meant to meet Jessie. This, in a country with no data roaming and with limited Spanish was by no means easy, and we felt suitably chuffed with our efforts (how easy we backpackers are to please).

I was very excited to meet Jessie after hearing so much about her and Neil and as soon as I did (in an air conditioned super market luckily), I felt immediately comfortable and could already tell this was going to be some trip. As we arrived at the marina in the searing heat to meet Neil and get checked out of El Salvador (we got a stamp, most people who visit El Salvador don’t; again, easy to please) we headed out to The Red Thread to start our journey. The Red Thread is such a beauty. I could tell she was going to show us a good time, and she didn’t disappoint.

Cracking open a beer as we navigated the estuary (big shout out to the local in the fishing boat who guided us) it was time to start bonding with our new friends and what a place to do it, on the estuary, surrounded by breathtaking volcanic scenery. As we approached the Pacific Ocean feeling the waves rock the boat I was hit by a wave of contentment and happiness.

There is nothing like the open ocean (it’s in my genes, as my father would say). As the ocean is in my genes (apparently), so is a strong sea stomach. Unfortunately for Tim, it is most definitely not, and despite a prior warning from Jessie to take some pills (he refused, FYI, so self-inflicted) it wasn’t long before the very, and I mean very, gentle movement of the ocean caused him to vom over the side of the boat. How very “un-British” of him. Naturally I had little sympathy and while he spent most of his time hanging his head over the boat retching, I sat back and enjoyed the view of the Pacific all around me, and what. a. view.

From a stunning sunset to playful dolphins putting on a show it was a truly magical experience and with the American flag fluttering in the back I felt like I was in a Hollywood movie (minus the love interest vomming). After the sun had set, more beers had been drunk, dinner eaten and more vomming from Tim, we got down to the nitty gritty of politics, religion, and sex. There is no such thing as taboos with such great company. With Jessie asleep and Tim passed out (vomming is hard work after all), I kept Neil company during first watch, we were in the middle of a conversation about Gladiator when before I knew it I was being shaken awake to watch the most incredible burning auburn sunrise. 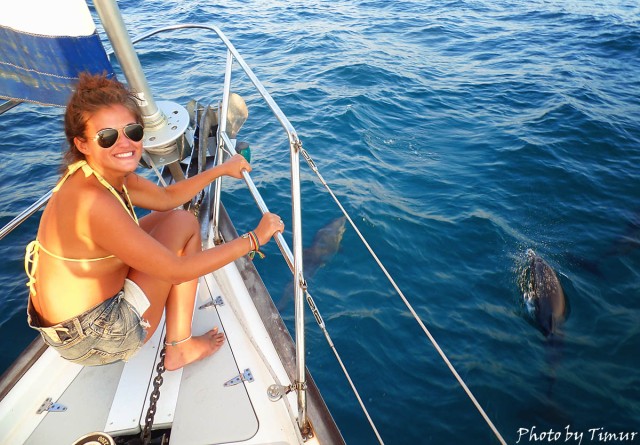 The crossing had so far been drama free but that was about to change, a fish caught off the back of the boat and Neil told me, “You’re up girl!” So I went to reel it in, except, I couldn’t, as in really couldn’t, no doubt thinking it was my lack of upper body strength (true) Neil gave me a hand but it soon became very clear this was not an ordinary fish. It was a sea monster. Politely pushing me aside, Neil rolled up his sleeves and got to work on what will forever be known as “The Great Barracuda Killing” I have to hand it to Neil and Jessie that was impressive stuff. Luckily we weren’t too close to the land or we might have been arrested as the boat looked like a murder scene. After a quick clean up and Neil’s expert fileting skills, we arrived in Nicaragua. 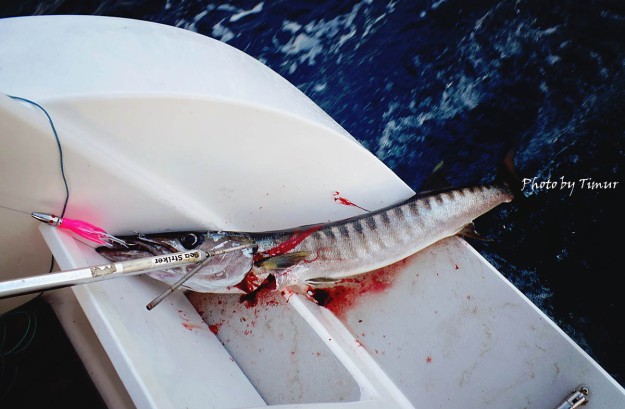 After wowing and amusing the immigration officials with pictures of the sea monster it was time to down a shot of rum and jump in the infinity pool and spend some more time with our new friends and reminisce about the last 24 hours. And what a 24 hours it was.

I was extremely excited to be joining Neil and Jessie for a small part of their long journey on The Red Thread. After spending a day with them in Copán, Honduras, I was pleasantly surprised that they had invited me to join them to sail to Nicaragua. Of course I jumped at the chance.

The plan was to join them a week later in Usulutan, El Salvador, to begin our adventure. Surprisingly our meet up went exactly to plan without a hitch. With our lack of Spanish to help ask for directions and the fact we could only communicate with Neil and Jessie via email we got to the meeting spot right on time. The excitement continued to build as we were getting closer and closer to the marina to meet up with Neil and officially sign-off from our time in El Salvador. As we said goodbye and sailed away we looked back at the seemingly endless amount of volcanoes on the horizon as the sun began to fade. The trip had officially began, so we celebrated with some ice cold beers. 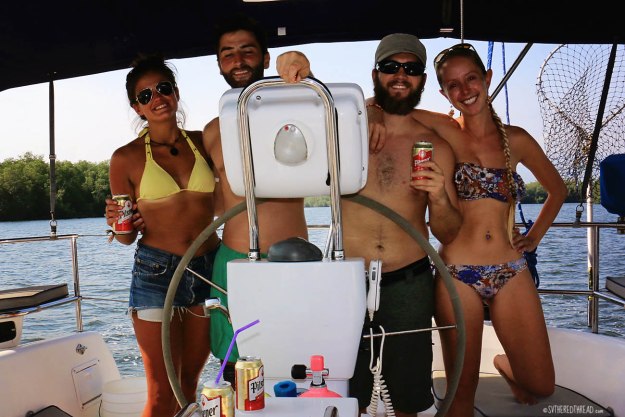 Unfortunately, I underestimated the effect the sea would have on me, claiming I’d be fine and sea sickness was for wussies. But of course I was wrong. Within an hour of being on the boat I started to feel my belly grumble, by this point it was too late. From then on out most of my evening consisted of my head dangling over board “vomming” over the edge. I’d like to lie and say the sea was incredibly rough and we were fighting against the battering waves, but no. There was barely a ripple, in fact I don’t think I’ve ever seen the sea so calm. Neil and Jessie were incredibly understanding and seemed genuinely concerned. Emma, on the other hand, gets extreme satisfaction from seeing me in pain and found the whole situation extremely amusing. I don’t think I’ve ever seen a wider grin on her face as she sat there with the sea breeze blowing through her hair, a beer in hand, watching the sunset over the Pacific with a silhouette of me vomming over the edge of The Red Thread. Her idea of heaven.

Regardless of the situation I found myself in, I was still having a great time on the boat. I powered through, had a beer, and enjoyed the rest of the evening with great company (while permanently lying flat on my back). The next morning I felt I had to redeem myself from the apparent “dry lunch” I was being (quote Emma). The sun was yet to rise but of course Jessie was awake as someone had to look after the boat. We continued our debates from the night before until the sun began to poke above the horizon to reveal the first glimpse of the Nicaraguan coastline. By this point I assumed we’d traveled hundreds and hundreds of miles, just to be told we were actually traveling at walking speeds.

Once everyone was up we all just continued to watch one of the best sunrises I’ve ever seen, before sailing into the marina to finish our short but sweet sail adventure. From the moment we met Jessie in the grocery store in El Salvador, to the time we left the marine in Nicaragua, I couldn’t have asked for a better experience (minus the sea sickness) from the nicest hosts I could have asked for. So of course we had to arrange another meet up in Costa Rica down the road…

6 thoughts on “GUESTBOOK: A tale of two “boat”packing Brits by Tim & Emma”