After a day of tackling a few boat projects and unwinding from our overnight passage, Neil, Tim, and I were bound for another inland adventure! We left The Red Thread tied securely to a dock at Puesta del Sol Marina and caught a 6:30 am chicken bus from a deserted gas station on the corner of a dirt road. We  Within a couple stops, the bus was chockful of Nicaraguans and we three gringos.

Ch-ch-ch-Chinandega
We rolled into dusty Chinandega at 8:00 am and came to a stop in a market. After a short walk to a busy street, we began asking directions to the bus station. A brief negotiation later, the three of us were crammed hip-to-hip in a rickshaw, speeding through Chinandega’s streets, passing bicyclists, horsedrawn carts, and cars.

After a bumpy 20-minute ride, we paid our rickshaw driver and entered the already-bustling outdoor bus terminal, where babies with dirty faces played in makeshift cribs between the buses and crates of soda and fruit. Their mothers’ foreheads were beginning to glisten with beads sweat, as they peddled baked goods and vegetables a few feet away from their babes. The women balanced trays of snacks and sodas on their shoulders. Sodas were poured in plastic sandwich bags; straws secured with rubberbands protruded from each pouch.

We found our next bus and sat down on colorful vinyl seats. A chubby-cheeked girl boarded with a tray of pastries and struck up a conversation with me. Her name was Ruby. She convinced me to purchase a nibble, and I bought a soda for her from another young peddler. We sat together gabbing in Spanglish until our bus to León was all but backing out of the station.

On the road to León
We whirred by fields and towns and bicycles, and within just over an hour we were in the sweaty palm of León, the cultural hub of Nicaragua. Like many Central American cities, León’s history has been shaped by the fierce forces of nature. In 1610, nearby Volcán Momotombo exploded violently with lava and tremors. The eruption terrorized the region and leveled the city. The location of the city was shifted and rebuilt with stunning 17th century Spanish colonial architecture. León was the original capital of Nicaragua, but its location was eventually moved to Managua.

León’s bus depot was a chaotic jumble of buses, peddlers, carts, and color. “No gracias, no gracias,” we stammered to rickshaw drivers who were propositioning us for a ride. Our eyes darted around, trying to get a bearing on which direction we needed to go. We didn’t have a place to sleep, but somewhere amid the maze of streets and montage of stunning churches, such as Iglesia la Recoleccion and Iglesia El Calvario, we’d find one.

Dictators, quakes, and rebuilding [this section is for the history buffs only]
Nicaragua’s political history has been tumultuous. The US occupied the nation for two decades in the early 1900s, withdrawing when the Great Depression crippled our economy. Nicaragua’s liberal leader, Sacasa, was overthrown by a US-backed dictator, Anastasio Somoza Garcia. He and his two sons, the Somoza dynasty, ruled the nation for the next 40 years. Their leadership subdued efforts from a contingent of university students, dubbed the Sandinistas, who demanded political reform. After a 6.3 earthquake killed 6,000 Nicaraguans in 1972, the nation erupted in chaos. The National Guard killed thousands of citizens in an effort to quell the uprising. In response, the Nicaraguan people rallied around the Sandinista movement, driving the Somozas from the nation in 1979. 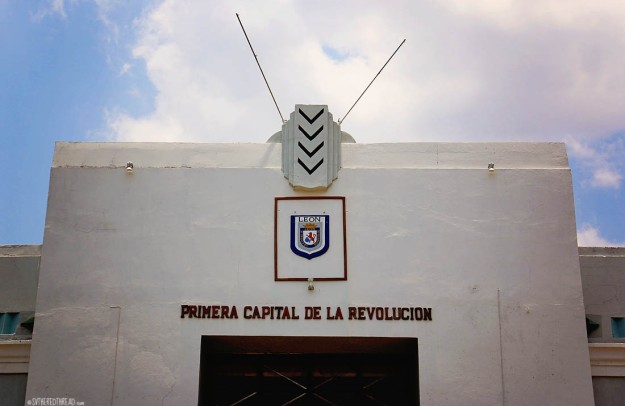 Nicaragua had been decimated by years of revolution by the time the Sandinistas took control of the government in the early 1980s. Tens of thousands had died, and the nation was broken with poverty. Left-wing movements nationalized some of the nation’s financial and industrial enterprises, which attracted the support of Cuba and the Soviet Union, who armed the Sandinistas. Driven by fear of communism, Ronald Reagan, withdrew all US aid. The US then armed Somaza’s troops who had fled to Honduras, the Contras, and provided military training to support attacks to overthrow the Sandinistas. The Sandinista government became increasingly repressive throughout the 1980s. In 1990, to the surprise of the Sandinistas and Contras alike, Violeta Barrios de Chamorro, widow of Pedro Joaquín Chamorro, an influential newspaper editor who had been assassinated years prior, was elected president. Chamorro was not a part of either of the prominent parties and the transition to new leadership was accepted with relative peace by the opposing factions. Nicaragua began to rebuild.

Political conflict has continued over the past two decades but in a generally nonviolent manner. Contemporary battles are against economic strife, as Nicaragua remains the most impoverished nation in Central America. Recently, ground had been broken on a transoceanic channel that will dwarf the Panama Canal and hopefully bolster Nicaragua’s economy.

Pounding the pavement
We made a three-bed dorm in Hostel Guardabarranco our home base for the next two days and wandered the city’s gridded blocks as far as our feet would take us. León was the seat of many of the key events during the revolution, making the city a historical gem to explore. Nicaragua’s intellectual roots were also planted in León, where the nation’s first university was established and thousands of students continue to travel there in pursuit of higher education. Alongside its scholarly flair, León bore a rough-around-the-edges charm. 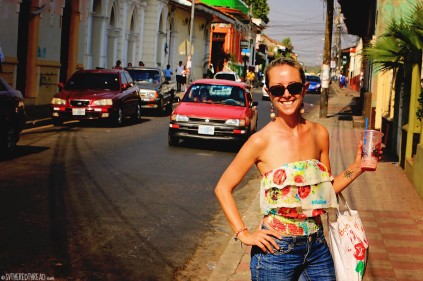 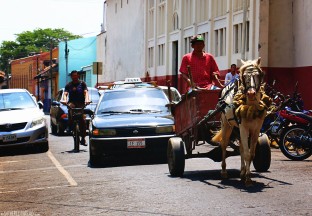 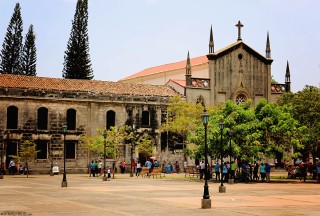 We spent our days exploring colonial streets and colorful markets near the Parque Central. The heat was almost suffocating and, at times, the only souvenir we had the energy to seek was a bottle of water or a frosty fruit smoothie to quench our thirst. During moments of ambition, we haggled over prices for colorful tank tops or woven bracelets. At night, we ate mysterious fried streets foods near the Cathedral, where street lights shone over fold-up tables that were covered with vinyl floral-print table cloths. We discovered the glories of Toña beer and Flor de Caña rum, Nicaraguan delights. Tim and Neil even went and saw the latest Fast and the Furious film, which was showing in English (with Spanish subtitles)!

Sights to behold
León is home to the largest cathedral in Central America, a structure that was completed in the mid-1800s and took over 100 years to build. The grimy exterior of the Cathedral protects an airy and pristine interior. The neutral color palette embodied the house of worship with an air of serenity, and I was enamored by the intricate designs that were carved elegantly into the pillars and alters. Had we visited during proper hours, we would have ventured to the roof of the Cathedral, where white-washed turrets and domes create landscape of architectural ice cream cones. 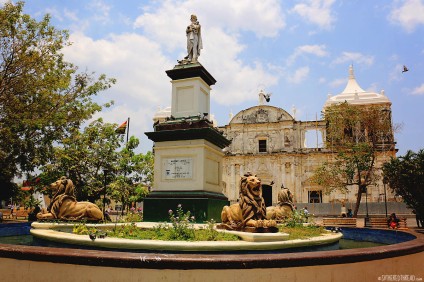 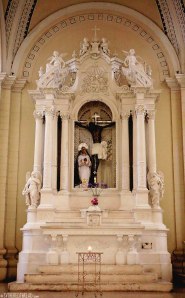 We explored the El Museo de Tradiciones y Leyendas (Museum of Traditions and Legends), which ranked among our more bizarre experiences. The museum is housed in an old prison, where captives reportedly received heinous treatment and were the subject of disturbing acts of violence. Those scenes and others recounting the city’s tumultuous past are immortalized in images painted in black on the walls of the building. The walls of a courtyard are lined with striking mosaic murals that illustrate stories of Nicaragua’s history and cultural legends. Those thought-provoking and intriguing elements were quite interesting. 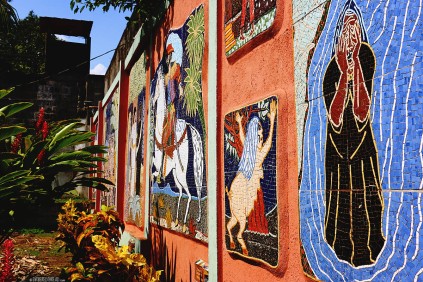 The peculiar aspect of the experience was the collection of puppets of all sizes that stared at us from random corners of the complex. One was a gargantuan woman, who towered some 30 or 40 feet high. Others were only inches tall. There were puppets of cows and horses, cowboys and indians, religious figures and children, and wild-eyed women. From what we understand, puppets have significance in Nicaraguan folklore, but we could not get past their absurdity… 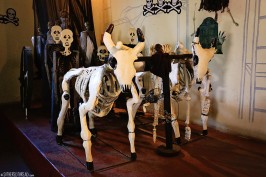 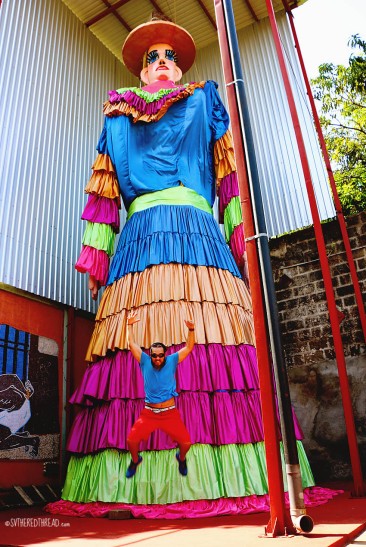 We also visited Galería Héroes y Mártires, a showcase of black and white photos of men, women, and children who died fighting for the Sandinista cause in the revolution not so long ago. In America we are nearly two centuries beyond a civil war, and while we are not without internal conflict, imagining such a rupture within our borders is unfathomable. The faces told powerful stories.

León is home to numerous other museums and historical attractions that would have been lovely to visit, including the home of Rubén Darío, Nicaragua’s most famous literary figure. As it goes, however, choices must always be made; we prioritized exploration of the nearby natural beauty. We were bound for the hills…Nicaragua’s volcanoes!

2 thoughts on “Lively León: The heart of Nicaragua”