FYI: We created a new VIDEO!
Check out the link at the bottom of this post!

Finding a new favorite
Even after officially checking out of Costa Rica, it is not uncommon for cruisers to spend a few days vagabonding from bay-to-bay in the nation’s northern waters before crossing the border into Nicaragua. We were no exception. Little did we know that on our northbound scoot, just around the corner from Bahia Culebra past the monstrous King Kong Rock, we would drop our hook in one of our favorite anchorages of our entire voyage. 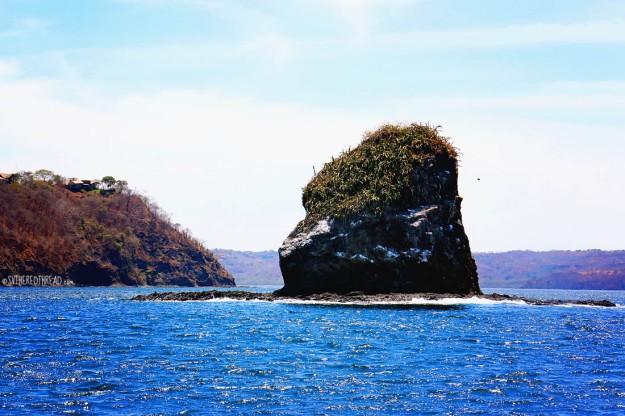 We arrived in Bahia Huevos in the early afternoon and set our anchor next to a boat full of tourists who had been ferried over for an afternoon of snorkeling. As they swarmed one side of the bay, we pulled on our masks and fins and set out for the opposite end of the cove. There weren’t many fish to see, but the water was cool and the sun warmed our skin. When our bodies began to feel chilled, we swam to the beach explored the volcanic tidal pools, where tiny fish wiggled about, waiting for the seas to rise again. The rocks formations were beautiful, each pit and groove gurgling a song whose lyrics sang of the ceaseless rhythm of the sea. 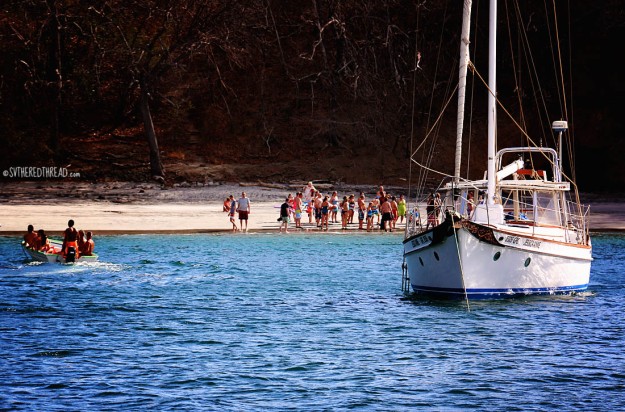 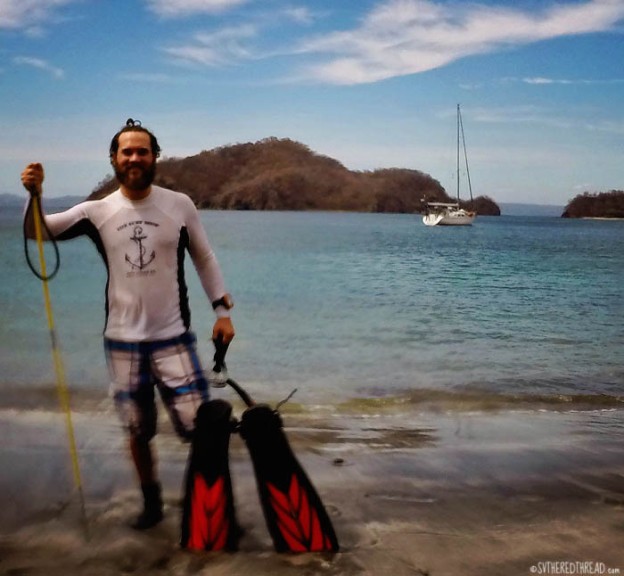 As the late afternoon sun sunk toward the horizon, we found ourselves alone in the bay. We hosed ourselves in freshwater from the mouth of our swim step spout, a boat bath. We watched a coati (i.e., a cousin to the raccoon that we’ve taken to referring to as a “tree badger”) tiptoe across the beach, scavenging for watermelon rinds and pineapple skin left behind by tourists. To cap off our day, we launched Miss Sassy, grabbed the fishing pole and a couple beers, and rowed to the rock outcropping in the southwestern corner of the bay. Fish eluded our hook, but we caught a sunset that lit the sky with such intensity that the water was ablaze with fiery light. Few days on our voyage have been quite so sweet, and the next was to be all the more delectable. 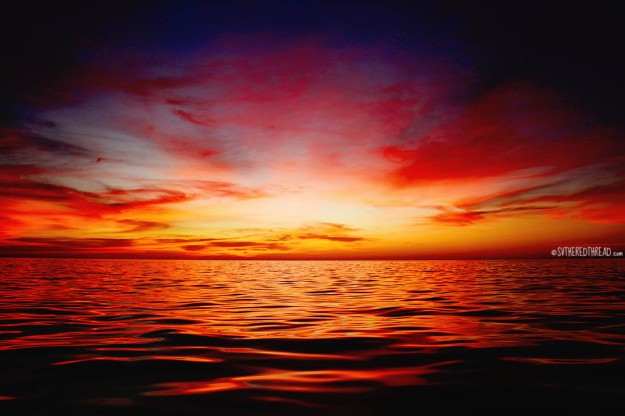 I woke Neil at 7:30 am, no longer able to contain my urge to launch our kayaks and to explore deeper into the bay, where the water shallows, making anchoring unrealistic for a keel boat. 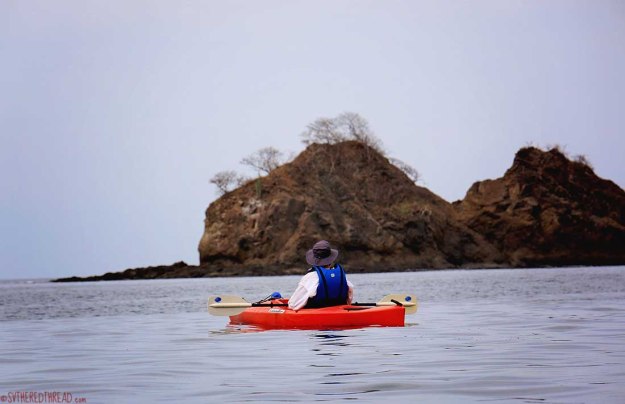 “Huevos” on a small island
Four islands guard the northern arc of Bahia Huevos. Two are hardly more than large rock outcroppings; two are small, steep mounds, barely one-third of a mile across. From a distance, they appear quite lifeless. As we sculled from the inner shoals of the bay and neared them, however, we heard the throaty yowls of howler monkeys. Neil, already a decent distance ahead of me, accelerated his pace. I had been snapping photos of pelicans who lazed on the volcanic rocks along the ocean break. I quickly stashed our camera back into my dry bag and paddled frantically to catch up. 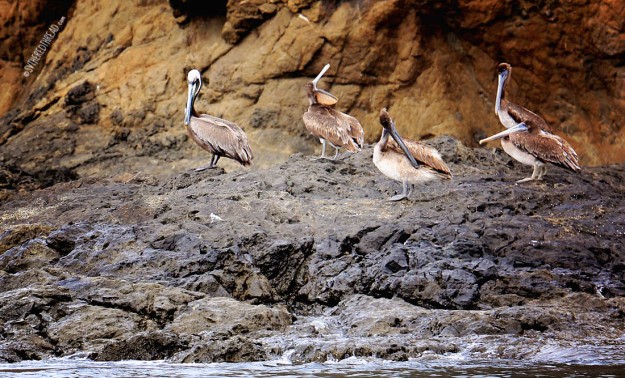 We’d gone monkey scouting several times but had only seen the creatures off in the distance or with the aid of binoculars. Yet here we were, sitting inches above the ocean, staring at a tree full of howlers! We dashed our little orange boats onto the sand and crept closer. Howler monkeys are brown-black in color, with dark, soulful eyes. Their only pale flesh identifies unmistakably the bits that confirm their sex (e.g., ahem, their “huevos”, if you will). 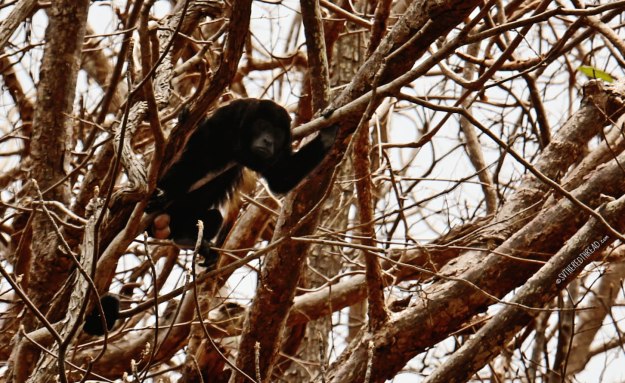 We had happened upon a family: a mama with her babe clinging to her belly, a protective papa who was riled up by our presence and rather vocal, and two smaller members of the tribe whom we guessed might be adolescents. 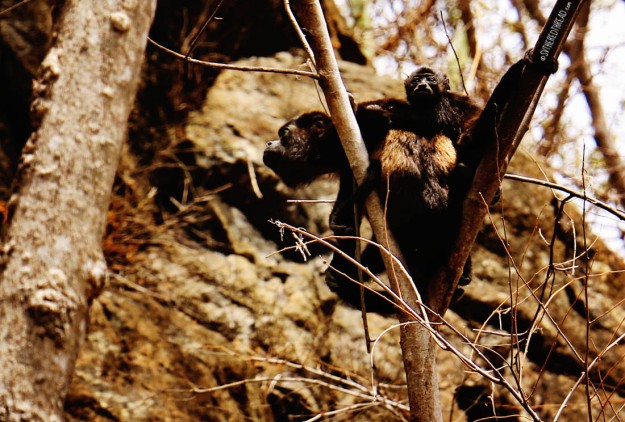 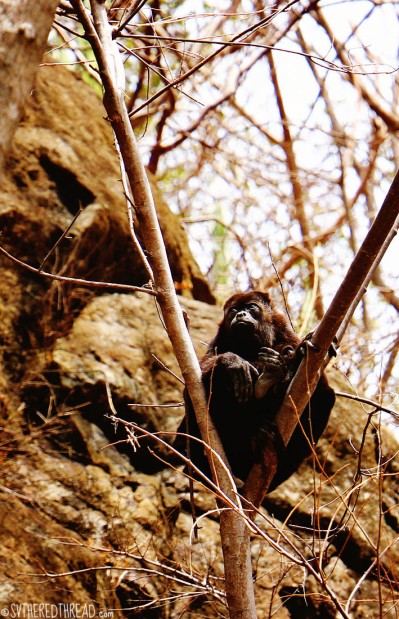 The monkeys maintained their territory in the trees above, while another world buzzed at our feet.

In the world on the sand was a tangle of hermit crabs wriggling feverishly in a snarl of withered seaweed. My obsession with hermit crabs was born…check out the video below!

Later that afternoon, we donned green t-shirts, and I mixed up brightly colored cocktails in honor of St. Patrick’s Day. After all, who really needs Celtic blood or an Irish pub to celebrate one of Ireland’s preeminent patron saints?!

A couple of hours later, we realized that the holiday was actually the day prior. What a beautiful thing it is to lose track of days! 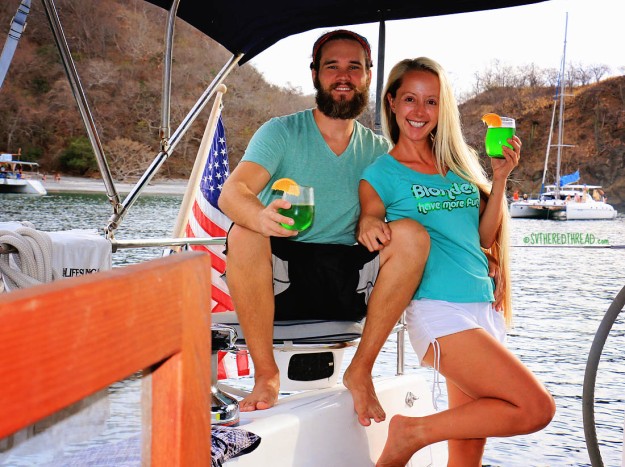 We planned to continue our journey north the next morning. That evening, we rowed to shore one last time to explore the beachfront cave at the southern bend of the bay and to stretch our legs along the sand. 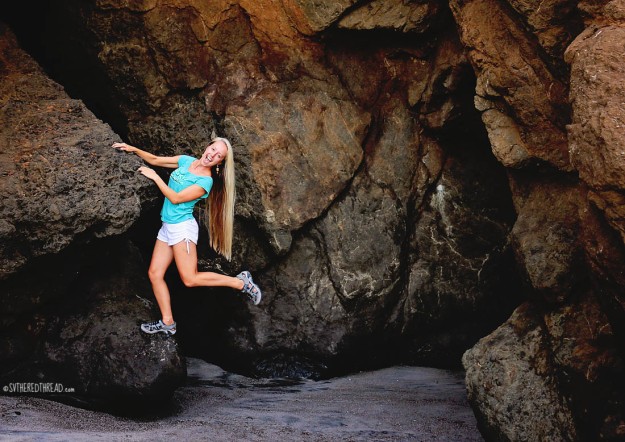 Gettin’ crabby
in contrast to our afternoon exploration the day prior, when the sun had seared the seashore into silence, the Oreo milkshake sand appeared to be alive in the muted hues of dusk. Hundreds, if not thousands, of hermit crabs scuttled busily across the sand! We had seen a handful of the little squatters after our snorkeling excursion the day prior and a few more on the sands of the monkey island, but here, the shore was a metropolis of the tiny creatures. 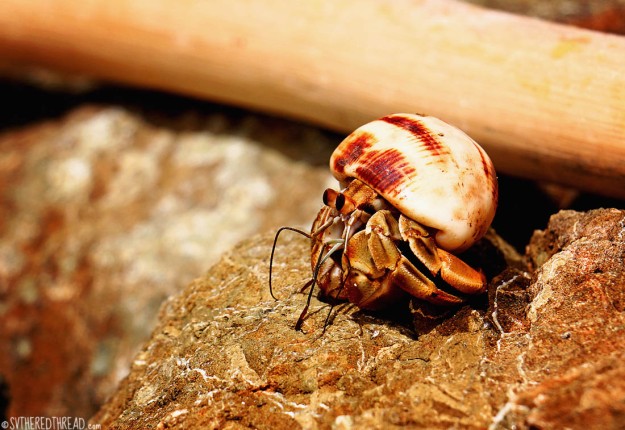 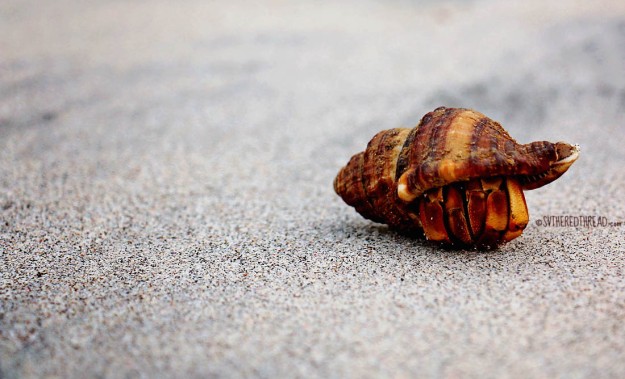 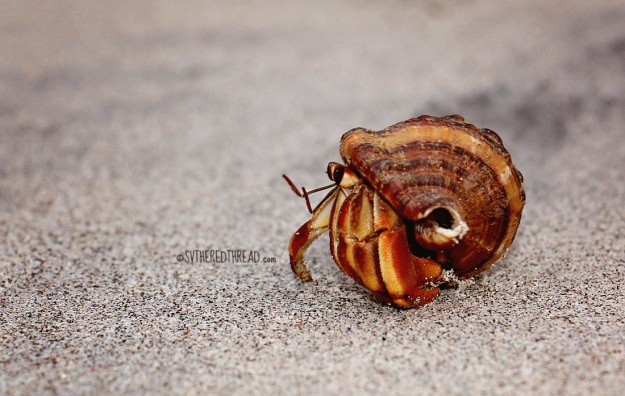 The pulse of the beach was palpable, as the little souls rushed past one another. All busy doing who knows what; going who knows where. Like high rises above the hectic streets of New York City during evening rush hour, we watched as citizens of the city raced hurriedly below. 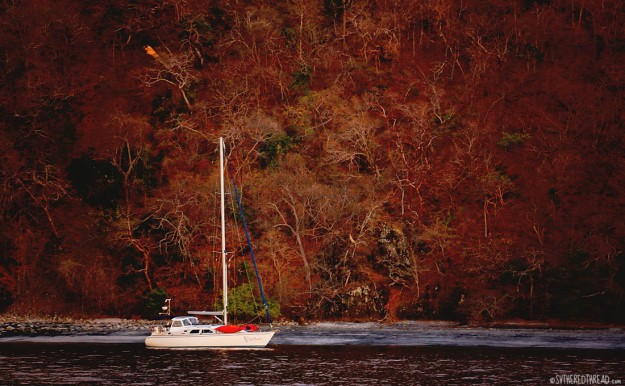 The energy of the sun is fading. As it descends westward beyond The Red Thread, it bastes the eastern cliffs with a honey glaze, turning the shoreline to amber. This light makes northern Costa Rica look like the Pacific Northwest. It’s wonderful. That this sunset followed our first overcast day in well over a month only adds to the likeness of home. 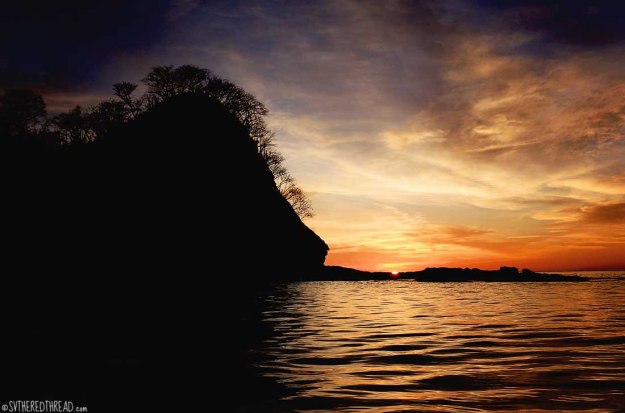 10 thoughts on “Howlers and hermits at Huevos + Ep. 5 VIDEO”