After six days in Playa Panama, we weighed anchor and motored a few miles north to Playa Iguanita, the northeastern most anchorage in Bahia Culebra. Devoid of the panga-tethering mooring balls and tourist boats that characterize the other bays, the unspoiled space of water and blonde beach were welcome sights. We’d been enjoying our time with s/v Meridian and were delighted that they bounced to the new bay that morning as well.

What no one tells you about northern Costa Rica is that it does not really resemble the tropical wonderland in the images that populate when “Costa Rica” is googled. At least not during the dry season. Have you heard the term tropical dry rainforest? You may be wondering, “Is that an oxymoron?” Nope, it’s a new term we learned here. Northern Costa Rica, like much of southern Nicaragua, is hot but drier and less lush than the central regions and Caribbean coast. 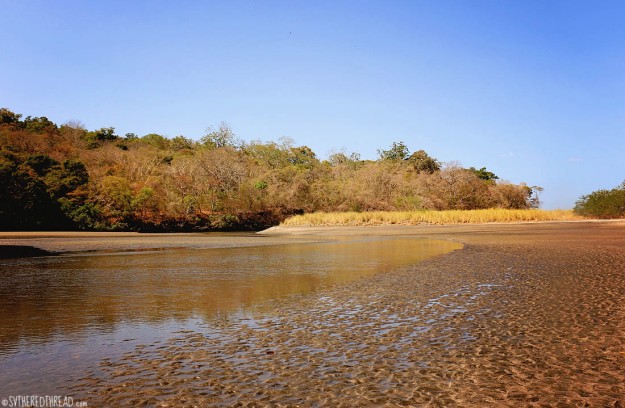 Hot but not too bothered
We were still two months away from the rainy season, and the sun scorched the landscape daily. The Papagayo winds whipped the mast, the sheets, and our nerves relentlessly. As undesirable as 20- to 30-knot winds are in an anchorage, however, they were the only reason the cabin temperature ever dipped below 95 degrees Fahrenheit during the heat of the day. The days were long and sweltering, but fortunately, we were strangers to sweating continuously no more! We dripped, complained about our saturated and musky skin only intermittently, and simply got on with things. There was exploring to do, after all. 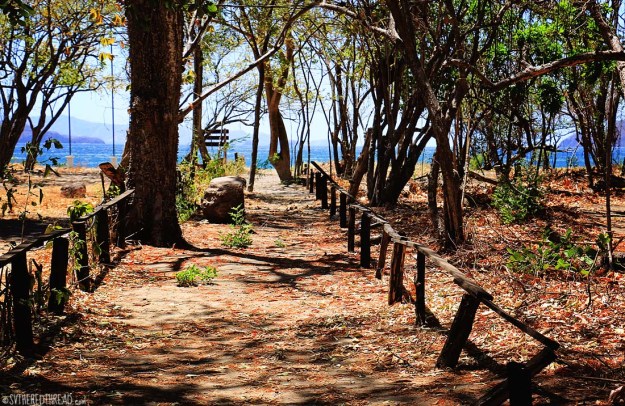 We heard howler monkeys from the anchorage the evening of our arrival, their demonic roars echoing across the water, and were eager to seek them out in daylight. The playa (i.e., beach) is part of Refugio Nacional de Vida Silvestre Iguanita. The parks’ boundaries encompass a series of campgrounds, trails, and an estuary, all with interesting potential for exploration. Dawn broke and before the heat paralyzed us aboard our boats, we pressed mugs of coffee, an essential start to even the most tropical of days; launched Miss Sassy; and met the Meridians ashore.

The beauties of Iguanita
Our nature walk blessed us with sightings of lovely yellow-bellied birds, who danced rapidly from branch-to-limb; long-legged seabirds who idled along the sands, where the ebbing waters receded toward the sea; vultures waiting patiently in the trees to pilfer the breakfasts of others; and complex sounds of winged friends hidden in the trees beyond our view. We followed disconcertingly human-like paw prints of monkeys who had apparently taken a walk along the beach before our arrival. The imprint of a tail trailing behind provided reassurance that the marks were indeed made by our tree-dwelling cousins and not some feral, stubby-fingered man child running wild in the Costa Rican tropical dry rainforest. By the end of our nature walk, our hope for a sighting of howler monkeys was realized, though our only glimpses were from afar. 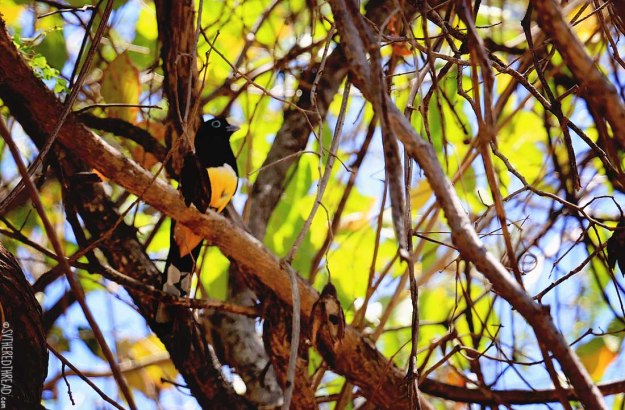 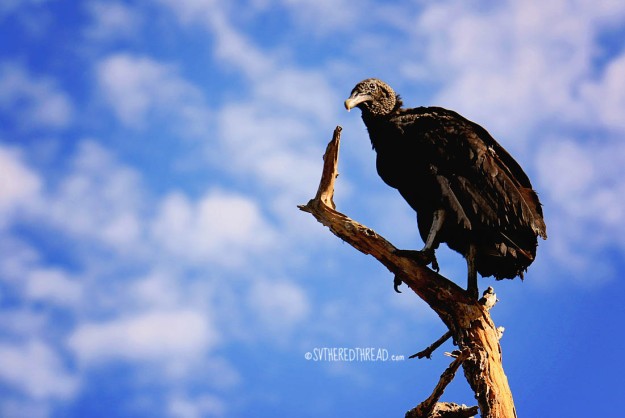 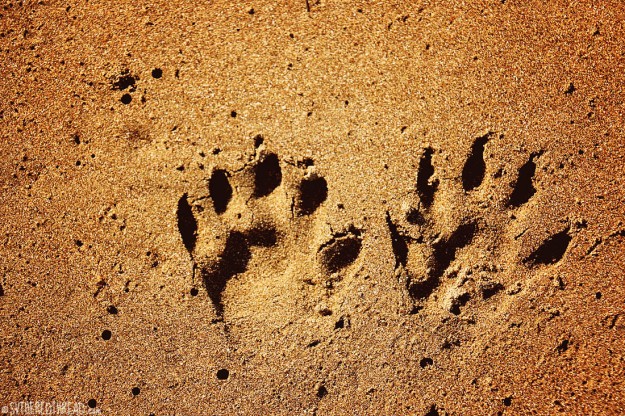 We walked along the beach, our toes sinking deep into dark, spongey sand. We spotted an almost-invisible entrance to a small estuary in the eastern corner of the bay. In our opinion, the loveliest anchorage in the bay received the least amount of attention in our guidebooks.

The ebbing tide allowed us to venture deep into the small estuary. The water we traversed was only calf-deep and the lush mangroves surrounding the water contrasted dramatically against the browns and grays of the dry-season flora and fauna beyond the fen. As lovely as our exploration was, we felt like utter imbeciles to learn the following day that a park ranger had been injured severely by a hungry crocodile while taking exactly the same stroll a year prior. Our exuberant naiveté was undeniable (see photo below). We blame our foolishness on the fact that we skipped by all of the estuaries in Mexico and were novice inlet explorers. Will know better next time; thankful to have survived with all limbs intact. 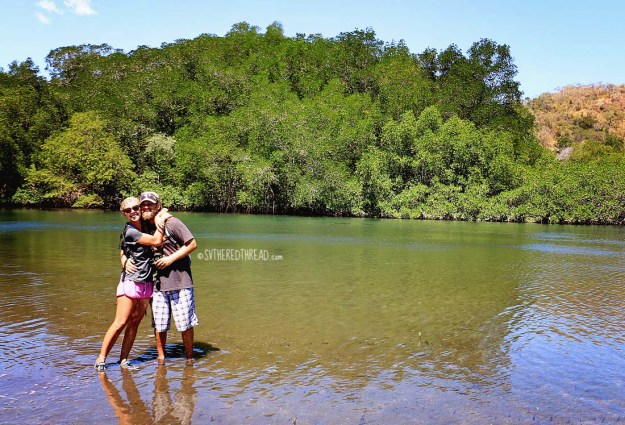 During our walk, we also met two Tico (i.e., Costa Rican) couples who were enjoying a long weekend of camping. Dominque’s Spanish was by far the best of our posse, but as a group, we managed to Spanglish our way through a friendly conversation that ended with their offering us pastries they’d fried in camp and us sharing dried apples from my mom’s tree in Utah.

Little did we know that just hours later, Neil and Heinz would rescue a fishing panga that had chafed thru its anchor and was drifting toward the open ocean during the peak ebb in 20-knot winds. It turned out to be belong to the kind people we’d met in the forest. Their panga and outboard, very valuable possessions, would surely have been lost had the men not sprung so rapidly to action. Their generous thanks, a Rapala fishing lure. That night, we invited the Dominique, Heinz, and Margrit aboard for dinner and enjoyed a laughter-filled evening over red wine and Mexican Train dominoes (thank you, s/v Sea Rover II, for introducing us to the game back in Mexico!). 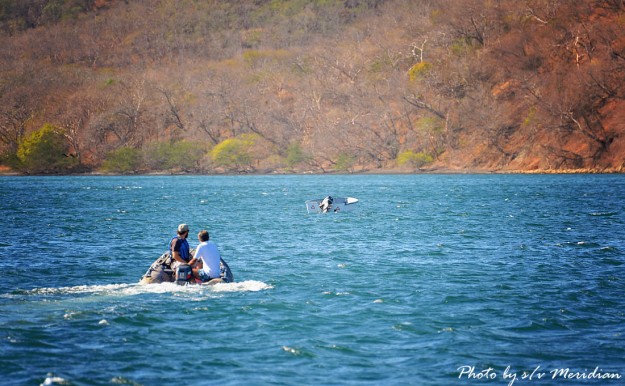 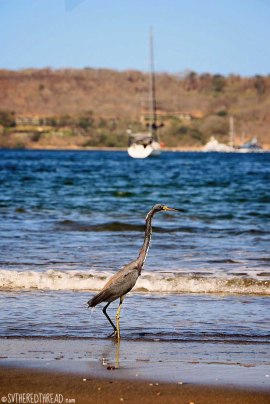 On a mission for monkeys
Several days later, after some “fun-filled” days or boat projects at Marina Papagayo a few miles to the west (more on that coming in our next post…), Neil and I returned to uninhabited Iguanita and continued our quest to find monkeys. The bay had other surprises in store, however.

Like a scene out of a Planet Earth episode, we interrupted a hawk in the midst of slaying a balloonfish and witnessed a tri-colored heron snatching fish from the surf.

We also met a local fisherman, a friendly man, who was angling with the simplest of tools: a knife bound with duct tape to a long stick and a wooden plank to shove between the chompers of any crocodile who threatened attack. 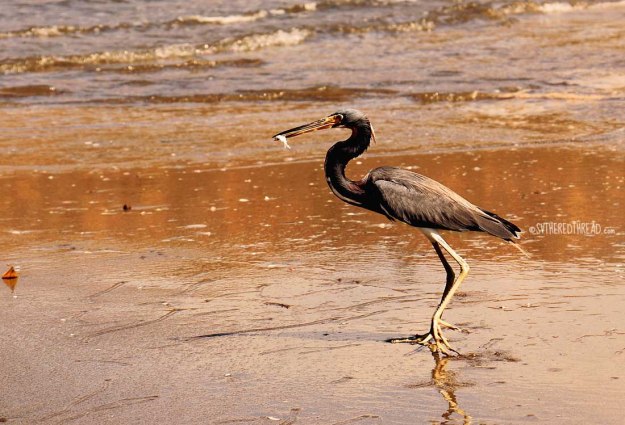 When our paths crossed, the fisherman had speared a round stingray, not his intended target but an unexpected delight no less. I felt secretly hopeful that he might offer to share the beast. We’ve heard that the wings are delicious when prepared similarly to scallops. Alas, I was contented with a couple striking if not morbid photographs.

Cruising commentary
Iguanita quickly became one of our favorite anchorages. The lovely stretch of beach, pretty estuary, and interesting wildlife make it worthwhile a stop. The dinghy landing is also easy, so long as you avoid the area near the estuary, where the current becomes confused. The holding in all bays in Bahia Culebra is remarkably good, even in the heavy winds. There are no services available at Playa Iguanita, so provisioning should be done in advance. Regardless, Iguantita affords easy access to several other nice anchorages, including two where supermarkets are accessed with ease (i.e., Playa del Coco, Playa Hermosa). It is also very close to Marina Papagayo, where clean fuel and other services can be accessed.
Bahia Iguanita anchorage waypoints: 10°37′.586 N 085°37′.848 W or 10°37′.557 N 085°37′.863 W