Our time in La Cruz de Huanacaxtle had lasted weeks longer than we’d anticipated as we worked to tackle a number of repairs, and as much as we liked the charming little town, we both had very, very itchy feet.

A whale tail goodbye
Hauling up our anchor and setting forth on a passage felt wonderful! We witnessed a final show by Banderas Bay’s humpback whales, the last whales we’d see for a thousand miles. We flew our new-to-us spinnaker for hours that day and savored the sensation of feeling wind in our sails once more. We hooked left around Cabo Corrientes and planned to make our next stop in Tenacatita, some 120 miles south. 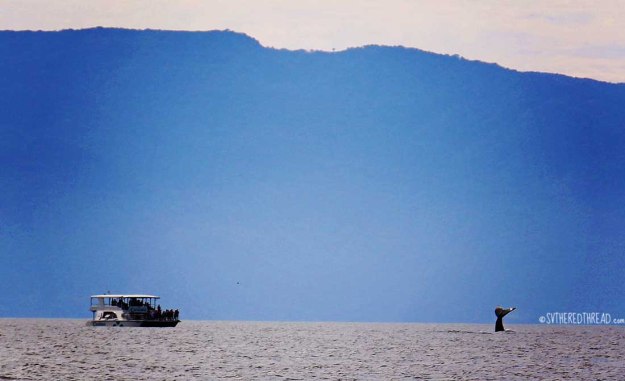 The sunset was like a flaming tangerine, and a pod of rough-toothed dolphins joined us as we said goodbye to the daylight. For the first time, we heard the voices of the dolphins who played in our bow wake; their joyful squeals and clicks were audible above the water. 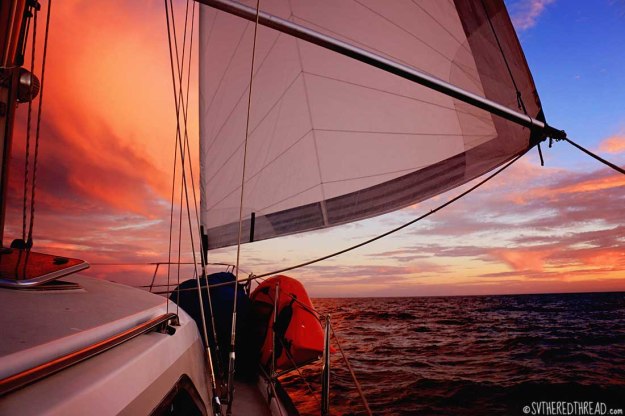 A reefing fiasco
Winds and seas built as the night progressed. We had already reefed our jib and agreed it was time to bring down some of the main as well. Although our in-boom furling system boasts the ability to reef when sailing downwind, we’ve had better success heaving-to instead. We readied ourselves and our sails for the maneuver. Wind conditions escalated rapidly into the mid-30s and shifted direction, such that when we heaved-to, we found ourselves in beam seas. What’s more, our in-boom furling system did not cooperate in bringing down sail smoothly. More than a few explicatives were shouted into the darkness, as I struggled with the lines and Neil wrestled with the helm. After two attempts, coming out of the heave-to, and heaving-to yet again, we succeeded with getting an ugly reef in the main. We would later discover that our problems were likely due to the earliest of my rookie sail repairs, which was causing increased friction where our battens meet our bolt rope. Our buddy boat for the evening, s/v Sarita, would later chuckle about the light show we gave them at 2 am. Certainly more amusing for them to watch than for us to perform!

A change of plans
Neither of us slept well and when the winds became southerly midmorning, we abandoned our plans to press toward Tenacatita. The winds were telling us to go to Bahia Chamela, and we heeded the advice, knowing that to reach our original destination, we’d be forced to motor into the wind. We accepted that most of the time, Mother Nature calls the shots, and we set our sails on a beam reach for Isla Pajarera, a small, rocky island nestled in Bahia Chamela just a few miles from the beach. 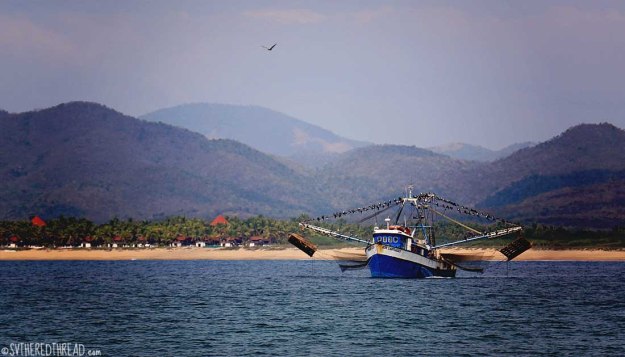 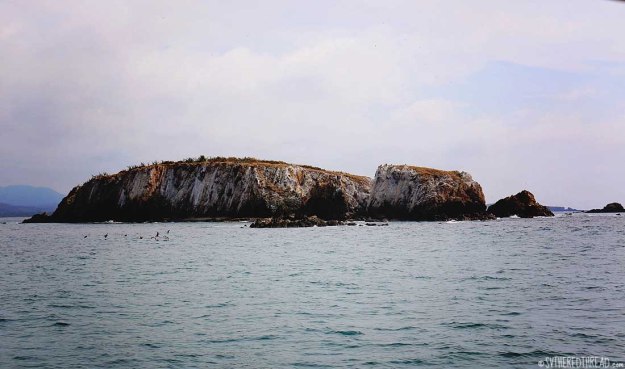 We anchored in 20-feet of water under uncomfortable conditions. Sea swell wrapped around the westernmost point of the small island, causing The Red Thread to lurch and roll. We might’ve been tempted to try to press on to Tenacatita, but exhaustion and the presence of our friends on s/v Sarita just a stone’s throw away made bearing the bumpy anchorage quite appealing. Neither of us had the energy to set out exploring, so we crammed a few bites of noontime breakfast in our mouths and went to sleep. We woke up in time for the sunset, another meal, and an early bedtime. 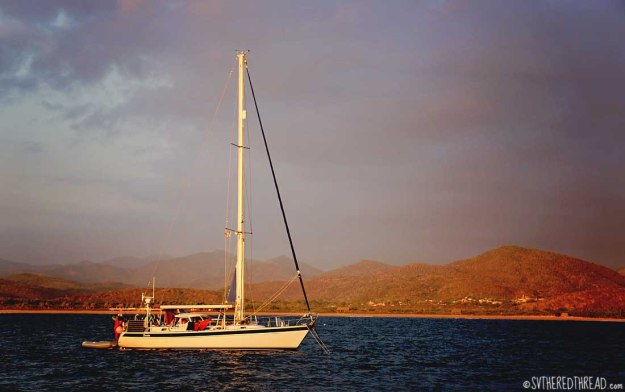 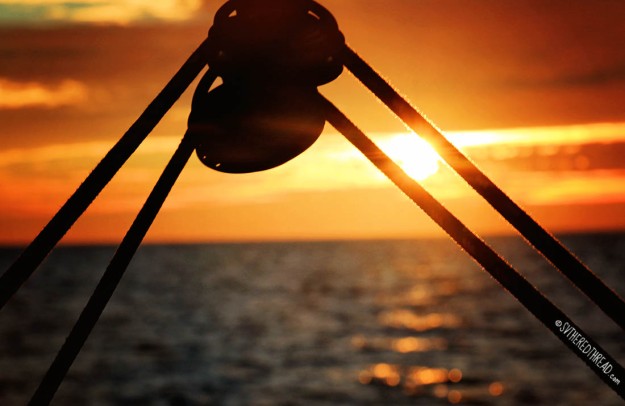 Snorkeling in Chamela
With the dawn of a new day, the seas had calmed and our motivation to venture off the boat was renewed. We pulled on our neoprene boots, flippers, and snorkels and swam from the boat to the rocky crags of Isla Pajarera. An undersea vista of urchins, angel fish, and other brightly colored creatures danced before us. Scales shimmered with a hologram-like splendor as oddly shaped fish swam to-and-fro through the water. Hundreds of tiny, translucent cerulean fish gathered around me, and my noodle and I did our best to remain still and merge with their world. Neil, the more adventurous underwater explorer, dove the ocean floor for closer looks at those creatures whose comfort zone was nearest the sand.

We swam the distance back to The Red Thread. The swell had increased some, and we fought current that tried to force us back near the rocks. I pulled my dripping, exhausted body up the swim ladder and rinsed the salt from my hair. It was a lovely afternoon. We rounded out the day with dinner and drinks with the crew of s/v Sarita and two of their friends, T.C. and Kelly, who were visiting from Washington. 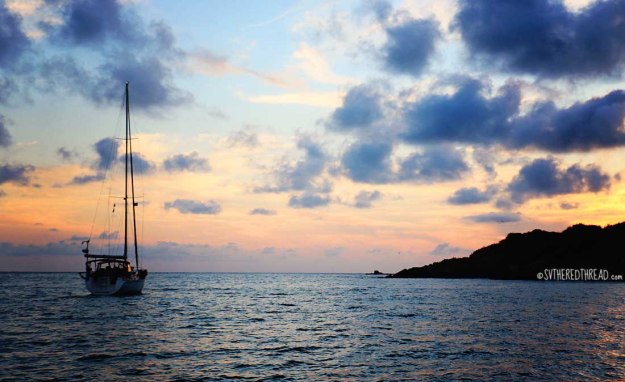 At 2:30 am, we weighed anchor and set sail once again, this time for the fabled Las Hadas, a picturesque anchorage just outside Manzanillo.

Passage perks
Point of departure: La Cruz de Huanacaxtle, Mexico – 01/26/15
Point of arrival: Isla Pajarero, Bahia Chamela, Mexico – 01/27/15
Distance traveled: 110 nautical miles
Total time: 26 hours
Engine roaring: 4 hours
Sails soaring: 22 hours
Average speed: 4.2 knots
Jessie’s musings: Sailing offers a juxtaposition of adrenaline-bursting fear and awe-inspiring beauty, sometimes within hours or even minutes. Hearing the voices of the dolphins who raced alongside our boat at sunset left me with a feeling of intimacy with the sea. Just hours later, I was cursing the high winds that had not been forecasted and the uncomfortable motion of the waves. If we had not chosen to make ourselves vulnerable to the unexpected challenges of this lifestyle, we would not have the opportunity to be graced by the extraordinary gifts of this experience.
Neil’s reflections: Sailing under spinnaker is truly spectacular. With light air caressing us, we plodded along at a nice 3 knots, enjoying watching the whales breaching to the south of us. Though the night offered a significant challenge in sail reefing, we had been making excellent time in the larger than forecasted near gale force winds. If you asked, I’d tell you that I love sailing in 12-18 knots of wind on a beam or broad reach. The Red Thread settles in and just hums along through the water. Bahia Chamela offered us a spectacular snorkeling experience, where for the first time I got to see a leopard colored sea urchin. The best part, of course, was sharing a glass of scotch under the stars with Richard from s/v Sarita. “Here’s Tae Us. Wha’s Like Us?…Damn few, and they’re a’ deid! Mair’s the pity.” –Robbie Burns

6 thoughts on “Whales, sails, and getting back on the horse”