We weighed anchor and departed Santa Barbara on a breezy, blue-sky morning. It felt surreal to be back underway after our heart-wrenching trip home to Seattle. When we arrived back at The Red Thread two evenings earlier, we were greeted by a silly “Welcome Home” poster and colorful, homemade stars dangling from our ceiling, all of which had been crafted by 13-year-old Journey from s/v Namaste! We were thankful for our cruising buddies’ support and appreciative that they had been willing to look over the boat in our absence. S/v Namaste had continued south a week earlier, and we looked forward to our paths crossing again somewhere down the coast!

Neil described a sense of relief that our voyage was indeed real; that it hadn’t been a dream. We had missed our sailboat home, and we pulled out the sails at the earliest opportunity. After two hours of tacking back and forth before the Santa Barbara waterfront and making no progress toward our destination, however, we fired up the engine. We had roughly 25 miles to go to reach Smugglers’ Cove on Santa Cruz Island and weren’t particularly keen on arriving in a remote anchorage after dark. 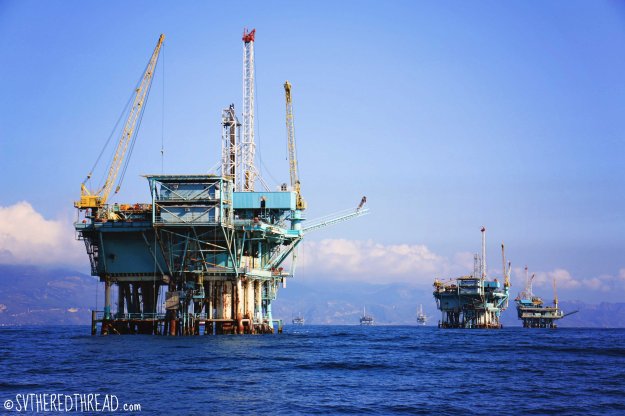 In the distance, we could see the lumbering outlines of behemoth oil rigs. Their presence along the horizon is jarring, like an army of post-apocalyptic robots marching across the surface of the sea. They reminded Neil of creatures from the “War of the Worlds” science fiction novels. More than a dozen are spread from one end of the Santa Barbara Channel seascape to the other. Some appear to be actively in use, while others appear worn and neglected, as if long ago abandoned. The third largest oil spill in American history occurred here nearly 50 years ago. I find it difficult to not feel disgusted by the sight of these hulking structures. I accept that ours is a world whose technologies necessitate certain types of fuel, but seeing these beasts and being aware of the decades of damage the Santa Barbara oil spill caused the creatures in these waters leaves me feeling cynical. The sight of them makes me appreciate all the more the massive windmill farms that stretch along the desert cliffs between Los Angeles and Palm Springs.

As the afternoon waned, winds shifted in our favor, and we hoisted our sails and saw three whale spouts far off in the distance. Winds rushed around the easternmost tip of the island, climbing to 22 knots, before subsiding to the low teens as we tucked into the lee of Santa Cruz Island. Our anchor dug deeply into the sandy bottom on our first attempt, and we watched the last flecks of light leave the sky. There was but one other boat in the anchorage. Peace. A gentle breeze dancing on top of the water, and the rhythmic sound of waves crashing on the shore was our serenade.

Thus far, our South Pacific Stitch has taken us in and out of the busy harbors of San Francisco, Monterey, and Santa Barbara. By dawn, we were the only boat remaining in the anchorage. Today, for the first time ever, we stared down thru clear, turquoise water and saw the outline of our anchor chain laying heavy on the sand bottom. Although we had anchored well over 50 times prior to leaving on our journey, all of our prior anchorages were either in water too deep or too dark to be able to examine the set of our anchor. Here, in a desert island off the California coast, that changed.

We brewed our coffee early, eager to set out exploring Santa Cruz, the largest of the Channel Islands. Neil launched one of our kayaks, and I climbed aboard our standup paddleboard. We rode the surf into shore, effectively drenching the gear we’d stored in the aft compartment of the kayak. Learning to beach our toys in surf will require some more practice! We hiked northwest from Smugglers Cove and summited the ridge that divides the island’s northern and southern halves. From the apex, we could see mainland California to the north and Anacapa Island to the east. There were a few other hikers who had taken a ferry from the mainland, mostly tourists wearing fancy day shoes and carrying pretty umbrellas. The exception was three guys who’d traveled for a womanless weekend of camping. We spent a while chatting with them as they cast their lines from the beach, fishing successfully for surfperch. Our stop on Santa Cruz Island was among the first moments of our travels thus far in which we felt completely relaxed and at ease. We were surrounded with natural beauty and had nothing to do but take it all in. 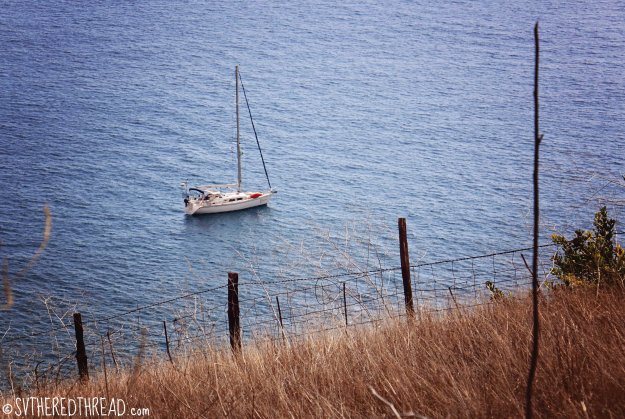 Passage perks
Point of departure: Santa Barbara, CA – 11/14/14
Point of arrival: Smugglers Cove, Santa Cruz Island, CA – 11/14/14
Distance traveled: 34 nautical miles
Total time: 6 hours
Engine roaring: 4 hours
Sails soaring: 2 hours
Average speed: 5.7 knots
Max speed: 7.5 knots
Jessie’s musings: My favorite part of this stopover was waking up being the only boat in the anchorage and having an opportunity to explore a place that felt remote. Our trip thus far has been full of cities, and I’ve been looking forward to experiencing the serenity more remote places. Smugglers Cove was just the ticket! Thanks for the recommendation, Jared and Surang!!
Neil’s reflections: Waking up in Smuggler’s Cove and seeing the anchor chain lying 30 feet below the surface of the water was really incredible. Though we saw whale spouts, there appears to be a conspicuous lack of marine life in this area that is both disappointing and concerning, as if issuing a warning. This drought of marine life is precisely the opposite of everything we have heard about the Channel Islands. The high cliffs reflect the morning sun beautifully though, and the rhythmic pounding of the surf makes this place feel very remote and romantic.