A blanket of damp, broiling heat enveloped us as we exited the large sliding doors at San Jose International Airport. Unlike our rookie cruising season, which began at 48° north and ended over a thousand miles south of the Tropic of Cancer, we wouldn’t have an opportunity to gradually acclimate to the tropics this year.

We’d had a long 24 hours of travelling from Utah to Las Vegas to Houston and, finally, to San Jose. Unlike our departure from Costa Rica six months earlier, we opted to hire a shuttle to drive us the four hours to Quepos, rather than try to wrangle our luggage in-and-out of chicken buses. Sweating, Neil pushed our overloaded cart, while I schlepped our backpacks. Our luggage was cumbersome to say the least. We checked six bags of boat parts, personal belongings, and miscellaneous supplies from the US, as well as three large carry-ons. All-in-all, our baggage weighed more than 350 pounds! Over 500 feet of line, a 20-lb stainless steel rudder gudgeon bearing, engine mounts, and dinghy wheels were among our heftiest items.

Shuttling had the added perks of a brief tourist stop to see the gargantuan crocodiles at Rio Tarcoles and, more importantly, the option to stop at a large grocery store, where we could complete our first major provisioning run in preparation for our Pacific crossing.

Home sweet boat
We arrived at Marina Pez Vela beneath a waning sun on a breezeless afternoon. The still, humid air clung to our skin in beads of sweat. Two large modern building overlook Marina Pez Vela, and as we walked around the southernmost of the two, we spied the mast of The Red Thread. The marina’s clientele are almost exclusively sport fishing vessels; her spire was unmistakable. I could hardly contain my emotions, as we rambled in atrophied Spanglish to convince the security guard to let us down the dock to our boat. I leapt aboard in tears and kissed her helm. At long last, we were home.

Moving back aboard
Our June decommissioning had been intense, and we anticipated a mountain of tasks to recommission The Red Thread. After all, we weren’t waking her from hibernation to day sail the bay. We have an ocean to cross! Our haulout was scheduled for 36 hours after our arrival, so we wasted no time beginning the work of cleaning and putting her back together. Thanks to the good stewardship of Tim with Quepos Yacht Care and the industrial dehumidifier that resided aboard in our absence, The Red Thread’s interior and exterior were in excellent condition. We began the process of unpacking all that we’d sealed and stowed before our departure, finding homes for the many items we’d brought back with us from the States, and stowing the immense amount of food we’d just purchased.

Boats are a menagerie of obscure oddly sized compartments and cupboards, where items can easily be swallowed up and forgotten about for years. I catalog all of our food and major supplies in a spreadsheet, thanks to theboatgalley.com. It’s a time-consuming endeavor, but when I want to find a tub of Nutella or a jar of black sesame seeds, I will not have to tear the boat apart in heaving seas! That reassurance is worth all the upfront hassle to me!

In the first 24 hours, we also needed to find a place to sleep while our boat was out of the water, as living aboard in the boatyard is not allowed…

A fish out of water
Hauling a boat out of the water tends to spur a mixture of emotions for boat owners. On the pleasant side, there is excitement that the vessel is going to get the marine equivalent of a spa treatment. Not so lovely is the anxiety that a mishap may occur during the lift or launch that may damage the vessel. Perhaps even more ominous is dread that the bill will exceed your best ballpark estimates, as it almost always does. We were no different, and our tummies were tight as we steered the boat into the lift slip on January 6th.

A marina employee stripped down to shorts and a snorkel next to the 100-ton travelift and shimmied down into the water. He dove beneath The Red Thread’s hull, ensuring that the large straps that would suspend her from the sea moments later were situated properly, which was reassuring. We gave direction concerning placement from the decks above, and then held our breath as we felt The Red Thread tense, as all 15 tons of her were lifted higher and higher, until not even her keel skimmed the water.

Only a boat owner can appreciate just how disconcerting it is to watch your precious vessel be lifted from the sea, cradled by just two canvas straps. The crew at Marina Pez Vela completed the lift flawlessly and within minutes she was secured on stilts and blocks, ready to begin her week at the spa.

Hard yard days
While she settled in “on the hard”, we got busy. Marina Pez Vela would be helping us to tackle a number of important tasks to ready The Red Thread for her upcoming ocean crossing. It was time to dig into a substantial list of to-dos. 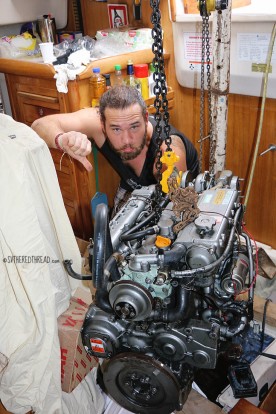 Something so small
Midway through day 2 in the yard, it became apparent that we had three very tiny big problems. Three of the screws that were used to secure the engine mounts had corroded and seized. Unfortunately, because space on a boat is a hot commodity, sometimes key components (e.g., the engine) are difficult to access. Maurizio, the mechanic who worked with us, spent hours upon hours crouched in a tiny ball, his long legs practically up to his chin, trying to loosen them. Penetrating oil, heat, and a variety of other creative strategies were tried without success over the course of two days. The bolt heads eventually sheared off! Drilling out the bolts became the only option. As luck would have it, however, our engine compartment was too small to gain access to actually drill them out. Our only option…LIFT THE ENTIRE ENGINE just to remove three measly bolts! Oy vey […cue discouraged frown and ghastly image of cash evaporating from the bank account].

Everything works out
Eight days after she was lifted from the sea, The Red Thread was splashed. Literally and figuratively, we could feel her hull relax, as she settled back into her watery abode. The dreaded bill came, and it was more than we had estimated before the work began but not as bad as we thought it would be after the bolts required days of additional work and an engine extraction. Unlike some of the boatyards we’ve heard about in Mexico, prices at Marina Pez Vela are comparable to those in the US, which is a tough pill to swallow for two voyagers on a budget. At the same time, we can’t imagine the work could have been completed more skillfully anywhere else. We’d wholeheartedly recommend Marina Pez Vela to any mariners who are looking for a place to have some work done in Central America.

Kudos to crew at the boatyard
To most boatyard crews, a boat is just another day at work. Maurizio, Geiner, Roberto, and Wilson were different. They understood that The Red Thread is our home, and they truly respected how important she is to us. They welcomed us with smiles each morning, kept us up-to-date on the status of the various tasks, taught us about boat repairs we knew little about, and corrected our poor Spanish. They demonstrated work ethic that led us to admire them and skills that made us trust them. We said goodbye to each of them with hugs and promises to keep in touch. Thank you, guys. Your kindness made an enormous difference in smoothing the bumpy week, and your excellent work will keep us safer on this journey.

Tasks…and time with friends
Recommissioning tasks certainly did not end when we exited the boatyard. We needed to repair the bolt rope at the head of our mainsail, unpickle the watermaker, put up our furling jib, and install our new Danard dinghy wheels (which was quite a production). 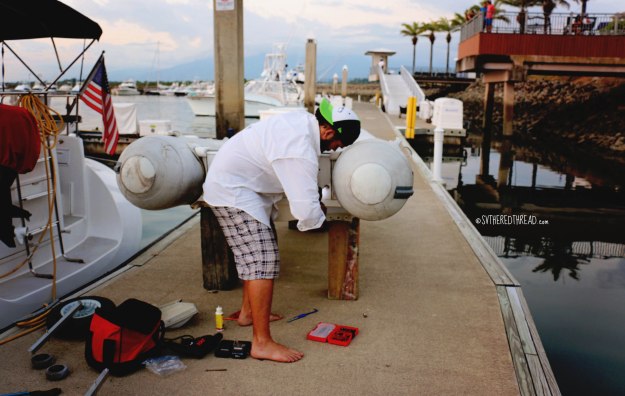 We also wanted to enjoy some time with our Quepos fishermen pals. Although Central America abounds with top shelf rums, Marco was a huge fan of the US-distilled Kracken. As we had promised before we returned home in June, we brought him a bottle as a gift. You’ve never seen someone so ecstatic over mediocre liquor as the spirited Marco! 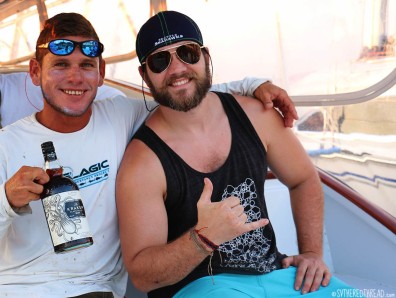 We invited Marco and Bryan, two of our favorite Costa Ricans, aboard for dinner aboard. They brought several pounds of freshly caught yellowfin tuna and their excellent senses of humor, which left us feeling like they were hosting us as much as we were hosting them. Bryan taught us how to make tuna tataki, and the memory of that dish still leaves us drooling.

9 thoughts on “Recommissioning: Days ‘n days in the yard on the hard + Ep. 9 VIDEO”