It was hot. Really hot. The large wooden shutters in the dimly lit room were swung wide open, like old barn doors, splaying sunlight across the floor. A row of tan little boys with thick black hair stood crammed along the windowsill, watching us in silence. The inquisitive gazes that make children so endearing made our ears red. We held back our smirks, doing our best to maintain a state of seriousness. We were sitting across a desk from the Capitania de Puerto, after all, clearing into Honduras. We strive to be respectful and giggling at curious local boys whose faces and skinned elbows were crowded less than two feet from our faces may not have been appreciated. 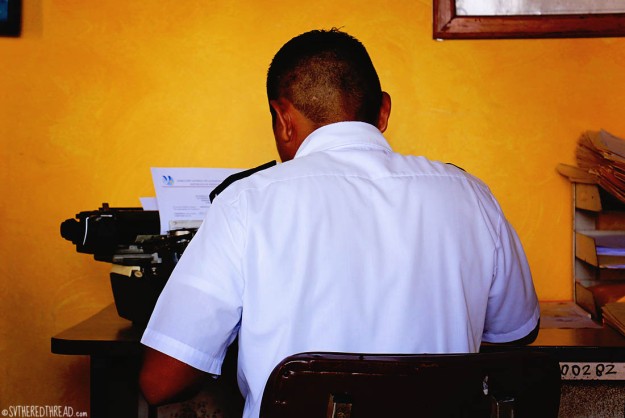 The officer thumbed through our documents and requested our passports, hardly acknowledging the entourage, save a tolerant eye roll. He retrieved a crisp sheet of paper from a filing cabinet, walked across the room, and set the page in a typewriter. As he did so, we snuck big smiles and little waves at the boys.

There was no charge to check into Honduras. The third poorest nation in the western hemisphere welcomes international boats no cost, save the price of a few minutes to ensure that boat registration documents are in order and the photos on crew passports match the faces in front of them. After getting authorization from the Capitania de Puerto, we walked across the hall to meet with Migracíon. The officer stamped our passports and grinned as he handed us a map of the island, before heading back outside to continue conversing with a friend in the shade. Smooth. Simple. Professional. All done in less than 20 minutes.

A few minutes earlier…
We had never med-moored our dinghy, but it looked like that would be necessary. After the 8-mile jaunt from Isla Meanguera, we tied a long line to the grapnel we’d purchased for $20 at a swap meet in La Cruz, hopped aboard Miss Sassy, and sped toward the long, attractive pier that jutted from the shore. Neil steered our dinghy close to the barnacle-clad steps, and I jumped out with our stern line, ready to pull him in after he flung the anchor overboard. Our technique was funky, but it got the job done. 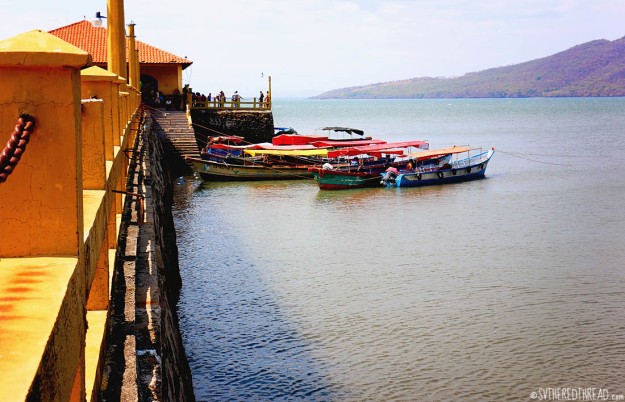 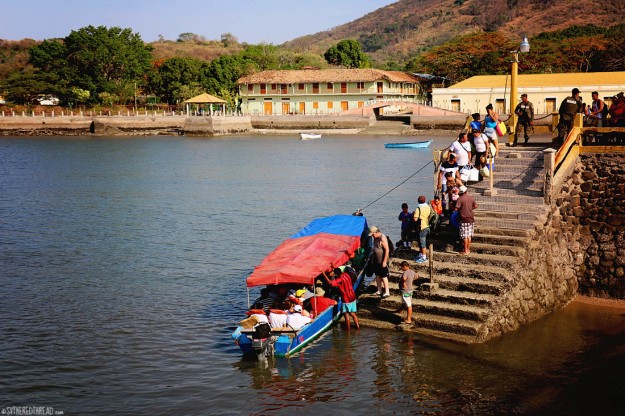 A tiger-less island
Isla El Tigre is a small island. Its circumference is less than 11 miles, but the apex of its volcanic cone looms high above at 2,569 feet. 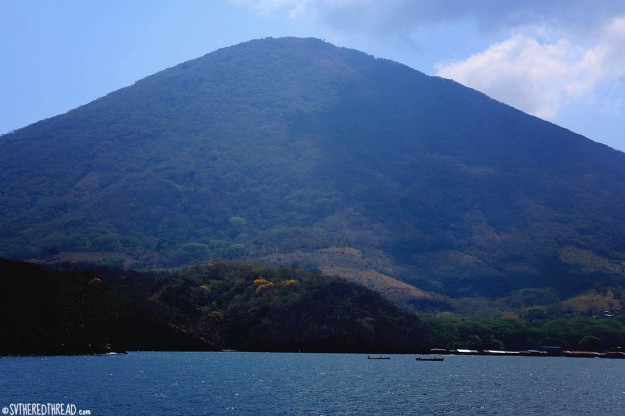 The only town on the island, Amapala, is a relic of the nineteenth century. Once Honduras’ primary shipping port on the Pacific, the town fell into a state of lonely disrepair after the official port was moved near San Lorenzo.Efforts to revive the town were apparent. Colorful coats of fresh paint energized some of the tired facades of the old buildings, there were well-maintained parks, and a colorful playground was filled with young families and laughter just a short walk from town. 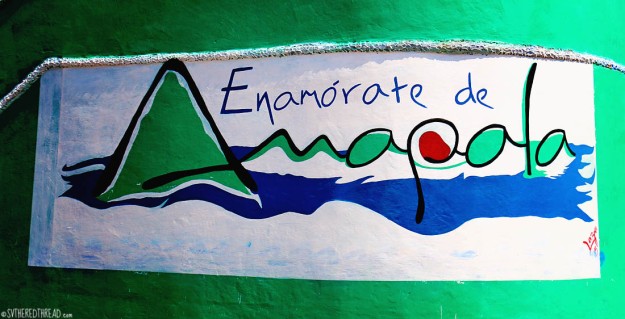 We found an open-air café and ordered two Honduran-brewed beers and shrimp ceviche, an unwise choice given that all ceviche since Mexico had left us begrudgingly disappointed. Mexico’s ceviche is unrivaled. 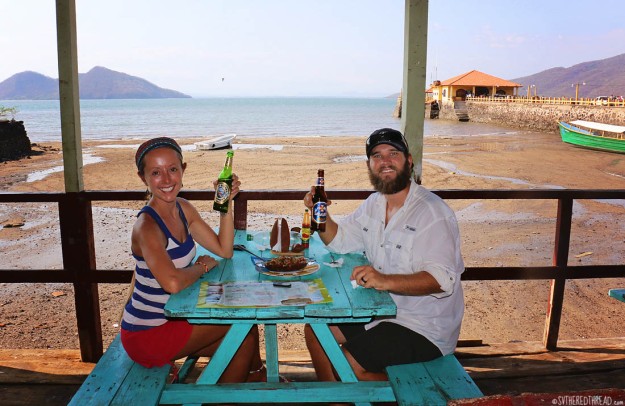 An older gentlemen of 80 years, perhaps more, approached. He was dressed formally in the sweltering heat, wearing a long-sleeved, button-down shirt that was tucked smartly into his trousers. His belt was cinched tightly around his thin waist. He shook our hands and in very good English welcomed us to the island of his birth. 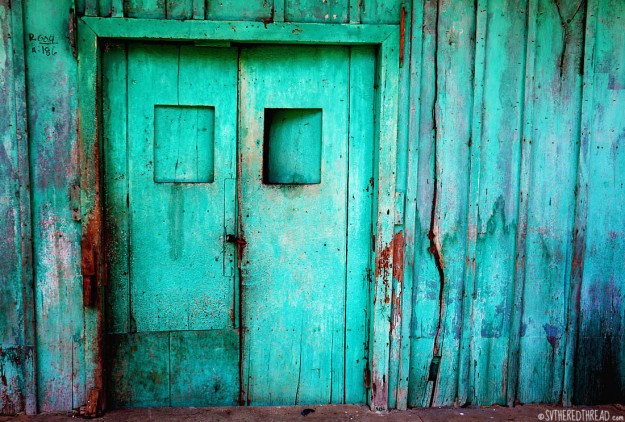 The elderly gentleman shared a few exhilarating tales of his youth, which brought vitality back to an island whose character was masked by peeling paint and colorful, if dilapidated, padlocked doors. He had been a young man when Puerto Amapala was in its heyday. Eager to see the world, he had finagled a job aboard a cargo ship, working in the lowest ranking duties. His job took him to far-flung places across the globe, as he intermingled with persons of other nationalities and worked jobs with increasing responsibility, eventually learning English. Time had aged his bones but not the light in his eyes. He longed share his stories and to practice speaking English but rarely had the opportunity to do so anymore. 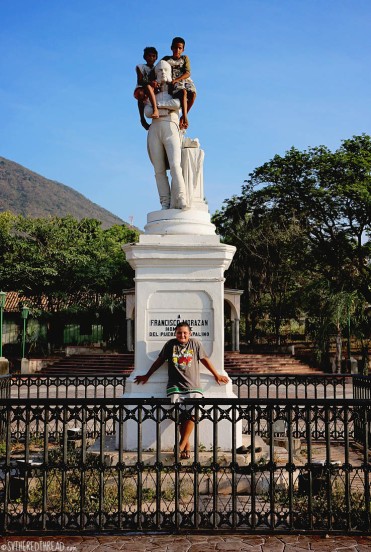 Our tween-age entourage
We walked along the waterfront, enjoying the sunshine but thankful that its energy had passed its peak. Several of the boys who had lined the windowsill earlier in the day caught up with us and joined our stroll. Together, we passed crumbling buildings and colorful doors and wandered thru the parks near the outdoor laundry scrub.

Round-faced, reserved Jimmy was especially memorable. He and his tween-age posse showed off by climbing atop a statue in one of the town’s public spaces and leading the way to the playground. They spoke a little bit of English, and with our little bit of Spanish, we managed to get along quite well! The boys’ company was the highlight of our experience on Isla El Tigre. 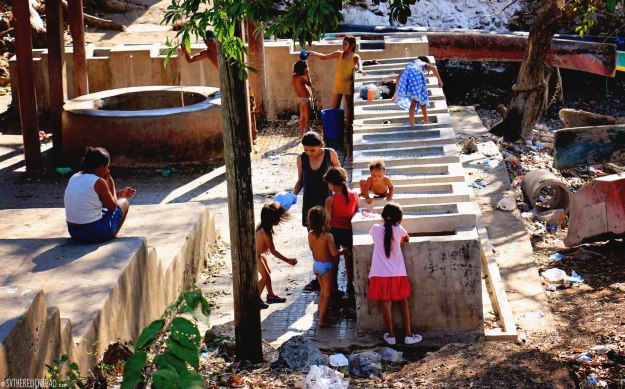 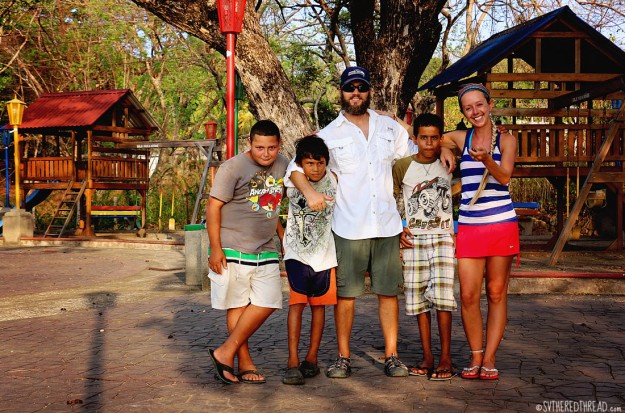 Colors over Conchagua
That evening, we watched a fury of colors fade along the horizon across the Golfo de Fonseca. As the sun sunk behind Volcan Conchagua  on the El Salvadoran coast, we hoisted our Honduran courtesy flag. 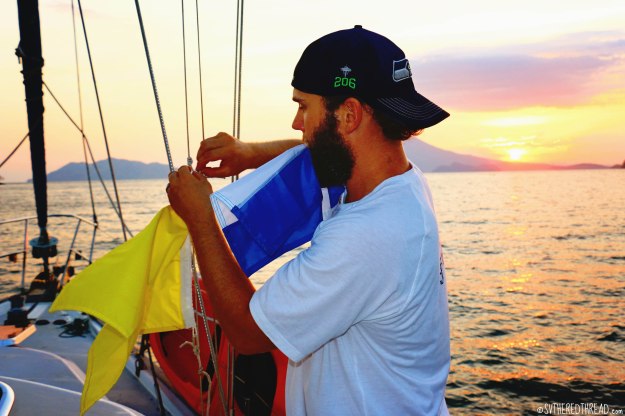 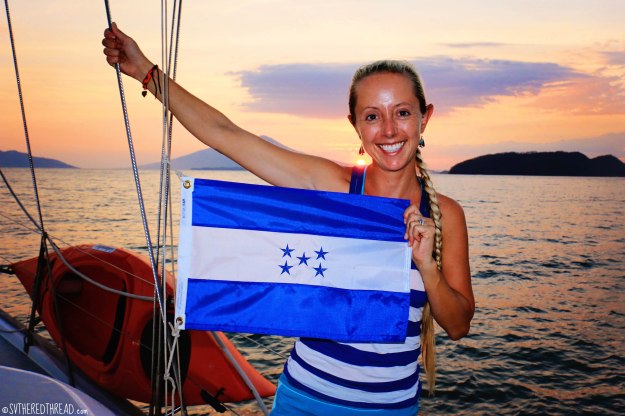 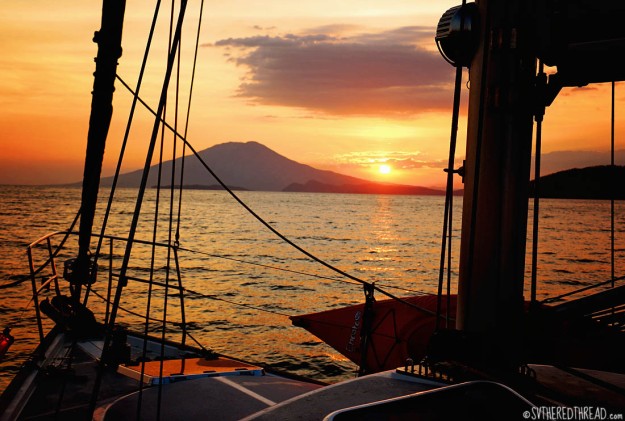 The next morning, we found Jimmy and the familiar faces of his friends waiting eagerly at the pier once again, ready to grab our painter line. We took the boys for ice cream to thank them for their help. We then snagged some street food and hopped a moto-taxi and enjoyed the bumpy ride to Playa Negra, a black sand beach, on the opposite side of the island. 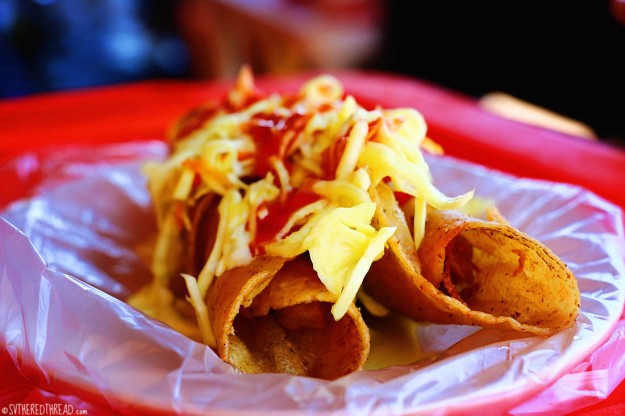 Nowadays, tourism is the island’s sole source of revenue. Visitors come almost exclusively from mainland Honduras, rather than internationally. Tourists from the mainland crowd El Tigre’s beaches on weekends. We were the only gringos to be seen, as we dug our pale toes in the dark sand and waded into the bay to join dozens of others. The water was muddied and murky, but seemed clean enough until we noticed fragments of toilet paper drifting by [Gag…]. Time to sit on the volcanic sand and people watch! 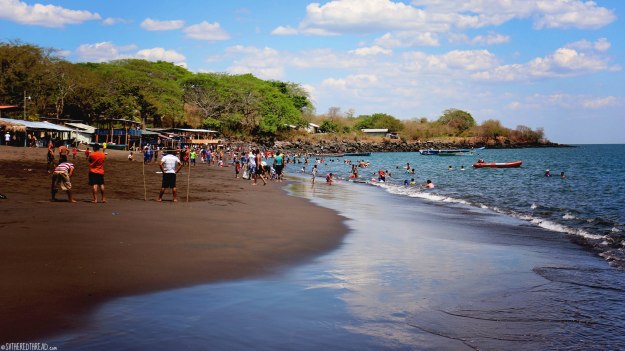 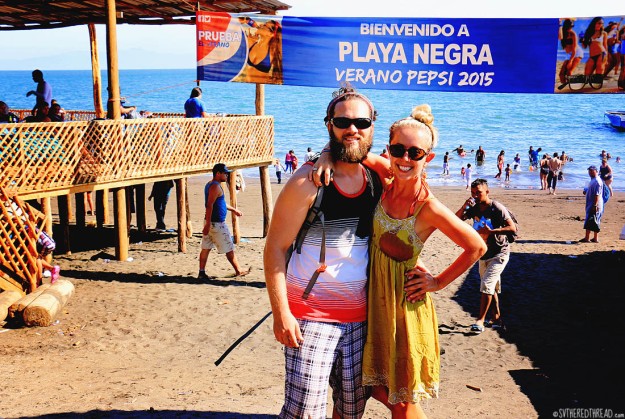 We returned in the late afternoon and for the second evening in a row, we snagged dinner on the muelle (i.e., dock), where a pair of cheerful women sell baleadas. Baleadas are a Honduran dish made of a fresh flour tortilla that is folded and grilled with mashed refried beans and cheese and topped with deliciously oily pickled onions. A tasty meal for two for just 25L ($1.19 USD). 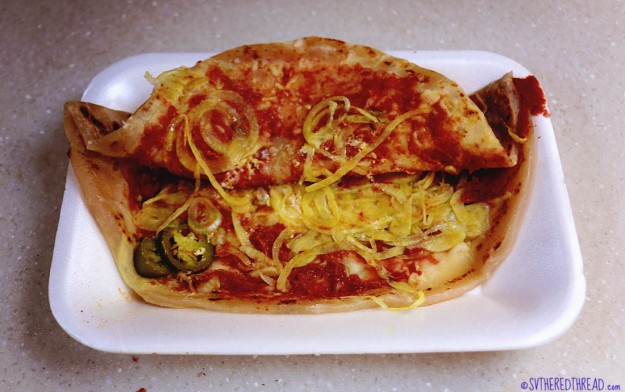 Palms and prayers
Our visit to Isla El Tigre coincided with Palm Sunday and the first day of Semana Santa (Holy Week), when Christians around the world celebrate Jesus’ celebrated arrival in Jerusalem. Although neither of us are particularly religious, the opportunity to learn about and to experience the faiths of others is an honor. We Red Threaders went to church. 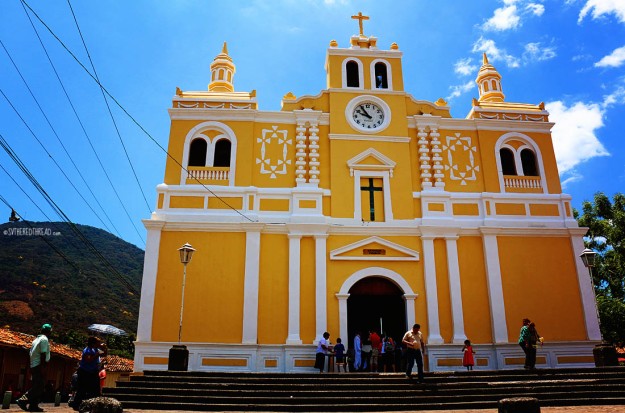 The crown and glory of the town of Amapala is the beautifully restored church that dates to the 1800s. Its warm yellow walls were brilliant before a bright blue sky and puffy clouds. The church was as full as it could be. Worshippers carried palm fronds that had been delicately tied in bouquets or woven into hearts or crosses. The woman to our left separated some of the fronds from her bouquet and handed them to each of us. We less-than-skillfully tied our bouquets, and the woman to our right smiled and reached to help us.

We stood and kneeled and sat and stood, understanding through emotions rather than words. Our Spanish is still sorely lacking. That evening, we gently tossed our palms into the sea, thankful for yet another moving experience. 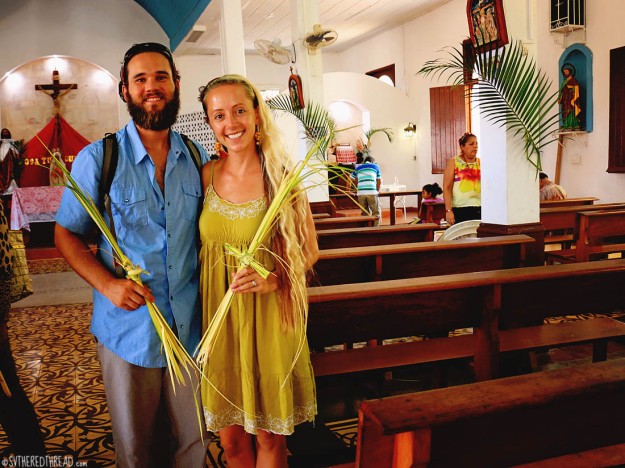 A stop worthwhile
As we said goodbye to the Honduran officials and paid the meager 35 Lempira ($1.75) for our international zarpe, they asked us to please tell other cruisers about their island. Increasing tourism is one of the nation’s primary objectives and likely the island’s only hope of economic survival, since Puerto Henecán stripped Amapala of its role as lead Pacific shipping port.

Officials on Isla El Tigre told us that only 20 to 25 cruisers visit per year – fewer than travel to Easter Island, the most remote inhabited island in the world. Officials in La Union said the same of Isla Meanguera. Is it possible that we had just dropped our hook off some of the least-visited islands we’ll experience on our entire voyage? And in a bay mere miles from the main thoroughfare that southbound cruisers sail, no less?

Do visit Isla El Tigre; eat the baleadas from the joyful women on the pier; and if you meet a boy named Jimmy, please tell him “hello” from Neil and Jessie.